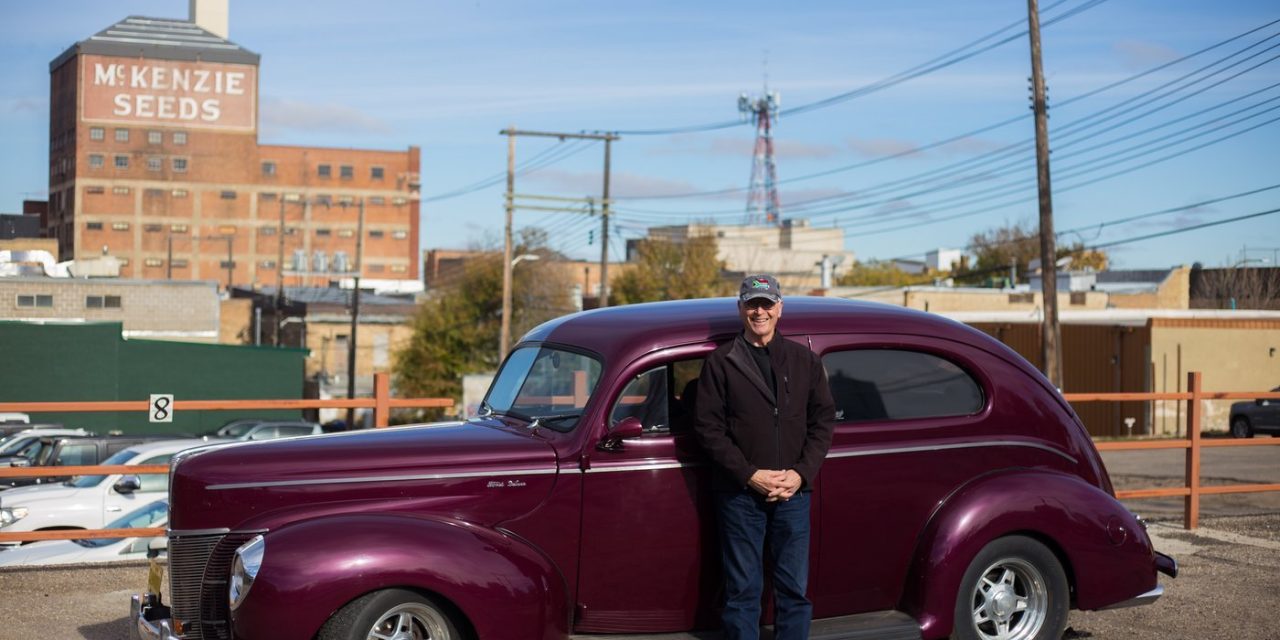 Boasting a one-of-a-kind colour and a ride as smooth as silk, Barrie Wood’s 1944 Ford Coupe Deluxe has been his trusted steed for more than  30 years.

He first found the ride in Saskatchewan in 1987 while at  a home show event. He got to talking to another automotive enthusiast  who soon revealed his connection to the Ford.

On the way to visit  friends in Alberta, Wood made a point of dropping by to check out the  vehicle — he was unsure what to expect in terms of the state the ride  would be in.

During his visit, he found it was in pristine condition.

“I  was expecting to go down behind the barn, but he had it in the shop,”  Wood said with a chuckle. “He was concerned about how I was going to  look after it.”

The body was in prime condition, free of even a  speck of rust. Over the years, he has had torn the coupe apart, and to  this day he has always found it to be rust-free.

The immaculate  condition of the body has ensured Wood did not have to replace anything,  and the coupe still has its original body.

The Ford has been  fully modified, Wood said, explaining it has been stripped down and the  frame removed to add a new front suspension.

Wood said the  modifications to the Ford were designed to make a modern car with a  classic look — it includes disc brakes, power steering, automatic  overdrive transmission and power windows. A CD player is also hidden in  the back, tucked away in the trunk.

Wood added bucket seats for comfort, along with three LED brake lights in the back for safety.

“It’s  got all the luxuries,” Wood said. “It has been a really, really good  car. I have taken it so many places, and I’ve never had a minute’s  trouble with it.”

The Ford boasts a 5L Mustang 302 cubic inch V-8  engine, giving the Deluxe an extra oomph of power and more than 30 miles  to the gallon.

When he first got the Ford, the ride had an old  flathead V-8 engine, and his daughter had a 1987 Mustang, Wood said. He  chose to move the Mustang engine into the Ford.

“It’s a Ford motor in a Ford car,” Wood said with a grin. “I’ve been delighted with it.”

He  added because it is a Deluxe model, it has a nicer grill on the car,  adding to the character of the car and creating smoother curves.

The dashboard of the vehicle has also been modernized and is a fibreglass after-market dash he found in the United States.

The Deluxe has about 100,000 kilometres on it and has been set up to be a car that is a smooth ride and good on gas.

For  now, Wood has no further modifications planned for the vehicle and is  focused on taking it out to enjoy on the highway. He has taken it across  the Prairies as far as Calgary and also attended a car show in  Minneapolis.

He appreciates the car shows because they serve as an opportunity to connect with other gear heads.

Wood is not a mechanic by trade and learned to work on cars through a bit of trial and error, persistence and tips from friends.

“I  installed the motor, the transmission and the differential myself. You  learn as you go and then you learn, ‘well I won’t do that again,’” Wood  said with a smile. “You do a lot of bending and stretching and  climbing.”

He has several unique rides he has accumulated over the  years, including a 1946 Chevy pickup his uncle bought brand-new. He  first got his hands on the truck when he was 14, and he still has it  sitting in the garage.

He also has a 1957 Thunderbird at home and a 1950 Ford convertible that is currently a work in progress.

“This convertible has taken a long time because I’m not as young as I used to be,” Wood said with a laugh.