‘I feel like I’m grandma of all these kids.’

“I feel like Leslie doesn’t get her flowers for what she’s done.”

What she has done—touching the lives of about 2,000 young people in the West End who have been part of her youth employment programs at Spence Neighbourhood Association (SNA) since 2008—has been transformative.

“I feel like I’m the grandma of all these kids,” says Kwok in her office at WestEnd Commons, with photos of some of her SNA kids, as well as her actual grandkids, on the wall behind her.

“It’s not just a love, it’s mutual respect, I believe,” she says.

Rakhshani, 22, was one of her kids. When he was 12 he wanted to make money. There were illegal ways to do it and growing up he saw people go down that path, but alongside Kwok he made money and found preparation for life. He calls her wise—something he thinks she got from being a mom and a grandmother.

“It’s really hard to put into words what those programs did for me. It really changed a lot and opened a lot of opportunities for me,” says Rakhshani, who just completed his bachelor of science, with honours, at the University of Toronto and is mulling over becoming a cardiac surgeon. In the meantime, he’s a partner in an up-and-coming record label—Make It Out Inc..

“I can list a whole lot of things I love about Leslie, but I think the one I like the most is she gives everyone a chance, (she) doesn’t care about your past. She’s only looking at your ambition in life, and she’s looking to build that with you.”

Kwok has also looked to build the community. SNA executive director Lin Howes Barr says Kwok transformed the West End over the past 15 years by leveraging a partnership with the City of Winnipeg to employ local youth at city-owned recreation facilities.

“Almost all people working at wading pools and community centres were from outside the neighbourhood and had never lived in or didn’t understand the West End and the unique culture we have here, now it’s all people who have grown up in the West End,” says Howes Barr, adding that the change means kids now see themselves reflected in leadership roles.

“She’s incredibly tireless, and she shows the same commitment to every youth who comes through the door. She gives every single youth 100 per cent.”

Kwok is quick to list people who came before her, and those working alongside her now, in the two youth training and employment programs she manages at SNA. But she acknowledges Rakhshani’s assessment of her wisdom.

“When it comes to youth employment, yes. I feel wise enough to work with every single youth,” Kwok says.

“I have an intuition about them when they come in. It’s very personal. It’s kind of like a fact-finding mission—you have to find out where they are and where they want to go.”

And when she finds out where they want to go, she helps them opens doors. In Rakhshani’s case, that meant researching and applying for a university scholarship he earned.

Another way Kwok helps ensure youth get to where they want to go is with a strong focus on workplace rights and safety training.

“Leslie always taught us how we should be treated in a workplace,” says Rakhshani.

“She gave us safety training and always taught us our rights…almost like a preparation camp for real life.”

She also instills professionalism to prepare youth for the working world, teaching them to leave personal lives at the door (though Kwok is there to talk in private if they need to) and focus on doing the job.

“It kind of gives them a release,” she says.

Kwok, 62, says she may “semi-retire” around 70, but she could be building the dreams of youth in the West End long past then.

“I’ll probably just keep going as long as SNA wants me to be here.” 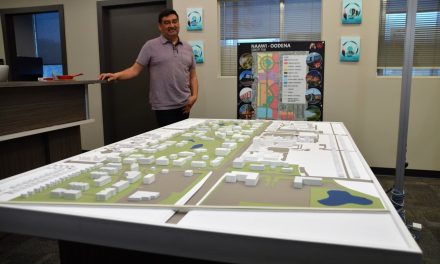