A true calling: Being an RCMP dispatcher can be rewarding 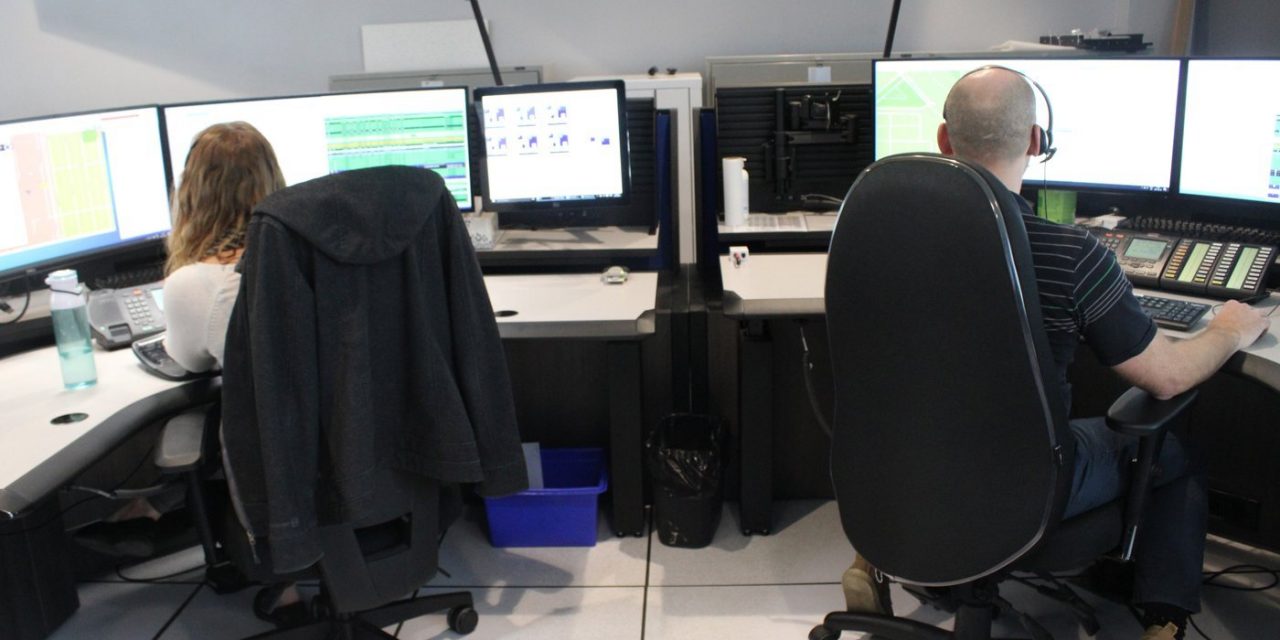 Tucked away on the second floor of the North District RCMP detachment is a spot that could truly be called the nerve centre for policing in northern B.C.

At any given time about a dozen men and women are fielding calls of concern received through the 911 service and relaying the messages to the officers out in the field while at the same time coaxing as much information as they can from people who, in the worst of cases, are fearing for their very lives.

Stressful, emotional, taxing – being a dispatcher is all that and then some. But rewarding too.

“I love it,” said Megan during a break between calls at the centre. (We’re not providing last names for safety reasons).

After years of working on contract, she started looking for something more secure as she approached midlife and gave dispatching a look. That was about eight years ago and she hasn’t looked back.

After about a decade in marketing, Laryssa wanted to make a living in something less mundane. When she heard about dispatching through a cousin of a woman who worked as one, she decided to give it a try.

As of August, she’s been a dispatcher for five years.

“It was kind of on a whim. I was looking for something new, I was bored where I was and wanted a new job. I wanted to do something that helped people and I thought about becoming a regular member as well, but for my lifestyle, this kind of just fit better.

“I found that the adrenalin is what keeps me here, like when you kind of get those big calls.”

By November, Mo will have been a dispatcher for 21 years.

“It’s an interesting job, there are a lot of facets to it,” he said. “One of the things people perceive is that you just answer phones for a living. No, it’s more than that…you get into some pretty neat situations.”

Each stationed in front of a row of computer screens and wearing headsets, dispatchers at the detachment are responsible for taking calls and deploying officers from 100 Mile House to the Yukon border. The computers show who’s available and where they may be – RCMP vehicles are equipped with global positioning systems.

They work 12-hour shifts – two days, two nights and four days off – which has its drawbacks but also its advantages.

“It helps to be a night owl,” Laryssa said while Mo said anyone thinking of becoming a dispatcher will need to consider how well they function in the middle of the night when a major call has come through during an otherwise quiet few hours.

On the plus side, Mo said the four days off means he can spend plenty of quality time with his kids while also giving his wife a break. And because the four-on, four-off rotation moves ahead by one day every block, you can get days off in the middle of the week.

“Instead of having to compete with everybody camping during the weekend, you have Monday, Tuesday, Wednesday, Thursday off and well, it’s not busy,” Mo said.

Being able to type is a must but perhaps most important is an ability to multitask and, according to Megan, it’s harder to come by than many people think.

“They think ‘well, I talk on the phone, I make dinner, and I answer my kids’ questions,'” she said. “But I can be on a call, the (police) radio will come in through my speakers but I’m still talking to the person on the phone and I still have to do what members want.

“We had a file today where we needed police dog services from Prince George so you have to not just coordinate with the members you’re dealing with in that town but you may need to coordinate with search and rescue or fire or ambulance, tow trucks even.”

On coping with the emotional aspect of handling calls that can range from weird to traumatic, all three said they make a point of taking care of them selves – eating properly, getting plenty of rest and exercising. What’s more, they said they simply are able to switch it off at the end of the shift and “not take it home.”

“You sort of have to have the right personality,” Laryssa said and noted that only her and one other of the four who progressed through the trainee program with her are still on the job.

Megan recalled an story that has helped make it all worthwhile. It was when a young boy got separated from his family while out dirt biking.

“He made his way home but the family hadn’t and he was scared for them more than himself – I think he was six years old – so I sat with him on the phone while we’re pinging the dad’s phone,” she said. “While I’m on the phone I’m like ‘let’s go watch a kids’ show, we’ll put on a TV show together, you get yourself a snack’…just being able to be there for him and people like him, where this is their worst, scariest day…that to me is why we’re here.

“You can get called all kinds of names and they’re drunk and they say the rudest things but who cares?

“If you can help that little kid or the grandma that fell down the stairs and needs somebody to get into her building and nobody can get in, or the people that had been in a car accident or the woman who just found her dead husband, and they’re in their worst moment. If you can make it better, I would do this job for the rest of my life for that.”

All will be held at the North District RCMP detachment on Fifth Avenue at Ospika Boulevard and preregistration is a must. For more information, go to bcrcmp911.ca and click on “recruiting events” on the left sidebar.