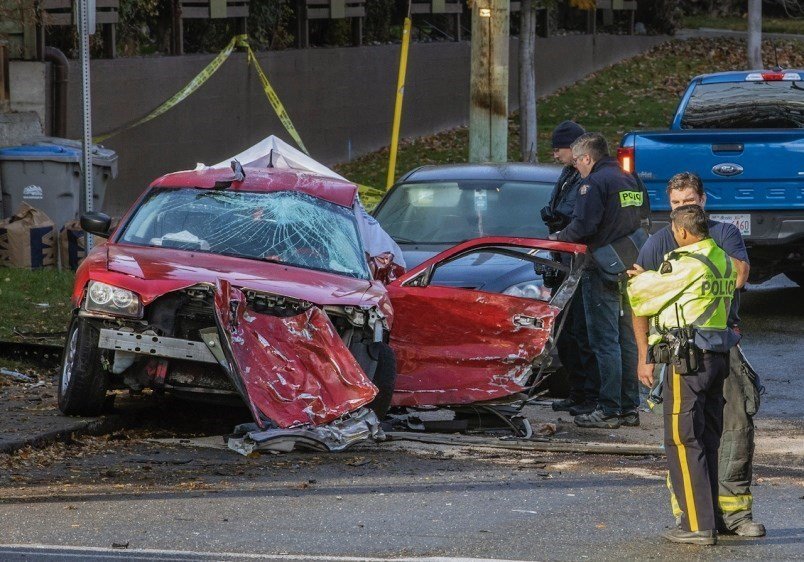 UPDATE:McKnight gets three years in prison for fatal collision that killed three people

A Kamloops man has pleaded guilty to the hit-and-run deaths of three Nigerian students whose car was struck by his truck along First Avenue two years ago.

Reid McKnight, 32, is being sentenced on Friday, Dec. 3, in B.C. Supreme Court in Kamloops on charges of failure to stop at an accident involving death and three counts of dangerous driving causing death in connection with the Nov. 3, 2019 downtown collision.

McKnight was also sentenced for firearms offences stemming from the post-crash investigation. He had been charged with careless use of a firearm and improper storage of a firearm the day after the crash.

An agreed statement of facts and submissions on sentencing are being presented to Justice Kathleen Kerr by defence lawyer Jeremy Jensen and Crown prosecutor Chris Balison.

Killed in the early-morning crash were Daniel Okocha, 22, Feyisola Adebowale, 28, and Oluwatosin Adeojo, 31, all of whom were international students at Thompson Rivers University.

Okocha and Feyisola were in the back seat of the Dodge Charger and died at the scene. Adeojo, who was driving, succumbed to his injuries a wee later. Another person in the front passenger seat survived with minor injuries

A few family members of some of the deceased are appearing in court via video conference.

Emergency crews were called to the intersection of Battle Street and First Avenue at about 1:30 a.m. on Nov. 3, 2019, after the Ford Ranger truck collided with the car.

Investigators said at the time they believed the truck sped through a stop sign westbound on Battle Street before striking the car, which was heading south (uphill) on First Avenue.

According to police, the students had spent the evening in downtown Kamloops and were using a designated driver to get themselves home.

Police said the driver of the pickup truck fled the scene following the crash. The truck was estimated to be travelling at more than 100 km/h.

The vehicle’s registered owner, McKnight, was arrested the following day at a home in Guerin Creek, but released pending further investigation. Police charged McKnight nearly a year later, in September 2020.

McKnight previously served in Afghanistan in light infantry and joined the Kamloops reserve unit in 2017 after 10 years of service.

He was off-duty at the time of the fatal crash.

Court heard McNight believes he will be discharged from the Canadian Armed Forces after sentencing, but had continued to serve until this court date.

The parents of Adebowale and Okocha each field civil suits against McKnight on Oct. 28, seeking unspecified amounts in costs and damages.

Both lawsuits have named McKnight, the estate of Adeojo, who was driving and also died in the crash, and a John Doe, the registered owner of the students’ vehicle, as defendants.

The lawsuits claim the collision and deaths were caused by negligence on the part of either, all or a combination of the defendants.

Justice Kerr is expected to return with a sentencing decision on Friday morning.

This item is reprinted with permission from Kamloops This Week, Kamloops British Columbia. See article HERE.