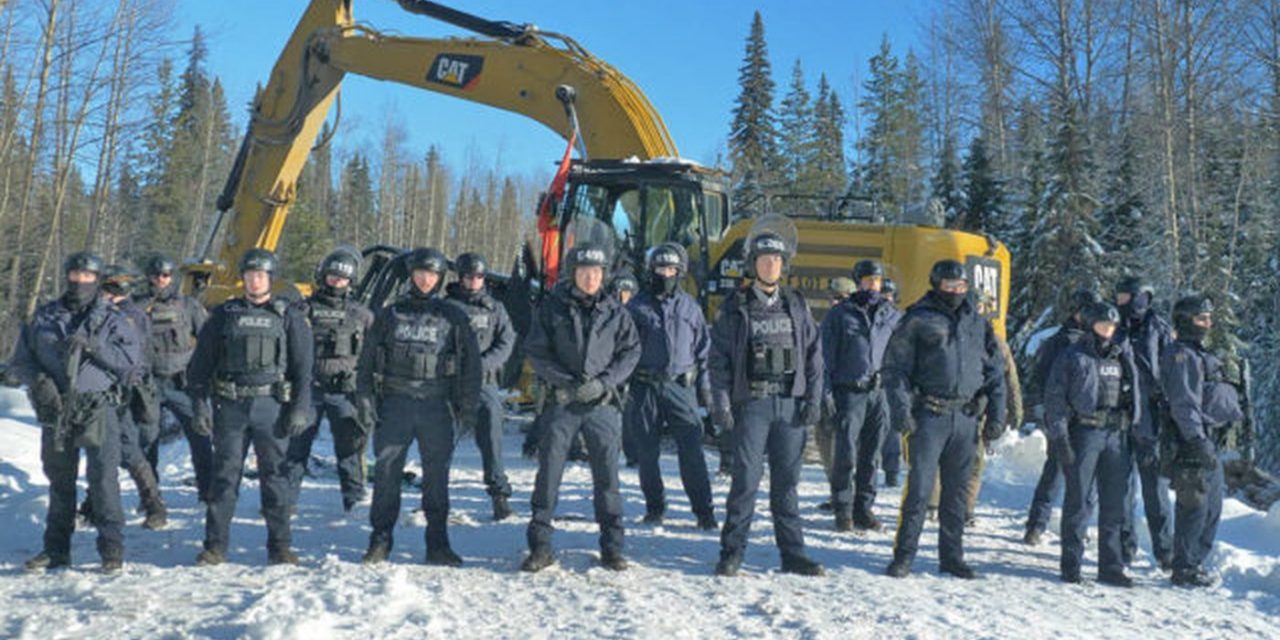 Protesters arrested onsite from Coastal GasLink’s (CGL) pipeline construction area in northwestern B.C., are now before B.C. Supreme Court in Prince George.  CGL is seeking to get those arrested to agree not to return to the site of construction activities.

As of Nov. 19, the RCMP arrested 29 protesters from the Gidimt’en Checkpoint, including their leader and spokesperson Sleydo’ (Molly Wickam) and three journalists.

With proceedings underway, those arrested are all facing charges of civil contempt for breaching the terms of a B.C. Supreme Court injunction granted to CGL in 2019.

Earlier today, Justice Marguerite Church released journalist Amber Bracken (arrested on Nov.19) after she agreed to respect the previous CGL injunction and respect the peace. Bracken who was on assignment for The Narwhal at the time of her arrest on Nov.19, will have to appear again in court in Feb. 2022, if charges by CGL are not dropped by then, The Narwhal confirmed in a tweet.

Independent documentary filmmaker, Michael Toledano, who was also arrested alongside Bracken on Nov. 19, was released under the same conditions.

In a statement released Monday by Gidimt’en Checkpoint, the protesters condemned the conditions of release demanded by CGL, citing it as “unreasonable” and “punitive.”

CGL is seeking a number of conditions of release, including denying many of those arrested access to a vast area of Wet’suwet’en territories, including the whole Morice West Forest Service Road and other areas accessed by this road, said the group.

“CGL is also asking Sleydo’ to provide documentation to prove she is Wet’suwet’en, and is seeking conditions that would bar her from returning to her home on Wet’suwet’en Yintah,” they added.

CGL has yet to respond to Black Press Media’s request for a comment.

Three journalists were arrested last week while covering the pipeline dispute– Bracken, Toledano and Melissa Cox. While Cox was released the same day she was arrested on Thursday (Nov.18), Bracken and Toledano were arrested on Friday (Nov.19) and were in police custody until they were produced in court this morning.

Bracken was on assignment for The Narwhal and Toledano has been working on a documentary on the pipeline protest since 2019.

CGL’s lawyer argued in court that Bracken did not identify herself as a member of the media. The Narwhal said in a tweet on Monday that its lawyer countered the claim by stating she had displayed her identification, arguing she is well-known by RCMP to be a journalist who has been working in the area.

Referring to Bracken and Toledano’s reason for arrest on Nov. 19, RCMP spokesperson Madonna Saunderson said that the individuals arrested later identified themselves as journalists, but not at the time of the arrest.

RCMP said that Bracken and Toledano were within the resistance camp, termed the ‘coyote camp’ by the protesters on Nov.19.

According to the RCMP statement, the arrests took place near the two kilometre mark of the Marten Forest Service Road, where the police discovered additional obstructions, blockades, two building-like structures as well as a wood pile that was on fire directly around a drilling site.

“After police determined there were individuals within the buildings, officers read the BC Supreme Court injunction and encouraged those inside numerous times to leave or face arrest. The individuals failed to comply and officers broke through the doors, entered the structures and arrests were made without incident,” said the RCMP in that statement.

RCMP have not provided an explanation as to why they were not released after they identified themselves at the later stage.

Two weeks ago, the protest near CGL’s pipeline site in Houston escalated after Gidimt’en Checkpoint served the company eviction notice from their traditional territory on Nov.14.

The RCMP were then called in to enforce court-ordered injunctions.

The arrests, prompted nationwide backlash and rallies across Canadian cities, with groups expressing solidarity with the Wet’suwet’en.

On Sunday, federal Public Safety Minister Marco Mendicino said on Twitter that journalists play a role that is fundamental for democracy and they “must be able to work free from threats, intimidation or arbitrary state action.”

“As the courts have held, it would be wrong for any journalist to be arrested and detained simply for doing their vital work on our behalf,” he wrote.

B.C. Public Safety Minister Mike Farnworth said Monday that a free press is critical to democracy and it was his hope that the situation would not escalate.

The province has been doing “a significant amount of work over the last number of months to try and de-escalate tensions in the area,” he told in a news conference.

“Journalists have a right to cover current events in this country. This right is essential to our democracy. They should not be held or detained any longer than is necessary to verify that they are journalist,” said Miller in a tweet Sunday (Nov.21).

-With files from The Canadian Press