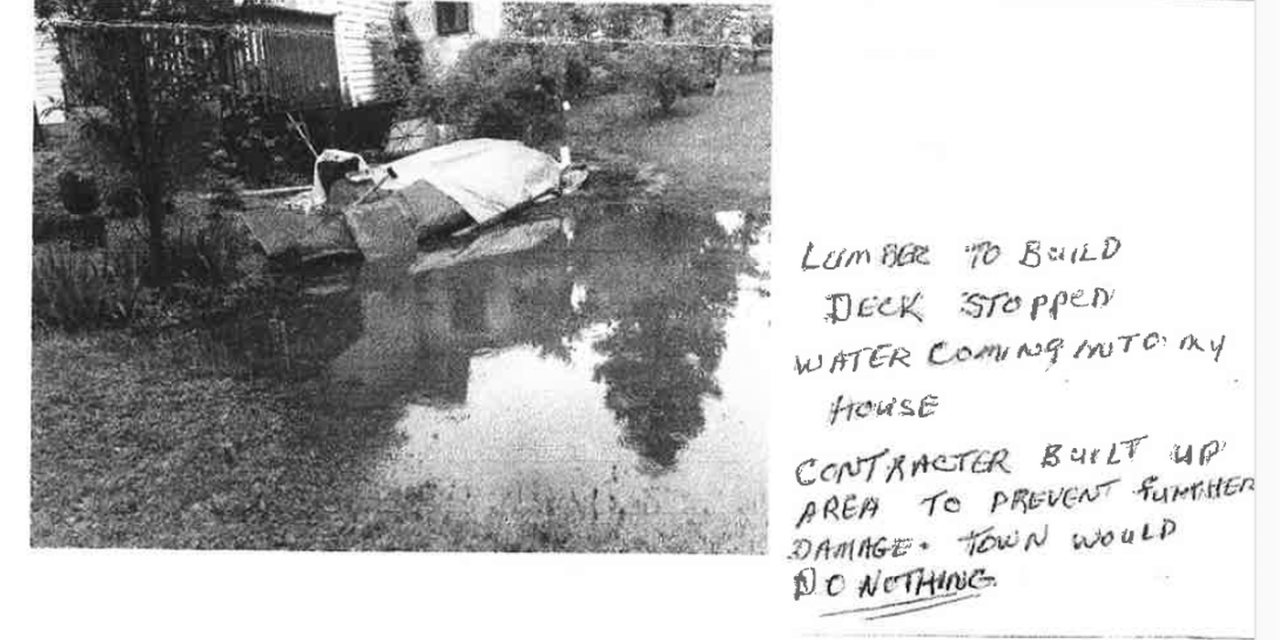 A resident of Bashaw asked town council to do something about the drainage problem she claims is caused by water rushing onto her property from a nearby school and street.

The delegation appeared at the Dec. 2 regular meeting of Bashaw town council held at the community centre.

Hazel Campbell Brooks spoke in person to councillors and began to describe the drainage problem her 54th Ave. property is experiencing by stating that she acquired her property in Dec., 2011 and found no existing problems with it.

However, come spring 2012 what appeared from under the melting snow was a pipe which apparently helped the 51st street sidewalk drain off.

Even at this point, Brooks stated, there were no real problems with drainage until 2016 which was when the new Bashaw school was finished.

Brooks stated water flows off the school roof and eventually ends up on her property.

Brooks claimed that the CAO told her that Brooks’ property was low land and was not that valuable to people anyway.

CAO Fuller spoke up at this point and told councillors she felt some of what Brooks was saying was opinion and not fact and that some of it was not relevant to the subject at hand.

Brooks continued by saying she had more meetings with the town in 2017 which never went anywhere and added that the town did offer to buy some of Brooks’ property but the offer was not high enough.

Brooks also noted the town’s offer included the requirement that Brooks pay all expenses of the transaction which Brooks stated made it an unacceptable deal.

The property owner told councillors she’s now 83 years old and water continues to run on her property which wrecks her plans and her garden.

“Now all I see is a mess,” said Brooks. “So much for the golden years.”

She also noted that there is no curbing on the east side of 51st Street, which faces her property.

Mayor Rob McDonald stated there are actually lots of blocks in Bashaw that don’t have curbing and Brooks responded curbing might improve the drainage problem on her property.

During discussion councillors asked Brooks what she would like the town to do to which Brooks responded the town could purchase and subdivide off the part of her property that suffers high water or do something to reroute the water so it doesn’t end up on her property.

After Brooks spoke to council, Shelley Boileau requested to speak to them about contractor work Brooks hired her to do in the summer of 2020. Boileau stated she’d been hired to build a wheelchair ramp for Brooks.

“The knowledge I am sharing is conversations I had with the town CAO Theresa Fuller with regards to the property flooding when we were starting renovations to build a wheelchair ramp,” stated a letter sent to council by Boileau. “The flooding waters were held back by our material which was wrapped in tarps.

“At that time I contacted the town CAO Theresa Fuller and requested that the town dump a load of oiled gravel on the property on the affected area by the home to stop the water from entering any closer.”

Boileau stated at the meeting the gravel was not supplied.

Fuller stated in her report to council that the property owner is responsible for placing the gravel, not the town. “…(I) checked into it and the town was unable to proceed with placing additional fill as it was on private property,” stated Fuller’s report to council.

After the delegations left councillors unanimously accepted the presentations as information.