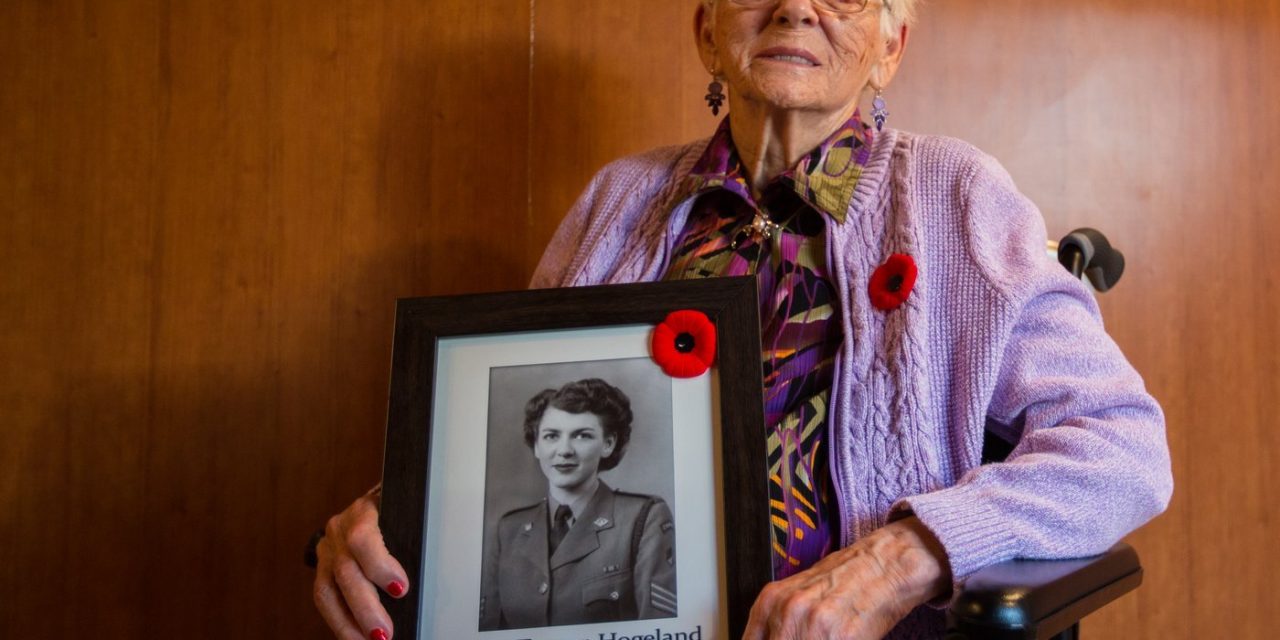 A special ceremony at the Dinsdale Personal Care Home today will spotlight Canadian Women’s Army Corps veteran Irene Hogeland, a  pioneer and one of the first women to serve in the Canadian Forces.

Hogeland  (nee. Turner) became a trailblazer during the Second World War after  she enlisted in the first-ever Canadian Women’s Army Corps (CWAC),  established in 1941.

Hogeland and her husband Mel served in the Second World War from the ages of 18 to 21.

It was an honour and a privilege, she said.

Hogeland  was born and raised on a farm northwest of Moose Jaw, Sask. She moved  to town at 16 after finding a job, located in the same building as an  army recruiting office.

Every day recruiters would stop her to ask when she would join the army.

Her  older brother had already joined the Air Force, another was in the  army, and her younger brother was waiting for his 18th birthday to  enlist.

Hogeland said she was inspired to join the Canadian Forces  out of a patriotic duty to her country, and she had her heart set on  the Air Force, partially because she loved the blue uniform.

“It was a constant worry for Mom and Dad,” Hogeland said.

The stress was exacerbated by poor communication and the monthslong waiting for letters to reach family members.

Hogeland  said her parents were proud their children had joined the Armed Forces —  a sentiment that was not always popular at the time. Some parents would  not allow their daughters to enlist because it was believed the army  was an unsuitable place for women.

Hogeland took her first train  trip to the military depot in Regina where she enlisted as a private  with the CWAC. From there she was sent to Vermillion, Alta., for four  weeks of basic training.

After completing  her training, Hogeland returned to Regina and waited to see where she  would be posted. She was eventually sent to the National Defense  Headquarters in Ottawa.

“It was exciting,” Hogeland said.

Her first assignment in Canada’s capital was serving as a runner in the headquarters of the Royal Canadian Army Service Corps.

Hogeland  soon received a promotion to the Department of Movement and Control;  the service was responsible for meeting soldiers returning from Europe  at ports in Montreal, Quebec City, Halifax and New York City. Hogeland  was charged with dispatching soldiers across the country to their  respective depots.

While posted in Ottawa, Hogeland was eventually promoted to sergeant.

One  of her proudest moments of service was being selected for the Honour  Guard at Canada’s National War Memorial, where French Gen. Charles de  Gaulle laid a wreath at the base of the monument.

“He was a tall  man, about six feet. We lined up going to the cenotaph and he walked in.  You had to look up to him,” Hogeland said. She added he took the time  to introduce himself to the Honour Guard through a translator.

It  was an amazing honour to participate in the event, she added, because  there were so many different people who could have been chosen.

Her  busiest time was at the end of the Second World War; troops returned  from overseas and Hogeland’s role in the Department of Movement and  Control was kicked into overdrive helping soldiers return home.

Once  the war ended authorities deemed women’s services no longer necessary.  Hogeland said she and many other women were disappointed by the decision  because they wanted to remain in the military.

Hogeland  received her discharge papers at that time and reluctantly returned to  Moose Jaw as the CWAC disbanded in September 1946.

Back in Moose  Jaw, Hogeland attended business college at the age of 21 and went on to  meet her husband — a veteran and Brandonite named Mel Hogeland.

He was later drafted by the Royal Canadian Artillery and  was sent to a camp for the 1st Battalion Rocky Mountain Rangers, known  as the Canadian Infantry Training Unit, in North Yorkshire.

After  three weeks of training, Mel was transferred to the 1st Battalion Black  Watch Royal Highland Regiment of Canada as a private.

He went on  to fight in France, eventually reaching the frontlines on the border of  the Netherlands and Belgium on Oct. 8, 1944, for the Battle of Scheldt —  a critical and bloody campaign fought by Canadian soldiers for the  liberation of the Netherlands.

Mel was wounded by German artillery  shrapnel on the right side of his face. He quickly covered his face  with field dressing and when it was safe, he was transported to hospital  in Antwerp, Belgium, for surgery on a compound fracture on his lower  jawbone and pharynx lacerations.

The Battle of Scheldt continued  for five more days and resulted in the eventual withdrawal of Canadian  troops. The battle came at a horrendous price; 66 men killed, 36 missing  and 91 wounded. Oct. 13 would become known as Black Friday for the  Canadian Infantry.

On Oct. 15, Mel’s mom received word her son had  been injured and it would not be until Oct. 31 she would receive a  letter from the 19-year-old detailing his injuries.

He would  eventually be discharged from hospital and in January 1945 was sent to  the Canadian Infantry Training Regiment in Aldershot. He was preparing  to return to active duty but was not mobilized to action by the time  victory in Europe was declared on May 8, 1945.

In March 1946, he arrived back in Canada and returned to Brandon the following May.

Hogeland  said they often wonder if he was one of the thousands of soldiers whose  paperwork she was responsible for through her job in Ottawa.

Mel  decided to head out across Canada looking for work, dying his green army  uniform brown and setting off on a motorcycle for the west coast.

He did not make it far though, and found work on the farm owned by Hogeland’s family.

Hogeland and Mel married in 1947. They had three daughters and celebrated 63 years of marriage before Mel’s death in 2010.

They rarely spoke of the war.

Upon  retirement from military service Hogeland connected with fellow women  soldiers during CWAC reunions in Brandon. She also attended reunions in  Winnipeg and Toronto.

While it was exciting to meet fellow CWAC  veterans, she said, it was also disappointing because there were very  few in the area even though thousands had joined the army in the Second  World War.

She enjoyed connecting with women who had a similar experience, even if they did not work together during the Second World War.

“We  never fought together but we all had the same memories,” Hogeland said.  “I never met any of them in the army, and there were hundreds of us. It  was so, so strange and disappointing.”

She wishes she could have  reconnected with some of the other women she served with during the  reunions but it was not to be — instead, she formed new friendships with  other women who had similar experiences.

She added in Brandon she connected with other veterans through the Royal Canadian Legion Branch #3.

Hogeland  was not able to become an official legion member initially because she  was a woman, forcing her to join the Ladies Auxiliary instead.

It’s  important to share stories of the war to ensure the knowledge is passed  down on to different generations. She takes pride in sharing her story  and hopes others will help honour veterans and the impact they have had  in the country.

Everyone can help preserve these memories so  people can better understand the impact women had on the military and  the role they had in the Second World War, she said.

It’s surreal  to be part of the Dinsdale Personal Care Home event, Hogeland said,  because for many years women were not typically included in Remembrance  Day ceremonies.

“Nov. 11 is a difficult day,” Hogeland said. “As I  get older, there are fewer Second World War veterans in the community  to honour and to share their stories.”