Businesses team up for community hub 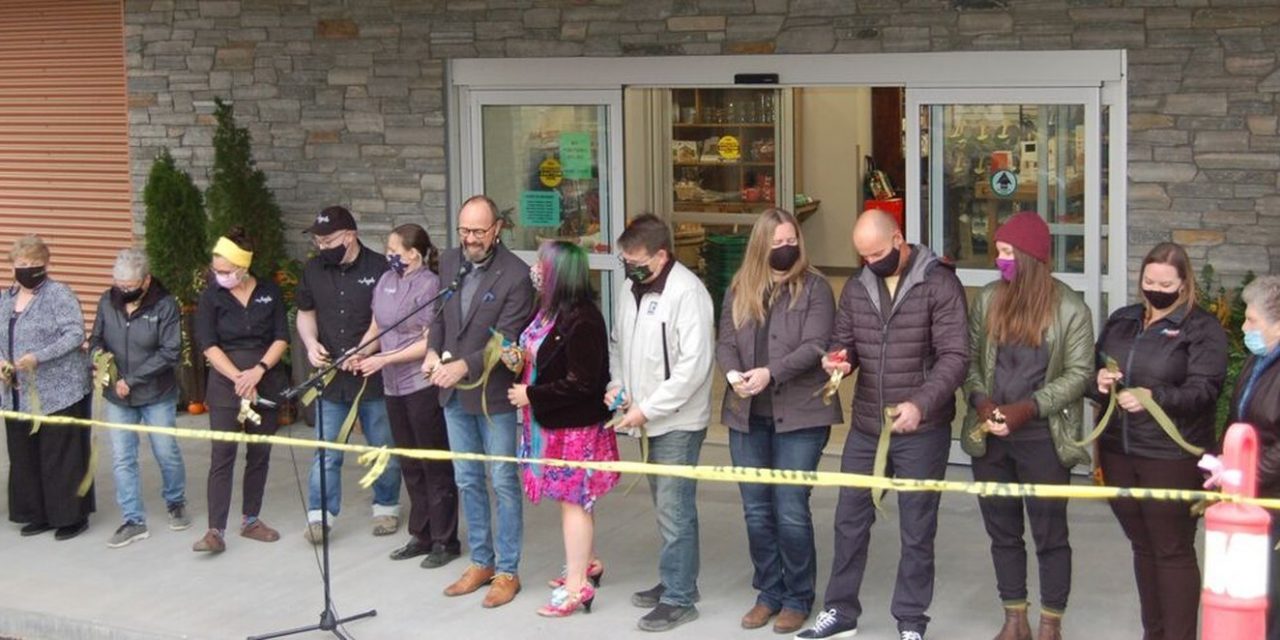 The Green Spot, Chez Angela and The BloomBox have joined forces to grow a community hub in Brandon’s East End.

The Green Spot celebrated its grand opening Saturday with an official  ribbon-cutting and a brief presentation marking the partnership between  The Green Spot, The BloomBox and Chez Angela Bakery and Café in the  newly renovated facility, said Green Spot owner Bernie Whetter.

During  the event, guests were able to explore the freshly renovated facility,  including the new Secret Garden Café by Chez Angela located near The  Green Spot’s new garden oasis.

“We’re pretty excited that we’ve  got to this stage,” Whetter said. “It’s taken a year of building, but  probably three or four years of planning.”

The effort between the  three businesses has brought an exciting energy to the Green Spot, he  said, and together the partners are helping fuel the facility’s success.

Whetter  first bought The Green Spot in 2007 and carried the idea of building a  community hub for the east end in the back of his mind. His vision  slowly came to life, surviving hiccups along the way, including the  flood that devastated the area.

Work on the renovation project began in 2018, with construction beginning in 2020.

The  partnership with The BloomBox and Chez Angela helped keep the spark of  the idea alive, Whetter said, explaining how they all motivated and  invigorated each other during the project’s development.

Whetter  hopes they have created a magical place for the community, especially  with a garden oasis located in the centre of the building that featured a  live jazz band during the grand opening.

“The place is magical at  nighttime. We can do things with lighting … It’s pretty nice,” Whetter  said. “We have a few fountains going. People love it.”

James  Chambers, co-owner and general manager of Chez Angela, said bringing the  Secret Garden Café to the east end of Brandon has been an exciting  experience.

The new café is unique from Chez Angela’s downtown  location because it carries a different menu with items crafted  especially for the Green Spot.

“We have some really great unique  menu items that we can do here that we’re not doing downtown — there’s  reasons to come down here,” Chambers said. “We wanted to do something  different.”

It is thrilling being able to serve customers in a  different context, and the restaurant has worked hard to ensure they set  up something distinctive at The Green Spot, Chambers said.

“We’re  not a franchise, so there’s no playbook we have to write everything  from scratch. Every day, we learn and our staff record the changes and  requests and ways we failed and ways that we did well with our  customers,” Chambers said. “We’re learning stuff every day.”

The  grand opening was an amazing experience, and the café saw more than 50  customers stop by in the first hour. He appreciated how friendly and  excited people were to see the doors open, while following COVID-19  public health measures.

Chambers added as a group of people who  are east end residents who have frequented the Green Spot for years, it  has been heartwarming being able to call the facility home and share the  space with the Green Spot and The BloomBox.

He praised Whetter  for helping make the new partnership a reality, adding he helped  energize everyone to ensure they overcame any barriers they encountered  along the way toward the grand opening.

“He gave us that lift  right at the end to get us over the finish line and we’re just so  thankful,” Chambers said. “We’re really excited to share this idea with  our customers. The idea of coming to have a latté and sit by a banana  tree and listen to the birds in the middle of winter is such a cool  thing … It is a really cool concept, and we’re happy to be a part of  it.”

BloomBox co-owner Shaun Fjeldsted said it was awesome to see years of careful preparation come to life during the grand opening.

Fjeldsted  said it has been five years of preparation to reach the finish line,  and it is exciting being able to share the vision of their community hub  with customers.

It has been an inspiring partnership, he said, and they are happy to be in the new location.

Fjeldsted  said The BloomBox appreciated the downtown location they called home  for 10 years, but it is an exciting energy partnering between the  like-minded entrepreneurs and friends who now call The Green Spot home.

The services offered by the shops complement each other, and it will be an exciting place for customers to come and explore.

He  thanked all the people in the background helping to ensure the grand  opening could happen and offered amazing insight to all the players who  were involved during the ribbon-cutting.

“It’s kind of amazing how many people it takes to make something like this happen and come together,” Fjeldsted said.

“It  has a sense of accomplishment. We’ve finally got to where we wanted to  be for the last five years … It’s definitely refreshed our business and  injected some new energy or us.”