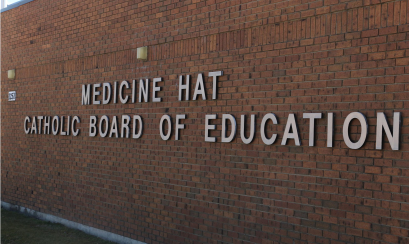 Medicine Hat’s Catholic Board of Education is taking steps to reduce its greenhouse gas emissions by partnering with Johnson Controls, an international corporation which specializes in building optimization, sustainability and safety, to update the infrastructure of schools.

When the project was first being considered by MHCBE bids were submitted by potential partners. Johnson Controls was chosen and began working within the school division in September 2020.

“What we were able to do is engage in a ton of different renovations within our schools, including LED lighting, boiler replacement, rooftop units (and) heating and cooling units within our jurisdiction,” MHCBE superintendent, Dwayne Zarichny, told the News.

“What this project did was allow us to take a lot of those (updates) that we would have done over a period of time and get those completed immediately,” said Greg MacPherson, secretary treasurer at MHCBE.

The updates not only reduce GHG emissions by an approximate 445 tCO2-e per year, but also improve the learning environment for staff and students and lower operation costs.

“We get to plow about $84,000 of utility savings directly back into the division and that’s on a yearly basis,” said MacPherson.

The total cost of the project was nearly $3 million. A capital maintenance and renewal grant covered $2.5 million. The remaining $500,000 was funded through the division’s infrastructure maintenance budget, MacPherson confirmed.

Zarichny and MacPherson believe the cost is worth it, especially since the partnership with Johnson Controls guarantees long-term returns equal to or more than the initial expenditure.

“(Johnson Controls) say, ‘You’re going to save X amount of energy every year,’” said Zarichny. “They audit that savings and if we’re meeting our target then after 15 years the project has essentially paid for itself – it hasn’t cost the jurisdiction anything. If we don’t meet those targets, then Johnson Controls will refund us the difference.”

“The board has a responsibility with respect to jurisdictional resources to use them as wisely as they can,” he said. “By engaging in this project we were able to get a tremendous amount of work done very quickly … We’re saving the jurisdiction money in the long run. This will be a benefit that the division continues to enjoy for decades to come.”

MHCBE is one of the first institutions in the province to take part in this form of project. Zarichny hopes their division can act as a leader in global GHG emission reduction.

“It’s a great thing for our students to see that, as a jurisdiction, we’re doing our part,” said Zarichny.