Changes on the landscape at the Whitecourt Airport 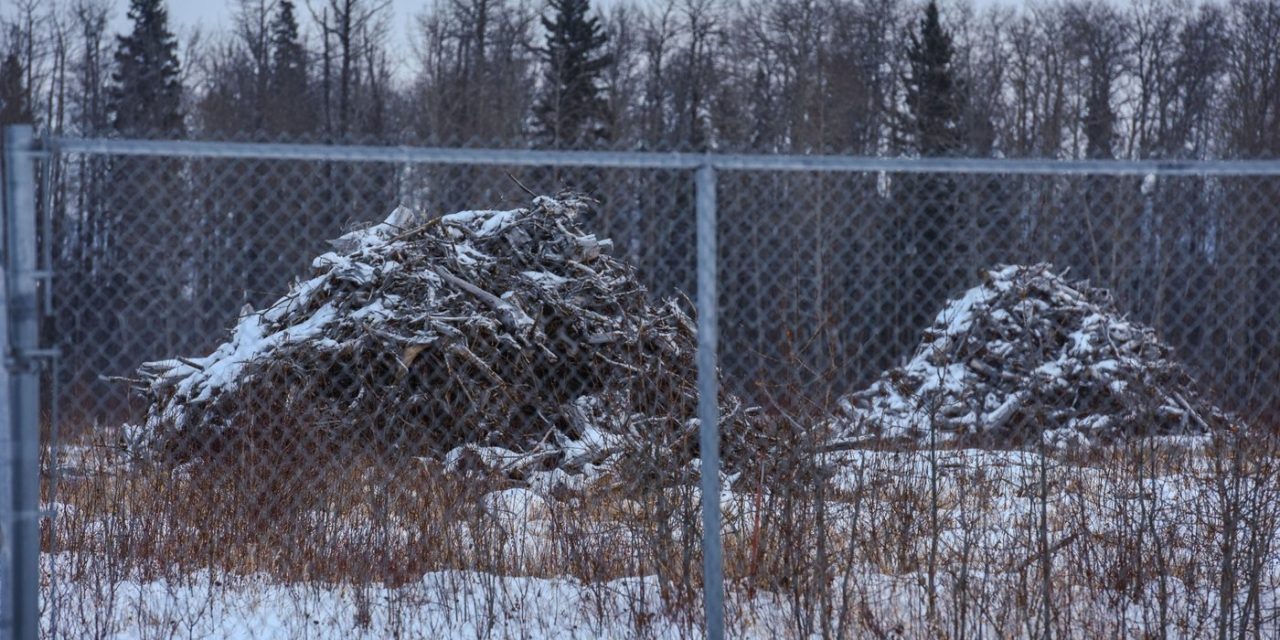 Due to a court order, Woodlands County must remove all the tree cover on the fenced-in airport lands. Passersby can visibly see large mounds of debris from the removal of those trees. To keep the tree cover from growing back, Administration proposed breaking the land down and seeding it to forage crop. Doing so has a cost, and Administration proposed an idea to help pay for it. During a recent Woodlands County Council meeting, Director of Infrastructure Andre Bachand explained that they wanted to log an area of Woodlands County forest outside the lands of the airport.

“The conservative estimate revenue is $100,000. To break the land, we are estimating $650/acre totalling roughly $85,000. To burn the existing piles, the stumps and slash piles, is in the area of $40,000. We are working on obtaining pricing on chipping and disposing of material so that it’s usable, but we won’t have those numbers until later. “

Councillor Alan Deane asked why it would cost $40,000 to burn the piles. “I believe you, but what’s captured in those costs?” Bachand explained that there needs to be equipment on-site during the burning process. “We need excavators to be able to move the material and keep re-piling it, and there are roughly 120 piles out there, so that’s a lot of piles to burn.” He then added that if they fail to break the land, the tree cover will regrow, and the cycle will continue of removing it. With a court order in place, they need to keep it from growing back.

Councillor Jeremy Wilhelm asked how they came up with the estimate of $100,000 for revenue from logging the land. “We just mean that if we log it, those lands will get roughly $100,000 revenue given the price of lumber. It’s probably more than that, but we are trying to be conservative with that number. When we tender it out, we ask for pricing per tonne for the different types of trees. The highest number gets the job,” answered Bachand.

Mayor John Burrows asked if any conversations had been had with the Whitecourt Trailblazers about their trail system being impacted by the clearing taking place outside the airport fence area. Bachand said they had not spoken with them and said he wasn’t sure if there were trails within the area being cleared. Mayor Burrows said there were.

Councillor Deane agreed. “Yes, they do, as the Mayor pointed out. For the most part, the existing trail is right adjacent to, I would call it, the North Boundary fence and then wraps around and goes by that lease. I don’t think there would be any concerns, but it would be good corporate citizenship to contact them.”

He then asked why the sections selected for logging were chosen. “When I look at the map, I see that there are other forested areas. Why this jagged map? I’m sure there’s a good reason, but I’m just curious,” said Councillor Deane. Bachand explained that much of it followed the property line but that some areas follow the crest of the ridge. “Although we are allowed to log the whole thing, we thought environmentally it would be best to stay away from that ridge a little bit.”

Councillor Wilhelm asked if the logging adjacent to the airport would impact wind protection for the airport area. “Will that have any negative impact?” Bachand said they had discussions with Nav Canada. “They’ve requested that we do some of that logging for the past number of years for sightlines. There may be additional wind or blowing snow hitting the runway, but we are able to deal with that.” Bachand said that within about five years, the regrowth from the logged area outside of the fence, near the runway, would grow back and give some relief from the wind.

“But they don’t think it will have a negative effect on the landing or taking off in the area,” queried Wilhelm. Bachand said they hadn’t discussed the impact on aircraft. Mayor Burrows, as a pilot, wasn’t too sure about not having done a consult on whether aircraft would be affected. “I would recommend that we have that conversation. We can either postpone this until we have that conversation, or we can vote it down. The amount of wind changes that have gone on there, if anyone drives on Highway 32, that is a polished piece of glass in the winter because of the deforestation along there. I don’t want to make our airport useless because we cut some trees down.”

Councillor Bruce Prestidge didn’t feel it would cause that much issue. “I don’t believe that cutting the trees will do much. The City of Edmonton has an airport, and there are no trees within miles of it. So, if we cut all the trees on one side, I don’t see cutting the trees down on the other side changing much.” Councillor Deane agreed. “If you go to Regina or Medicine Hat, those are very windy places, but that being said, I’ve never flown a plane, and I’ve never landed a plane, so I’m not coming from a position of experience.” Council voted to direct the Administration to tender the logging of the airport lands and budget for the revenue and expenditure in the 2022 operational budget.

This item is reprinted with permission from Whitecourt Press. See article HERE.