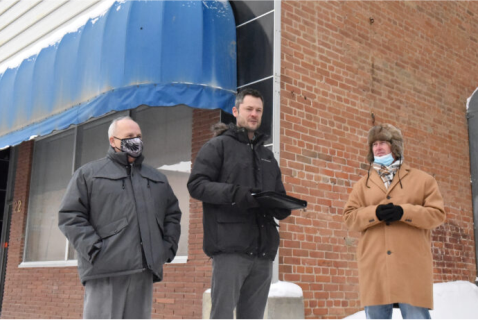 The face of homelessness has changed in Prince Albert, and now the City of Prince Albert and multiple community partners are looking to do something about it.

A few years ago, homeless residents could be found walking around the City during the day, but most found a place to sleep at night. Now, almost 30 people can be found sleeping in tents or boxes, and that’s prompted  the City and their partners to look into why that’s happening and what they can do to change it.

“There’s been significant changes in the dynamics of our homeless community in Prince Albert and some of the pressures that affect people,” said Dr. Chad Nilson of the Living Sky Centre for Social Inquiry.

Nilson has been hired as lead researcher to take a deeper look at the growing problem.

“Observational changes have been an acute spike in the number of individuals camping out in our streets. Five years ago it was about homeless individuals who were just walking around finding a place to be. Now we’re seeing individuals committed to ‘I’m camping in that corner tonight and I’m taking my wares with me’,” he said.

Homelessness has been part of the city landscape for years, but never used to be as obvious to the general public.

“We always had people but they were able to find a couch or the living room of a family or friend to sleep on,” Nilson explained. “That’s changed. We have an observation of what we call absolute homelessness where there are people actually camping out in tents, in shopping carts, in cardboard boxes on the streets.

“That is an image of homelessness but it goes much deeper. Our job is to find those deeper tracks and find out what leads to that.”

Finding solutions to a complex problem requires many people from many different areas of expertise. The City of Prince Albert decided to help create a group that is expected to deliver results, according to Mayor Greg Dionne, who has raised the issue at multiple council meetings.

“Homelessness is a complicated issue and it is certainly nothing we can solve in council chambers or within city hall as a single organization,” Dionne said while standing outside on a city sidewalk in -20 degree weather.

“To have an impact, we need to bring multiple partners together where we can have sensible, balanced dialogue around causes, consequences and solutions for our community.”

Dionne, city representatives, and members of some the key agencies outdoors to announce the new Homelessness Action Initiative on Dec. 16. One of the initiative’s goals is to mobilize the stakeholders so that each sector can provide it’s unique expertise and support.

Along with the City and Nilson’s Centre, social organizations, the justice sector and indigenous and provincial governments will be involved.

“Everybody has a role to play in this,” Nilson said. “The city is organizing the partnerships, the Community Advisory Board is about bringing in some of the main stakeholders in homelessness and my role is to bring in the research side of it.”

This will include looking at statistics, surveying not just the homeless population but also businesses.

In the last 10 years three studies have been completed on the issue in the City. Nilson has co-ordinated several point-in-time homeless counts with the latest in March of 2021.

That count found 71 people who are homeless but have access to shelter and another 26 who meet the criteria of absolute homelessness in that they have no place to sleep, not even an emergency shelter.

“The tipping point of the iceberg is when they are on the street but there’s a lot of stuff that has happened before they got there,” Nilson explained. “Part of this exercise is finding out those pathways to intercept that journey.”

Several hundred other people are estimated to be homeless but managing to ‘couch surf’ or find temporary accommodations nightly.
The causes of homelessness are myriad and diverse and so will be the solutions.

“Homelessness is not solved by simply popping up another couple shelters. We have to look at the impacts of homelessness,” Nilson said.

This can include needles left in public places from addicts, defecation on sidewalks from the lack of facilities, the ability of the community to feel safe and the image of the community.

“The conversation is really about chronic risk, that’s what we’re talking about,” Nilson said.

The growth in homeless is starting to be felt around the city, with businesses, families and service providers all feeling the additional strain.

From having a core group of homeless people that were in the city, the demographics have changed in the last three years.

“There is a lot of transients, a lot of urban migration that Prince Albert is the centre of. There are people that are coming and going all over the place and they come through Prince Albert, they’re here for a couple weeks and months and then they’re gone,” explained Nilson.

Social agencies have difficulty making headway with people who are not around long enough to develop a relationship with and can’t follow up with the visits they do have.

By early January, Nilson said they hope to have the right group together so they can start identifying problems and researching solutions.

By March, they should be able evaluate how well it is working and prioritize exactly which problems they will focus on first.