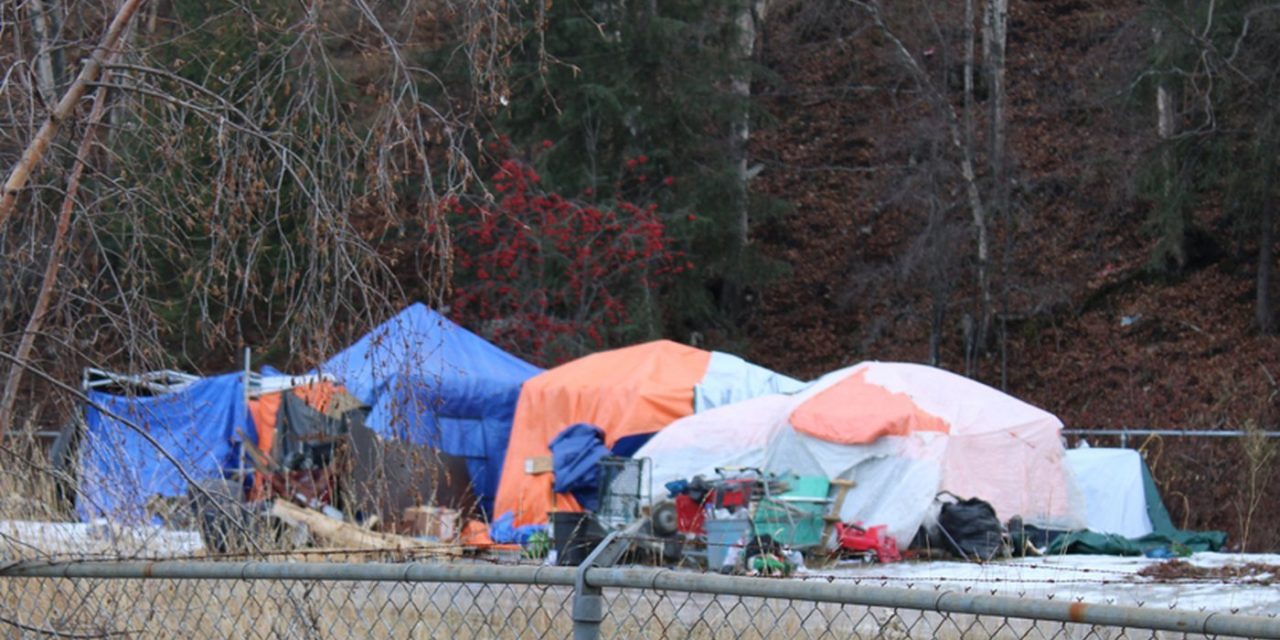 The City of Prince George is seeking a court order to evict the residents still living at the Moccasin Flats homeless camp.

If the order as proposed by the City is granted, the occupants would have until noon on Fri., Dec. 10 to remove all structures and belongings and to vacate the site at the end of Lower Patricia Boulevard.

After that, city workers would be allowed to move in and clean up what is left and RCMP would have authority to arrest anyone who remains at the site.

A petition seeking the order was filed at the the courthouse last week and the City is seeking to have a hearing on the application this coming Mon., Dec. 6.

In October, a judge turned down the City’s application to shut down the camp after finding there was a lack of alternate places for the occupants to go.

Since then most, but not all, of those who have been living at Moccasin Flats have been moved into supportive housing elsewhere in Prince George, according to officials.

But a few remain.

Affidavits in support of the City’s most-recent application include one from an analyst at the Prince George RCMP who tracks trends in crime to help police determine how to best deploy their resources.

A comparison of June to October 2021 and the same period the year before, when there was no camp, shows that the number of complaints to police about incidents within a 250-metre radius of the site rose by 115 files, or nearly 290 per cent, according to the affidavit.

The count also represented a 400-per-cent jump from the first five months of the year before the camp was established.

In other affidavits, Prince George RCMP members say the camp has been the scene of illicit drug use and overdoses, fights between occupants, attendance of “Johns” soliciting for prostitution, scattered chattel and apparent stolen property and construction material and uncontrolled burns.

Cst. Amritpal Dhadwal, who supervises the detachment’s downtown safety unit says two overtime members per day have been committed to patrolling the area three to five hours per day, on average. He says significant resources have been allocated to dealing with trouble related to the camp.

“This detracts members from pursuing other investigations or assisting in projects related to crime prevention, which focuses on community building and patrolling in other areas of the city,” Dhadwal says in his affidavit.

Officers also talk of a shooting on August 27 that left a woman with a wound to her right shoulder that required surgery and two significant fires within a week of each other in September.

As well, Prince George Fires Rescue’s chief fire prevention officer Steve Feeney says in an affidavit that on November 16 he attended the camp to distribute fire safety flyers and returned six days later to find no action taken on the advice.

Although smaller as of his visit on November 22, Feeney says the camp still contained merged communal structures covered with flammable tarps and with propane tanks and gasoline fuel containers inside.

“There were open fires burning inside shelter areas, including homemade wood stoves and an outdoor communal fire that was burning in close proximity to a tent. Two occupants were observed around the communal fire,” Feeney says.

He says the shelters have a “probability of being destroyed by fire” and pose a safety risk for both the occupants and the first responders. Occupants risk exposure to carbon monoxide poisoning if they are allowed to stay over the winter, Feeney also says.

City bylaw services manager Charlotte Peters says in an affidavit that as of November 22, there were five large structures, two small tents and one fifth-wheel RV at the site. No occupants were observed at the time.

On Monday afternoon, three people were seen putting up a large tent at the camp.