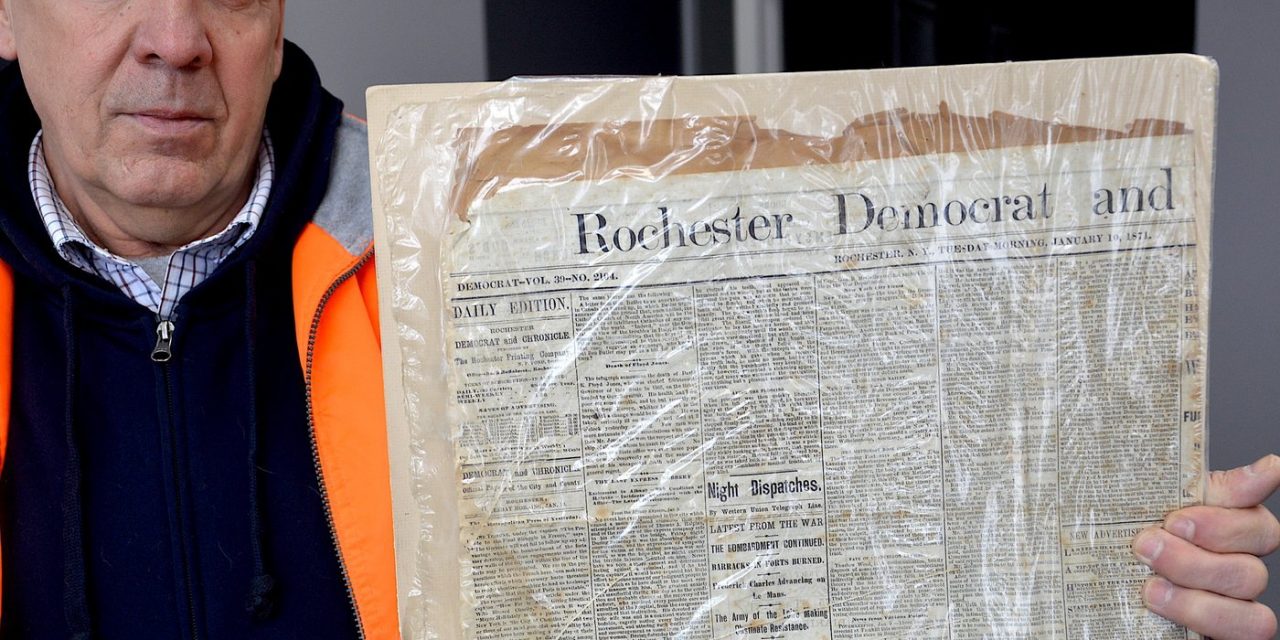 A Coronation man walked into a Calgary second hand store over 30 years ago, purchased some antique items that included a rare, 19th Century newspaper and has been wondering about the periodical ever since.

Ivan Garstad, whose name might be recognizable from his years as a professional bull rider, bought a well-preserved copy of the Rochester Democrat and Chronicle newspaper, specifically the Tuesday morning edition with a cover date of Jan. 10, 1871 from a pawn shop along with a valuable wooden bedroom suite and Singer sewing machine. But ever since he bought the newspaper he’s been wondering why it ended up in the shop and who preserved it so well.

Garstad brought the Rochester Democrat Chronicle by the ECA Review’s Stettler office Feb. 18 and noted that he bought it in about 1986 when he was in Calgary working on the Olympic venue construction project.

Garstad stated the newspaper, which has a cardboard backing and has a protective plastic cover, was sitting behind the Singer sewing machine he was interested in buying and the shop’s proprietor didn’t even know the newspaper was there.

The Rochester Democrat and Chronicle, located in Rochester, New York, still publishes under the same name, according to the newspaper’s website and the paper in Garstad’s possession was printed not long after two newspapers merged to create the Democrat Chronicle.

From it’s appearance he noted that it appears the newspaper was left sitting in its side and must have been exposed to water, as the bottom edge has some staining.

Someone took great care to preserve this newspaper he noted, and he’s done just as good a job as protecting it since. It’s still in virtually identical condition even more than 30 years later.

Garstad stated he did have it tacked up on a wall but decided to take it down and store it safely, including keeping it away from sunlight.

Even though the newspaper is in remarkable condition considering its age, it’s not entirely in mint condition as Garstad stated some of the pages appear to be much darker in colour than the front ones, and he’s never taken them out of the plastic or pulled them apart for fear of damaging them.

The front page has no photographs on it, and quite a number of news stories in a straightforward multi-column style. Over the years he’s said he’s read a few of the articles, including one about one of the last great train robberies.

Garstad was hoping somebody might have an explanation for why this 1871 newspaper from New York was so well preserved in Alberta.

“There’s got to be something in here,” he said, holding the newspaper. “Eighteen seventy one, that’s a long time ago.”

For perspective, Garstad’s newspaper was printed only a few years after Canada became a nation, Queen Victoria was still monarch of the United Kingdom, the famed Civil War general Ulysses S. Grant was president of the United States and the modern German nation was declared.

Any readers with information about the newspaper can email this writer at reporter@ecareview.com and the information will be forwarded to Garstad.