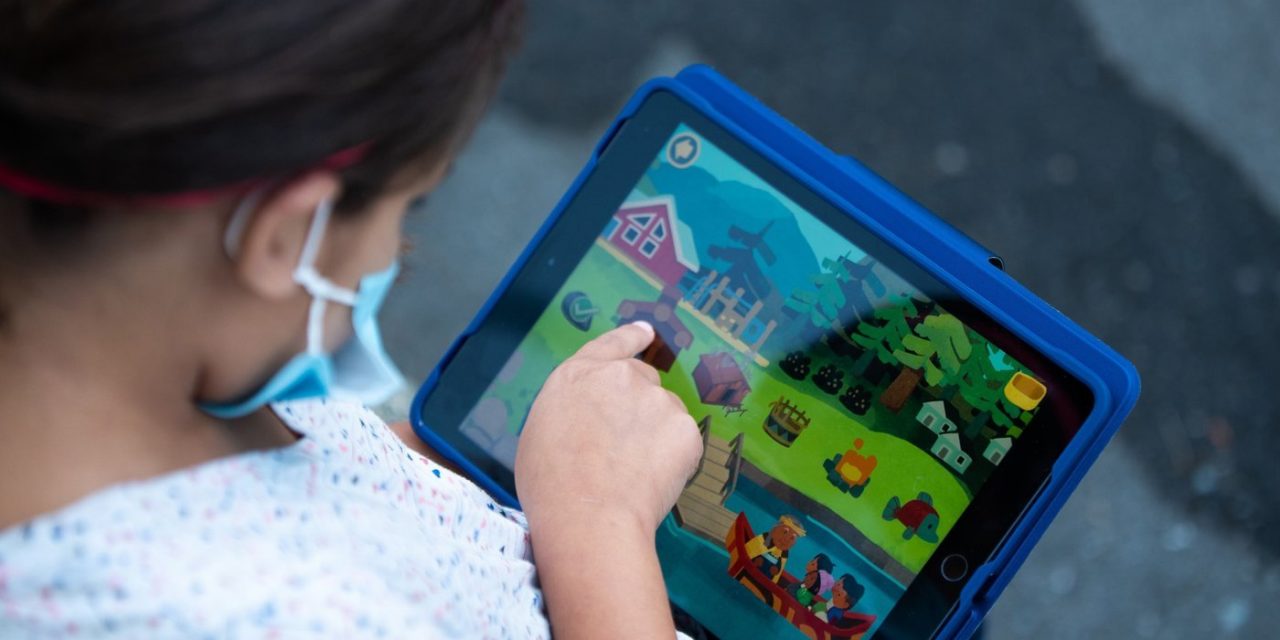 Nitinaht Lake, BC – Ditidaht First Nation has released a kid’s video game that takes players on a cultural journey by canoe through the nation’s traditional territory, off the coast of Vancouver Island.

The game was designed as a tool to prepare children aged 3 to 6 for attending kindergarten at Ditidaht Community School (DCS), where they begin taking diiʔdiiʔtidq language classes.

Through songs and traditional teachings voiced by community elders and speakers, children are provided with an opportunity to learn their traditional language “in a fun way,” said Tina Joseph, Ditidaht Kids research and production manager.

“It’s hard to believe that something like this was developed so tailored to our children in our language,” she said. “To see the representation of my own people is amazing … it helps kids identify with culture and feel like they’re a part of something.”

“[Smoking fish] was and still is a huge part of our culture,” she said. “It sustains us and nourishes us.”

Not only is gamification a “great way” to merge cultural roots with modern technology, Borland said it also makes language learning available to anyone living outside of the community who doesn’t have access to elders or knowledge keepers.

“Making that context available is a really important way of reconnecting folks who have become disconnected from their community with the language revitalization opportunities that exist,” she said.

Since its release on September 23, there have been over 350 downloads of the game, which is available for free through the Apple Store app, and will soon be available through the Google Play app store.

Debbie Jeffrey, who voiced one of the game’s characters, was first introduced to her language through her grandparents as a young child.

By modernizing the tools used to teach language, the semi-fluent speaker said it will have a wider reach among the nation’s younger population.

Jeffrey said previous attempts to teach language to her 8-year-old weren’t as effective as the video game.

“Now that she has the app downloaded, she’s hooked,” said Jeffrey. “It’s important to keep our language and culture alive … utilizing technology is definitely beneficial as this is where our kids are going today.”

In 2002, Jeffrey started taking language classes at DCS when she was 23 years old. At the time, she said the nation had around 10 fluent speakers.

By continuing to speak her traditional language, Jeffrey said she’s preserving her elders’ teachings and making them accessible others.

Like many other nations along the coast, diiʔdiiʔtidq language revitalization is challenging because there aren’t many fluent speakers left, said Ditidaht Kids Project Coordinator Dave Mason.

“The normal means of [revitalizing language] is to sit on your grandparents’ knee and listen to them,” he said. “But that’s no longer possible because there are so few speakers left.”

Developing an adventure game that would allow kids to become acquainted with their language was one solution, said Mason.

“The ability to identify and meet [their] needs without external interference is an important part of reconciliation in our country,” she said. “To give folks the power to determine what, why, how, when, and where language revitalization will happen for them in their communities.”

The other piece, Borland said, is providing nations with data sovereignty.

“Having these games developed in-house by teams that are from the community allows the community to control where that data ultimately ends up,” she said.

Looking back on the two-year project, Jeffrey said it has been an “honour.”

“Our culture is stored in language and our work to save our language is gaining momentum,” she said. “This game is a part of that work.”