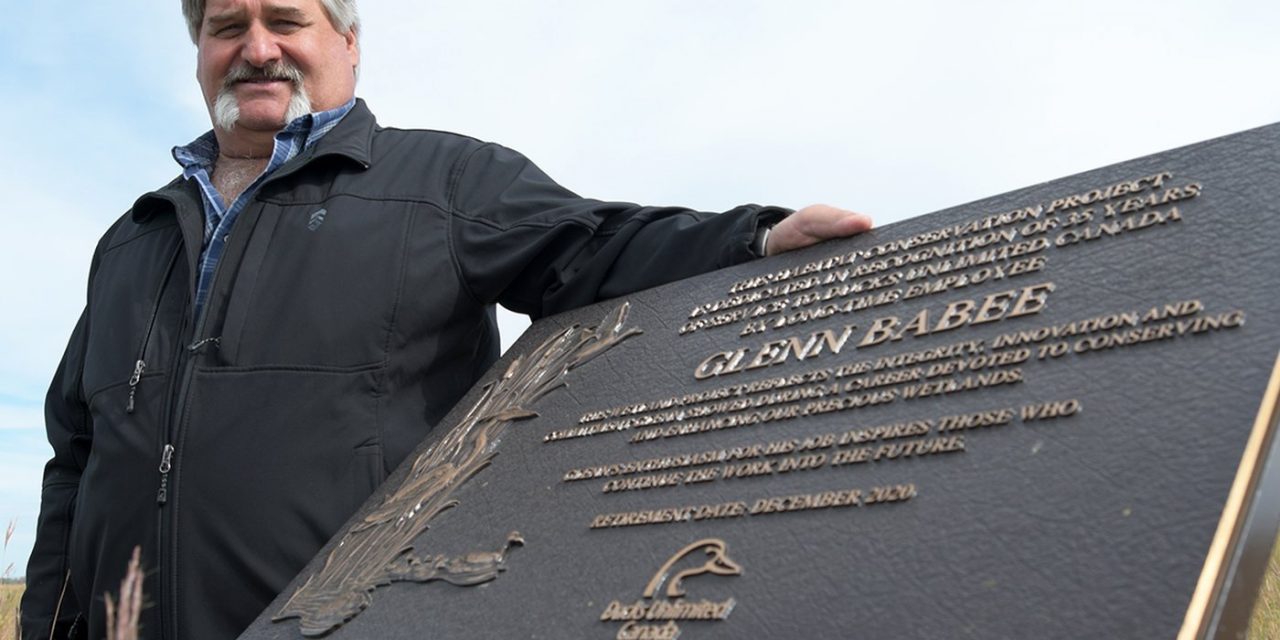 Honouring the retirement of a devoted conservationist, Ducks Unlimited Canada has dedicated 160 acres of marsh and prairie grasses  near Riding Mountain National Park to Glenn Babee.

A plaque honouring Babee was unveiled at the site in September to commemorate his retirement from Ducks Unlimited.

“A  lot of people just think that the habitat that we’re creating is just  for ducks. But, it’s not. There are all kinds of other wildlife using  it: white-tailed deer, some locations have moose in there, and  songbirds,” Babee said. “It’s more than ducks. You don’t realize until  your walking the property and you see what is actually using the  [area].”

The commemorative plaque on the land near Riding Mountain  reads: “This wetland project reflects the integrity, innovation and  commitment Glenn showed during a career devoted to conserving and  enhancing our precious wetlands.”

During his time with the  non-profit, Babee worked on conservation projects across the province  for 36 years. He briefly retired in 2020 before re-joining the Ducks  team for seven months to help cover a maternity leave at the office.

“I wanted to help the guys out,” Babee said.

He fully retired from the non-profit in mid-October.

Babee  played a pivotal role in helping to restore the land near Riding  Mountain National Park in the 1990s. He managed a quarter-section of  land southwest of the Park that Ducks Unlimited obtained through a  dispersal sale.

The area had been drained and over-farmed. But  through hard work and dedication, Babee cultivated 120 acres of prairie  grasses and restored 40 acres of wetlands.

At the time of the  wetland restoration, Babee said, he knew that although the area had been  drained and farmed actively, the habitat could be restored.

“We  knew eventually that the water would come back, with the habitat being  native grass planted in there,” Babee said. “We knew we would see it  being a productive parcel of land.”

He added the area was one of  the first spaces the non-profit brought in different types of native  grass and employed sculpting with a marginal flood mix to lower contours  near the wetlands when they were flooded back.

When people visit the space now, he said, they can see a diverse number of native grasses growing in the area.

Babee  said he saw many potential areas for regrowth over his career; however,  restoring spaces drained for agriculture projects were not always a  feasible process to undertake.

This made the success found at the area near Riding Mountain all the more special.

Babee  said the favourite project of his career was carp exclusion at Delta  Marsh near Portage la Prairie. The project was in partnership with the  Manitoba government and saw Ducks Unlimited create dikes and screens to  prevent carp, an invasive species, from entering the Delta Marsh from  Lake Manitoba. When the carp entered the Delta Marsh, they disrupted  aquatic vegetation vital to waterfowl and marsh biodiversity.

He  said seeing the restoration at the Delta Marsh was a huge eye-opener,  adding it was incredible to see the native grasses and wildlife return.  It was a big project to undertake and he appreciated the results they  achieved.

Babee’s work with Ducks Unlimited was the culmination of a lifelong love affair with wildlife in Manitoba.

The  conservationist grew up on a farm near Dauphin, where he was always  fascinated by the fall migration of ducks and geese. Babee pursued this  passion working as a Ducks Unlimited summer student before joining the  non-profit full-time in 1985.

During his time with the  organization, Babee helped landowners conserve, restore and manage  wetlands and grasslands to benefit waterfowl, wildlife and people.

“I  enjoyed the variety of work,” Babee said. “When you’re in the field  every day, you see how much habitat is being lost. That always pushed me  to work even harder to save the natural landscape.”