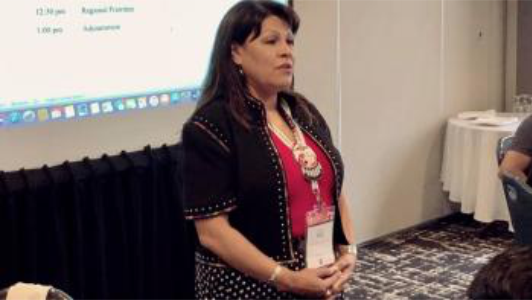 Alberta chiefs have supported a motion to remove Assembly of First Nations Regional Chief Marlene Poitras from the position.

A motion provided to Windspeaker.com last night indicates that 24 chiefs of 31 who voted supported the removal of Poitras, retroactive to July 1. Those numbers are unofficial.

There are 49 First Nations in Alberta. It is unclear how many attended the Treaty Chiefs of Alberta gathering, which began yesterday and concludes today.

On Nov. 30, chiefs passed an “extraordinary motion” to “immediately” change the meeting’s agenda to deal with Poitras.

An election for Alberta AFN regional chief was to be held by the end of June 2021. However, that election never took place. Poitras received her mandate in February 2018. She took over from regional chief Craig Makinaw, who stepped down early. She completed his term and then went on to serve her own three-year term. However, that mandate has since expired.

Despite that, neither an election for regional chief nor setting an election date was on the agenda for this week’s Assembly of Treaty Chiefs (AOTC) gathering, which had as its focus the reform of the AOTC.

The motion stated, in part, that “in the exercise of our inherent and Treaty rights to determine who speaks for us at a national and international level” that they declared the position of regional chief vacant as of July 1, 2021.

“The necessary notices will be sent to the national office with the appropriate authority to deal with outstanding issues,” said the motion.

“Finally the chiefs will determine who and when representations will be made at the national and international level on our behalf,” read the motion.

It concluded with the removal of Poitras effective July 1.

The motion was passed with 24 in favour, four opposed and three abstaining.

AOTC terms of reference include a vacancy clause which states if the office of regional chief becomes vacant then the duties are assigned to the six executive chiefs (grand chief and deputy grand chief from each treaty area).

However, with AOTC reform being the issue of the two-day gathering, it is unclear if this vacancy clause will hold.

The matter of Poitras’ role as regional chief has been ongoing litigation by the Confederacy of Treaty Six First Nations, which includes the Ermineskin First Nation.

In the latest court hearing on Nov. 18, Alberta Court of Queen’s Bench Associate Chief Justice Nielsen suggested that the parties “move forward” with an election.

The confederacy was also taking legal action at the same time against the Assembly of First Nations (AFN) Alberta Association, which was operationalized by Poitras and received funding from the national AFN to be distributed to the First Nations in Alberta.

With the motion to remove Poitras passed, it is unclear whether or how the litigation will continue.