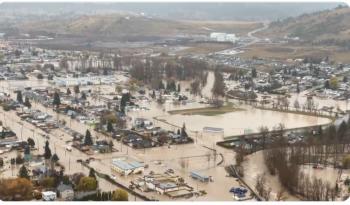 An extreme weather event in the form of record rainfall in a short period of time forced four First Nation bands near Merritt in British Columbia to evacuate today.

The Nooaitch IB passed a band council resolution to evacuate IR #10 stating concerns that the flooding Nicola River may put the main bridge at risk.

In a Facebook posting, Cook’s Ferry IB Chief Christine Minnabarriet said chief and council had declared a local state of emergency.  Evacuation orders were issued for IR#7, on the Nicola River, and IR#1, on the confluence of the Nicola and Thompson rivers, mainly because the Nicola River was impacting travel on Highway 8, the point of egress.  An evacuation alert was issued for all other Cook’s Ferry reserves.

Evacuees have been directed to register at MacArthur Island EOC in Kamloops or Kelowna Emergency Social Services. They can also register online.

An evacuation order was initially delivered for a portion of the city of Merritt earlier this morning, and shortly after the entire city was ordered to evacuate because the wastewater treatment plant had failed due to flooding.

The town of Princeton was also partially evacuated this morning when the Tulameen River breached the dykes. About 290 households were evacuated and 100 more are on alert.

An evacuation order was also issued by the Regional District of Okanagan-Similkameen for 34 properties as the Tulameen River continues to rise.

In the Fraser Valley, the city of Abbotsford declared a local state of emergency late Monday morning because of severe flooding in some areas.

The rain also caused mudslides in the early evening Sunday along Highway 7 between Agassiz and Hope stranding 275 motorists, estimated to be around 100 vehicles, overnight. Helicopters late this afternoon began rescuing people with about 70 still remaining on site as daylight hours waned. High winds hampered the rescue efforts.

There are also mudslides along the Coquihalla and the TransCanada (Highway 1), shutting off BC’s lower mainland from the southern interior.

More BC First Nations under evacuation orders due to flooding, wild fire

Evacuation orders have been issued for three more bands and another stands on evacuation alert in British Columbia.

There are now eight First Nations as of press time that have been severely impacted by an extreme weather event in the form of record rainfall in a short period and rivers overflowing their banks and breaking through dykes.

This afternoon, the Lytton First Nation was ordered to evacuate due to wildfire and flooding, and earlier today the Cowichan Tribes on Vancouver Island issued evacuation orders for portions of IR#1 and IR#9, while the City of Abbottsford issued an evacuation order for the Sumas First Nation in IR#6.

Early this afternoon the Lower Similkameen Indian Band issued an evacuation alert for IRs# 2, 7, 8, 9, and 10.

The City of Merritt in its entirety was evacuated yesterday as were portions of the town of Princeton and Regional District of Okanagan-Similkameen.

Today the City of Chilliwack declared a state of local emergency and issued an evacuation notice for the neighbourhood of Yarrow.

The rain also caused mudslides in the early evening Sunday along Highway 7 between Agassiz and Hope stranding 275 motorists, estimated to be about 100 vehicles, overnight. Helicopters worked into the evening Monday to safely airlift everyone.

Today work began to sift through the mudslide debris to look for vehicles or people. Officials say it has been difficult to know whether people are unaccounted for as motorists were also trapped by mudslides on other highways in southwestern BC.