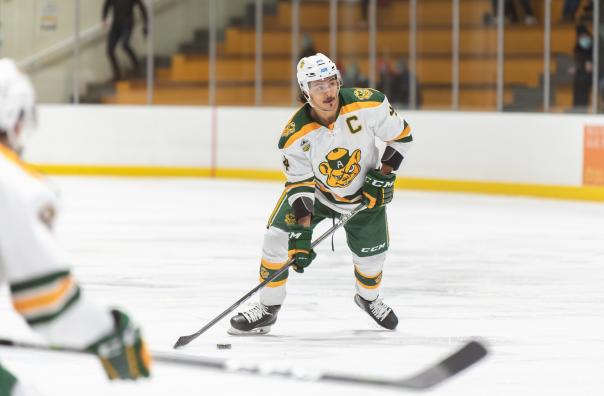 Clayton Kirichenko will be turning 26 at the end of February.

And then soon after that he can start focusing on a professional hockey career.

Kirichenko, a member of Sumas First Nation in British Columbia, has purposely put off trying to pursue a pro career to first obtain his university degree.

Kirichenko, a defenceman, has been wearing the C, signifying the team’s captaincy this season. The team’s coaching staff voted on his selection.

“I obviously felt a great deal of honour, especially with the great players who have served as the captain before,” Kirichenko said. “I think I’ve settled in as an older guy and definitely led by example.”

This marks Kirichenko’s fifth season with the Golden Bears. The pandemic, however, wiped out the team’s entire 2020-21 campaign.

As a result, since there was no season a year ago, Kirichenko would still technically be able to return for a fifth and final year of eligibility next season.

But since he plans to graduate this spring, he would prefer to give pro hockey a shot.

Had he chosen to go that route, Kirichenko said he could be playing in the pro ranks today.

“There is a little bit of interest now,” he said.

But Kirichenko said he has instructed his agent Shane Corston to inform would-be suitors that he plans to finish off his university degree before embarking on a pro career. Corston (not to be confused with former NHL player Shayne Corson) is based in B.C. and works for the Roy Sports Group agency.

The fact he decided to finish his schooling gave Kirichenko the opportunity to be the Golden Bears’ captain.

“It’s been a good experience,” he said, adding this is the first time in his university career that he has worn a letter for the squad. “There are a lot of guys who have been captain of their teams before. We have a lot of character guys.”

Kirichenko had last served as the captain of his club during the 2016-17 campaign when he was a member of the Medicine Hat Tigers in the Western Hockey League (WHL).

Kirichenko spent four years in the WHL. Besides the Tigers, he also toiled for the Saskatoon Blades and Vancouver Giants.

He then had some immediate success in the university ranks with the Golden Bears. During his rookie season Alberta not only won its Canada West league championship, but also the national university crown.

As for this year, Alberta is off to a 9-3 start, good for second place in its nine-team league. The Golden Bears are only behind the 10-2 University of British Columbia (UBC) Thunderbirds.
Kirichenko and his teammates, however, are the only team that has defeated the Thunderbirds in league action this season.

Alberta edged UBC 2-1 on Nov. 19 and then also eked out a 4-3 victory the following night.

Kirichenko said his club is indeed aiming to capture the Canada West title this season.

“I think that’s been my goal every year,” he said. “I think when we play our game, we can beat anyone on any given night.”

The Golden Bears are now on their holiday break. They are scheduled to resume their season on Jan. 7 with a home contest against the University of Calgary.

Kirichenko is the oldest player on the Golden Bears’ roster.

But one that has certainly been contributing, since Kirichenko has been averaging almost a point per outing.

He earned 11 points (two goals and nine assists) in the Golden Bears’ first 12 contests this season. And he was just a point behind a pair of other Alberta blueliners, Jared Freadrich and Dylan Plouffe, who had accumulated a dozen points each.

Earlier this month, Kirichenko was also selected to play in a pair of exhibition contests, featuring university players against members of the Canadian national junior squad, preparing for their world tournament.

Kirichenko and his teammates were defeated 3-0 and 7-2 in those outings by the junior club, which kicks off its world tourney on Dec. 26. This year’s tournament will be co-hosted by Edmonton and Red Deer.

“It was a great experience,” Kirichenko said of his participation in the two exhibition matches.

Kirichenko was born in Abbotsford, B.C. but his family moved to Sherwood Park in Alberta, a hamlet located about 15 kilometres east of Edmonton, when he was 12.

Kirichenko’s Indigenous ancestry is through his mother Sheilah. His father John has both Russian and Ukranian ancestry.