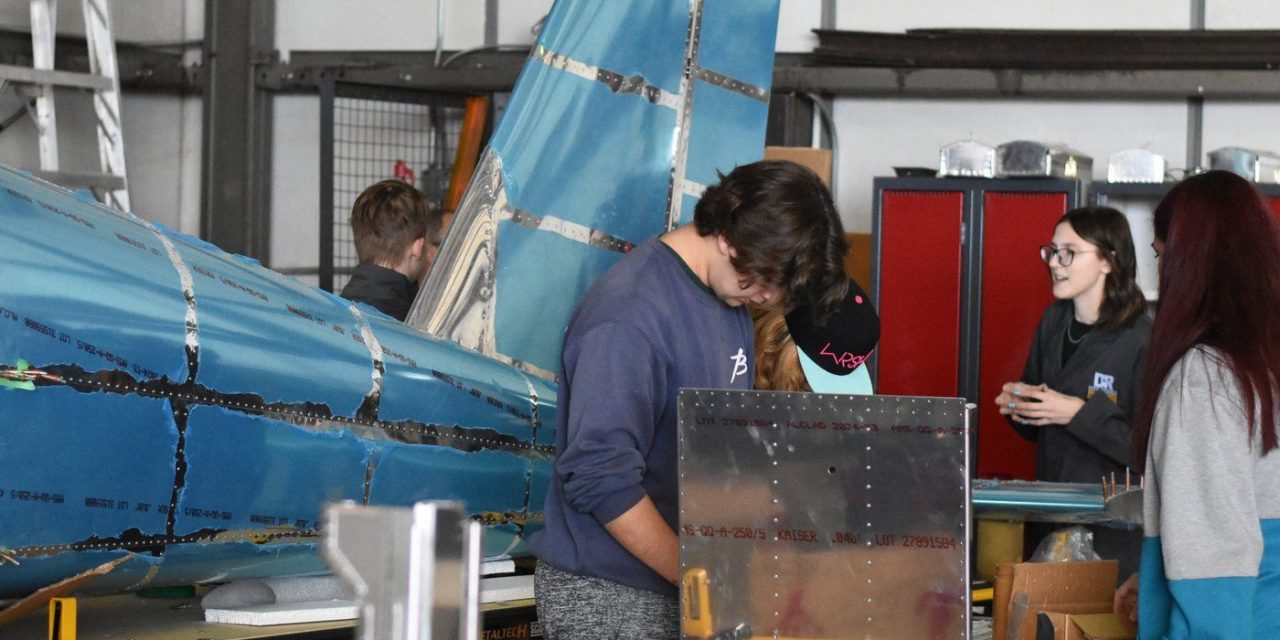 Students at the Dave Rozdeba South Alberta Flight Academy are hoping to take to the skies this summer as they near competition of a plane they have began constructing in 2020.

The academy, which is offered in partnership with Super T Aviation, provides students at Prairie Rose Public School’s Eagle Butte High School the opportunity to partake in a three-year aviation program, with the goal of earning their private pilot’s license. Students of the academy learn flight theory and aviation, among other topics.

“When we tried to marry the two worlds of aviation and flight, we needed to be able to do it under the current curriculum framework that exists in Alberta, so, in an effort to offer credits for what (students) are doing, it was decided we would build this airplane,” Jimi Ricci, co-ordinating teacher with SAFA, told the News. “By building this airplane (students) are employing sheet metal skills, mechanic skills, and blueprint reading skills (which) tie in a lot of the existing career and technology studies courses.”

Ricci’s goal is to complete the plane by the end of the current school year.

“Once this plane is complete, the plan is to make it available to our current students who have their license and alumni of the program,” he said. “We actually have a few components of a second aircraft, so the new students will be able to build that aircraft… while, this plane is being flown.

“Then, once the second airplane nears completion, we could start our sell-and-build cycle. The intention is to always sell these airplanes when they’re completed, buy a new kit and continue the process over and over again.”

Though there’s still a lot of work to do get the plane off the ground, Ricci is proud of his students and what they’ve accomplished so far within the program.

“They’re doing awesome. I’ve been looking at some of the work they’ve done recently and it really is incredible they have this opportunity (in) high school,” he said. “There’s a few schools which will build an airplane in their engineering classes; there’s a few schools which offer flight training, but there’s not a lot out there which will marry the two like the program we have here, so it really is unique.”

Students are also proud to see the airplane start to take shape.

“Every single day I look at it I remember all the hard work we put into it,” Reid Felesky, second-year flight academy student with no previous aviation experience, told the News.

“You see one thing on paper about how this works, but it’s a completely different world when you actually see a physical, mechanical piece of it. It’s a great opportunity and definitely knowledge I’ll take into an aviation career,” Felesky said.

Student Logan Neubauer has an avid interest in aviation and considerable experience with planes, having once been in the air cadets, but is also amazed watching the plane come together.

“To see it kind of, actually, look like an airplane in this space here is pretty surreal to see,” Neubauer told the News. “It took a while to get to this stage because of COVID (but) to be able to do it all throughout high school has been an incredibly unique experience… It’s been a tremendous program to be a part of.”

Neubauer explained the assembly process is quite tedious, however it has helped him learn more about aircraft mechanics.

“You have to be really thorough as it’s not something you want to (accept as) just being good enough,” Neubauer said. “We all take it pretty seriously because any one of us could be flying this one day.

“My favourite part about the aircraft construction comes down to better understanding of the inner workings of an airplane. We do a lot of theory of flight when were are learning about them, but it’s all theoretical. Whereas, this is really hands-on and practical… I think it helps us develop a better understanding of the aircraft in general and flight characteristics”

Since the academy opened in 2019, it has already seen the graduation of four students, with several others set to graduate in the spring. The sky’s the limit for students of the academy, many of whom plan on going into careers within the field of aviation.

Anyone interested in the program is invited to attend an academy open house being held on March 24 at 7 p.m. at the Super T Aviation hanger at 11 Airport Drive.

“We’re just sharing the program,” said Ricci. “Letting people know what we’re doing and hopefully capturing the interest of some prospective students for next year.”