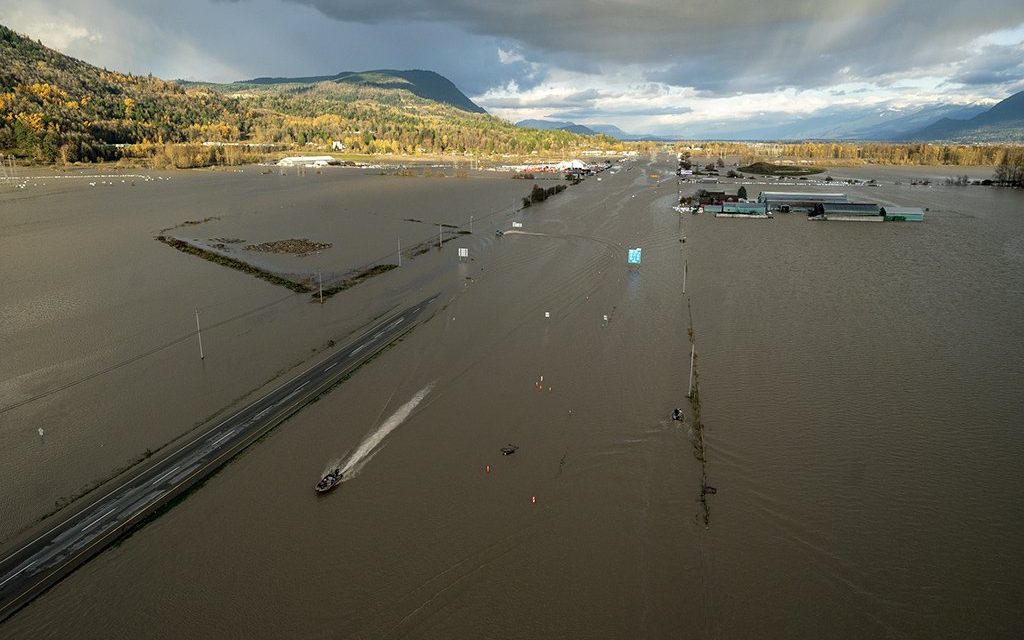 As floodwaters rose in Abbotsford Tuesday, 18-year-old Dylan Putz’s way to cancer treatment in Vancouver seemed to wash away along with  swaths of Highway 1.

The avid mountain biker and  trainee electrician was diagnosed with rhabdomyosarcoma, a rare and  aggressive cancer in September 2020. He has been making the nearly  two-hour car trip from east Chilliwack to BC Children’s Hospital in  Vancouver at least once a week for more than a year.

But when the highway washed out in floods  and mudslides near Abbotsford and Hope, cutting off Chilliwack and Hope  from the rest of the province, his appointment to place a stomach drain  on Thursday and plans to begin a new round of chemotherapy were  jeopardized.

“You don’t want to put things off…  especially when having cancer treatment, any delay feels scary,” said  Dylan’s mom, Carmen Putz in an interview on Thursday as Dylan recovered  in hospital.

Dylan and his father, Brian  Putz, were able to get on a helicopter chartered by Brian’s employer  over the floods to Abbotsford, where the construction company also  arranged a truck for them to drive into Vancouver.

While he made it, the  younger Putz is one of likely hundreds of patients in Chilliwack and  Hope areas who are scrambling to find a way to essential health care  only accessible in Abbotsford and Vancouver amid record flooding,  evacuations and closures of highways 1 and 7.

According to the most recent data available, in 2012 more than 720 people in Chilliwack and Hope are diagnosed with cancer each year, a number which has likely increased as better screening practices increase cancer diagnosis rates across B.C.

Dozens of comments from Fraser Valley  residents on a Chilliwack Facebook group describe cancer and dialysis  patients being stranded in Abbotsford away from home and their regular  medications, or stuck behind the floodline without a plan to reach  timely care for a variety of chronic and urgent conditions.

Fraser Health has been arranging flights  for patients between Chilliwack and Abbotsford, Carmen said, but many  Fraser Valley residents being treated in Vancouver are not even on their  radar. (Cancer care is co-ordinated by the Provincial Health Services  Authority and the vast majority of it is delivered in Vancouver.)

Neither she nor Gabrielle Kristzl Toth were  contacted about getting to Vancouver for care, despite private charters  leaving from Chilliwack airport for patients cared for under the Fraser  Health authority.

“We’re basically with Vancouver Coastal Health, so Fraser Health doesn’t even know about us,” said Toth in an interview.

Toth’s husband Chuck Toth was diagnosed  with pancreatic cancer in August and is slated for surgery to remove the  cancer on Monday.

But she doesn’t know how they will get  there and is preparing to show up along the recently opened Highway 7  lane for commercial and essential vehicles to argue their way through.

Chuck’s surgery has already been delayed  once due to pandemic-related staffing shortages at Vancouver General  Hospital, said Toth, “and this is a cancer patient, so time is of the  essence.”

The stress is compounded by having to sort  out care for the couple’s two dogs and pay for a hotel in Vancouver for a  longer period because she can’t go back and forth.

“It’s scramble time,” said Toth. “You’re  already under such extreme stress when somebody in the family has  cancer. So this is just really not easy to deal with.”

The flooding has also disrupted a number of  patients who travel from Chilliwack to Abbotsford for dialysis and  other cancer care.

Fraser Health confirmed it  is co-ordinating some emergency transportation for patients trapped by  highway closures between Chilliwack and Abbotsford.

“Fraser Health has been in contact with all  affected dialysis patients and is assisting a small number of  Chilliwack residents who require access to dialysis services at the  Abbotsford Community Dialysis Unit or Abbotsford Regional Hospital,”  said a spokesperson in a followup email.

“We are co-ordinating air transportation and accommodations, if necessary, for these individuals.”

The Provincial Health Services Authority  said about 70 patient appointments at BC Cancer Abbotsford have been  cancelled or delayed due to the floods in the last three days, but the  vast majority of its more than 400 daily appointments have continued.

The health authority is prioritizing urgent  care and said cancer patients are considered essential travellers for  access to the single lane of Highway 7 that recently reopened.

“Where needed, BC Cancer is exploring all  transport options for our patients, taking it on a case-by-case basis,  as our priority is to ensure patients have access to the timely care  they need,” wrote a spokesperson to The Tyee.

The Ministry of Health said in a statement  that cancer-care facilities in Abbotsford and Vancouver have not been  affected by the flooding but that patients without transportation to  their appointments should reach out to their cancer centre for help  arranging transport and accommodations.

For Toth, it underscores the need to invest  in specialized health services in Chilliwack itself, and not just rely  on people travelling to Vancouver for essential care.

She and Charles moved to Chilliwack from  Surrey near the beginning of the pandemic after he retired from being a  bus driver in Vancouver but have commuted to Vancouver for all his tests  and screenings because wait times in Chilliwack for a simple CT scan  were up to six weeks.

Toth hopes this is a wake-up call for further investments in specialized care in Chilliwack and Hope.

“The real specialists are in Vancouver,”  she said. “So when your access is cut off from that hub, you’re  basically at their mercy.”

This item is reprinted with permission from The Tyee. See article HERE.