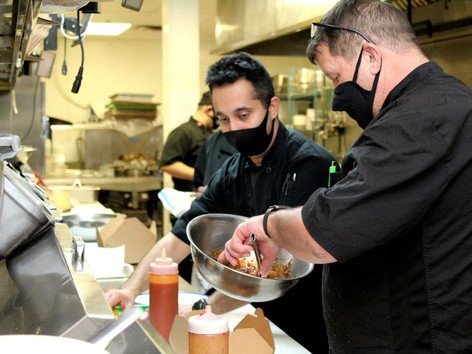 The move is a response to a September report that concluded thousands of new jobs could open in the region during the next four years. But for now, one-third of local businesses are having trouble filling job vacancies, particularly construction and restaurant jobs.

Dianne de Sousa, executive director of the chamber, said the committee will recommend policies that will help attract and retain staff, such as competitive salaries and work environments. Employers will be supported with information sessions and workshops on adapting to the economy.

“The post-pandemic impact is multifaceted,” said de Sousa in an interview. “One of the things that has come out of this pandemic that we’re seeing is the mental health challenges, the need for child care, flexible child care and the desire for flexible work schedules.”

The survey from Fort McMurray Wood Buffalo Economic Development and Tourism (FMWBEDT) concluded local job growth will continue until 2025. The researchers included post-pandemic recovery into their findings, but acknowledged political, economic and social factors impacting the region during the next few years are unpredictable.

These problems have been reported across Canada, outlasting the Canadian Emergency Response Benefit (CERB) and Canada Recovery Benefit (CRB). The Bank of Canada reports 64 per cent of the nation’s businesses can’t find enough workers. Nearly one-in-five workers are considering quitting their jobs within the next year. These problems have also been documented in the United States.

De Sousa said much of the feedback will come from employers, but workers will be consulted for perspectives on issues such as talent attraction and work opportunities.

“Hopefully, through what we say to the employers, they will then talk to their current employees,” she said. “There is significant turnover in some instances.”

“One of the big things is operator training. We are really trying to build that up. Class 1 and Class 3 driver training is a demand in the community and across the province, and it’s actually across the country,” she said in an interview. “The other thing is early learning childcare. They’ve increased their numbers substantially this year for the demand in early learning child care.”

Some workers who left these industries with high job vacancies have returned to school or moved into another industry. Others weren’t happy with the industry itself.

Fort McMurray resident Courtney Kern spent 17 years in restaurants, working as everything from hostess to manager. She knows the sector is desperate for workers, but she has vowed to never return. Basic benefits were non-existent at many places, as was paid time off. There was little overtime pay, but lots of pressure to work on her days off.

“You say no, all of a sudden that is being held against you because you didn’t come in and help out,” said Kern. “You don’t get recognized by your management. You’re constantly being mistreated.”

Gil McGowan, president of the Alberta Labour Federation, argued there is no labour shortage in these industries, particularly among restaurants. He argued problems finding and keeping  staff could be solved with improved wages.

“For the most part, wages have not budged since the beginning of the pandemic,” he said. “Employers can’t legitimately say they’re facing a labour shortage when they haven’t responded to market signals.”

The committee will meet monthly to review priorities and mandates.