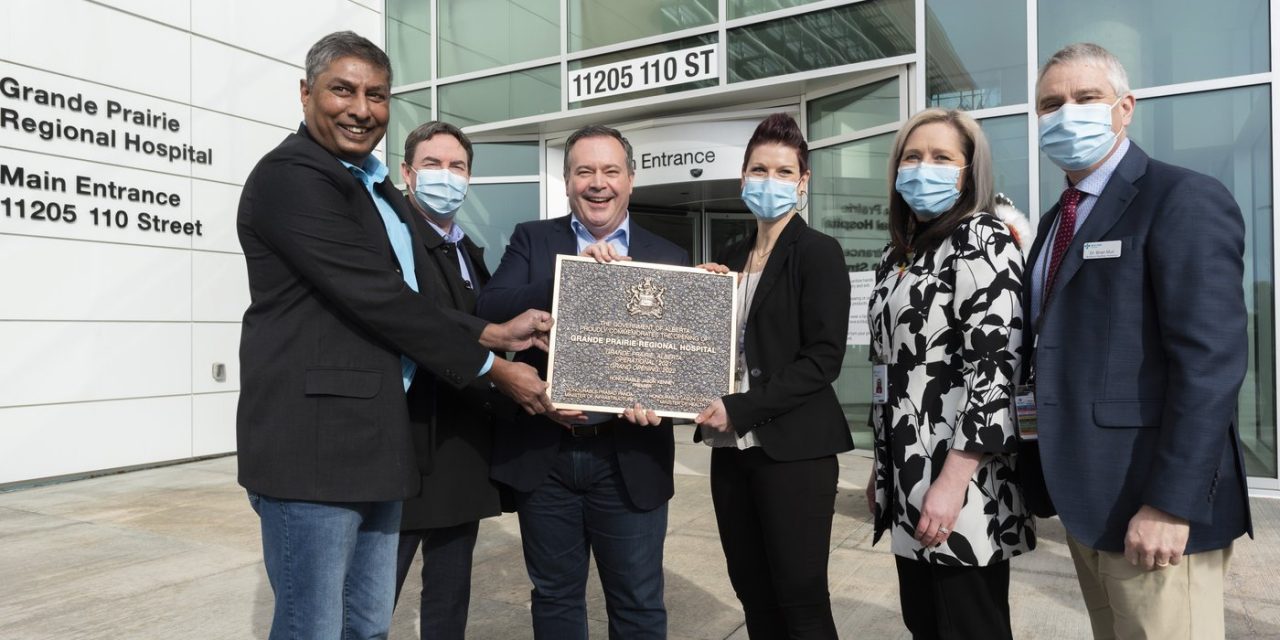 Grande Prairie Regional Hospital (GPRH) has been serving the community since Dec. 4, and Saturday marked the official opening with Premier Jason Kenney and local leaders in attendance.

“Congratulations to Grande Prairie and the dedicated healthcare workers on this state-of-the-art facility that will serve northern Alberta far into the future,” said Kenney.

The province says the facility cost $870 million – $20 million more than reported in December.

The GPRH has two radiation vaults dedicated to cancer care, a first for the North zone. Previously cancer patients would travel to Edmonton for treatment.

The new hospital has 11 operating rooms and units specialized in youth and pediatric mental health.

Staffing of the new hospital has been a concern of many residents in the area.

On Saturday, Kenney said the province has made special incentives for nurses and physicians for rural recruitment and retention.

Last Wednesday (Feb. 23), the Beaverlodge hospital was without a physician for 24 hours; the Sexsmith Medical Clinic was closed due to no physician most of February.

Still, Kenney said more physicians and nurses work in the province than ever before.

“There has always been a challenge in smaller rural communities at recruitment and retention,” said Kenney.

“We are offering better pay than any other province to doctors, stronger rural incentives, lower taxes and a great quality of living.”

He explained that immigration was a big part of bringing doctors into the province. The pandemic has made that difficult due to international travel restrictions.

“When international travel returns, you’re going to see hundreds of thousands of selected immigrants moving to Canada, and a lot of them will be doctors,” said Kenney.

The hospital was long-awaited by area residents after the original opening for 2014 was delayed due to ongoing construction issues.

Kenney said many mistakes led to the 10-year construction timeline.

The main one, he said, was not locking down the plan so it was subject to constant changes. The premier added that due to the complexity of hospital design, every change led to more delays.

Moving forward with other hospital projects, the province will set down a definitive plan it will not deviate from to ensure timelines are met, said Kenney.

The new hospital in Grande Prairie has been a busy one: 316 babies and 1,154 surgeries have been recorded there since it opened in December.

QEII remains open for ambulatory healthcare services, including dialysis, community-based rehabilitation services and Mackenzie Place continuing care. The province and AHS said they are looking at other opportunities for the former hospital.

This item is reprinted with permission from Town & Country News, Grande Prairie, Alberta.