Local artist creating ornaments and smiles out of duck eggs 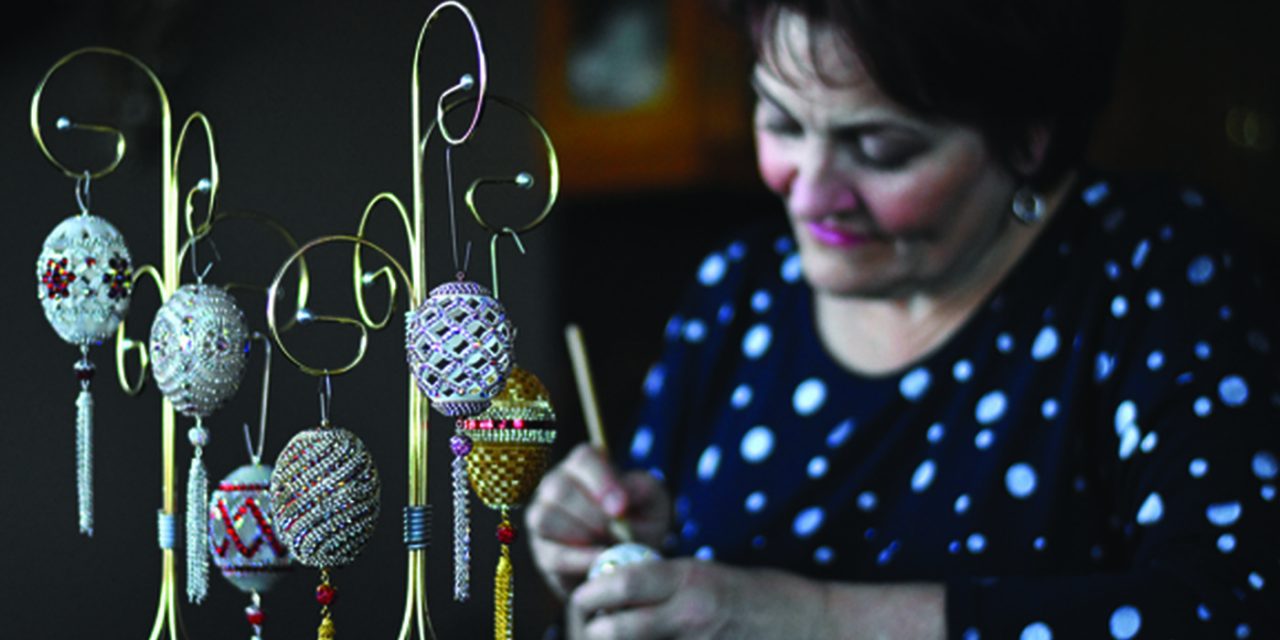 A local nurse is making the Holiday Season sparkle with her homemade duck egg ornaments.

Valerie Folk began creating the ornaments in 2018 as a pastime.

“I enjoy making them. I find it very relaxing,” Folk told the News. “First I just started making them for myself and then one of the girls from work saw it and said, ‘I’d love some of those,’ so then I made some for her … and then it just kind of went from there.”

Folk uses locally-sourced duck eggs for the ornaments and decorates them with Swarovski crystals, rhinestone chains and other delicate decals. Though she and her family used to decorate pysanky – traditional Ukrainian dyed wax eggs – Folk had never before made anything with egg ornaments. Since picking up the craft, she has experimented with different types of eggs, decorations and designs.

“It’s just kind of a trial and error,” she laughs.

“I drill a hole in the top and the bottom with a dremel and then just blow the yolk out,” said Folk. “From there, I draw on it, then I carve it … then I wash it off to get my pencil marks off, then I start decorating … The hardest part is deciding what colour to make things because they’re all so nice.”

Each ornament is unique in both design and structure, depending on the shape of the egg, says Folk. “Some are rounder, some are more oval, some are more of a teardrop shape,” she said.

It takes Folk approximately three hours to make one ornament; she estimates she has made more than 800.

“It seems like every year now, I just do a little more,” she laughed. “I make them because I enjoy it, but after a while you have to get rid of them because you have so many.”

Folk is selling the ornaments at local markets and through custom order. She also has a Facebook page titled Val’s Eggs.

For her next project, Folk is looking to make an ornament with a moving component inside. She has previously crafted a carved goose egg with a motor inside which gave the illusion of the butterfly flying and earned her a ribbon at the Medicine Hat Stampede, but she hopes to minimize the scale to fit inside the duck eggs.

“It’s just kind of you see an idea and you think, ‘Let’s make that into (an ornament),’” said Folk.

Despite her success, Folk doesn’t intend to make ornament creation her profession.

“It’s just more of a hobby,” she said. “Every egg I make; I make it the best I can and I love every one of them.

“I think it’s just nice to have something beautiful around. The world is so crazy; it’s just a little something that’s homemade. It’s something nice I can do for someone .. If it makes, them happy and they look at that and they love it, that’s all that matters.”