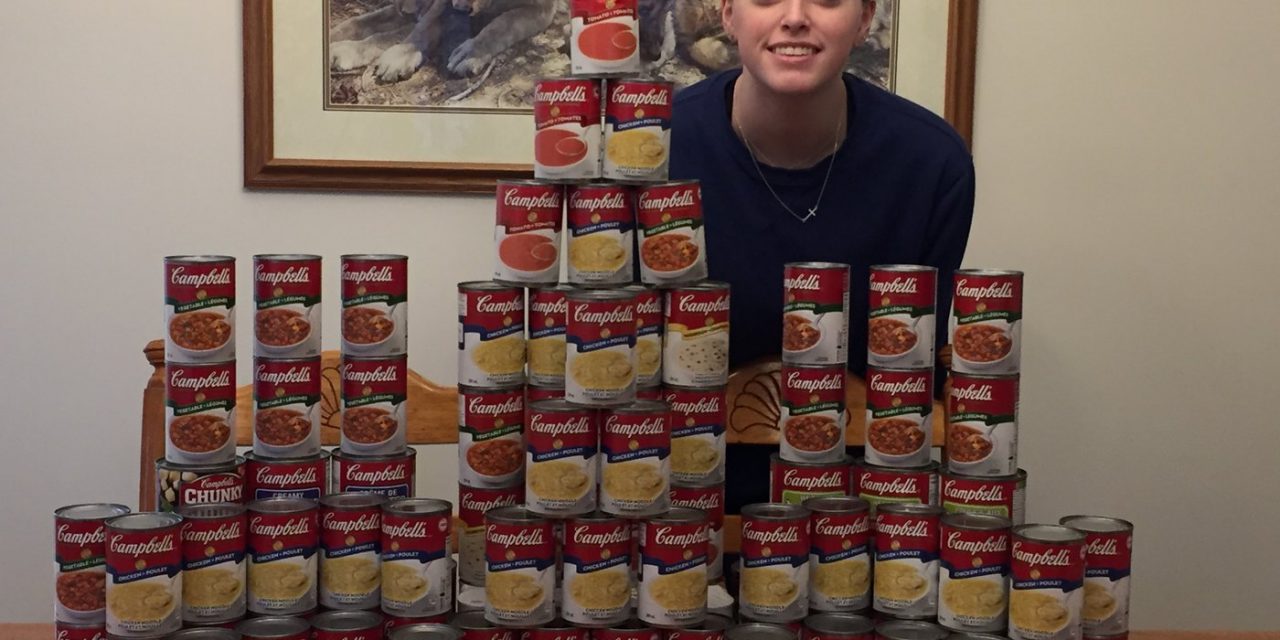 A Strathmore high schooler who is prolific in her charitable efforts is at it again, bringing back a program she launched to aid veterans, for a second year.

Emma Moore (17) has been involved in donation and charity campaigns since early in her youth. She has once again launched her Soup 4 Soldiers program, which aims to raise non-perishable food items for the Veteran’s Association Food Bank.

“I honestly think this is so important because food security is a really big issue in our society as a whole and especially food security for veterans and service members,” said Moore.

“It’s really close to home for me because we had family members who are in the Navy and Army. We’re going to be dropping off the cans and non-perishable goods at the legion in Strathmore.”

Moore explained the original idea for the campaign last year came up when she discovered the local veteran’s food bank would not have enough food for those who relied on it.

Further, it was something she said she would be able to do for veterans as Remembrance Day ceremonies were cancelled due to COVID-19 disruptions.

“We couldn’t have a Remembrance Day ceremony because of COVID-19 so I thought this was super important to almost honour them and help them out because they have helped out (the) country so, so much,” said Moore.

“Because of all the different isolations and being quarantined at school and families going through some harder times, people’s mental health really took a toll last year … and how everything was always changing … I really thought it was important to help youth … and give them the resources they needed to help themselves and get through the quarantine.”

“I feel like this year we’re having so much of a bigger response than we did last year so I’m really hoping for 5,000, but like with every project I do, I’m ecstatic and so happy with anything people are willing to donate,” said Moore.

Those who were interested in donating were able to do so by coordinating a pick-up or drop-off with Moore herself, or by stopping in at one of the supporting schools.

Moore explained her drive to give back is like second nature and she was allowed to blossom after initially engaging in charity efforts during her early years.

“I’ve always been really into giving and my parents really taught me that giving back is one of the best traits you can have. So, in grade five, I went to the Christmas Hamper (Society) to stuff hampers with two of my friends and our parents,” she said.

“It really opened my eyes to see how many people were actually in need because, yes you hear about it in school and from your parents, but to actually see it with your own eyes and see the need really inspired me.”

Moore’s program ran locally from Nov. 2-9. Prior to publication, there was not yet word of exactly how many non-perishables were collected through her initiative.

She added for the community to look forward to future projects she has in store for 2022.