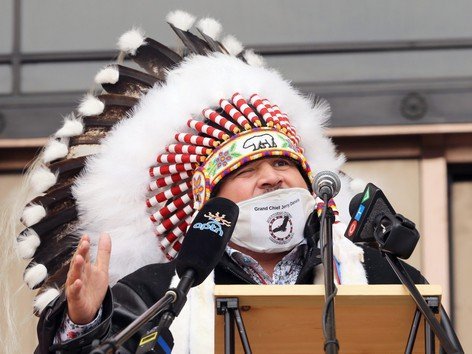 The Grand Chief of the Southern Chiefs Organization (SCO) says he was outraged when he heard that Indigenous parents were recently denied the opportunity to register their newborn child’s chosen name, and he now wants to see immediate changes to how birth names are registered in this province.

“Imagine being at the hospital following the birth of your child, and not being able to register that little one’s chosen name,” SCO Grand Chief Jerry Daniels said in a media release.

“That’s the reality facing one of my citizens right now, and likely countless other First Nation families throughout this province.”

According to Daniels, Carson Robinson of Sagkeeng First Nation and his partner Zaagaate Jock recently celebrated the birth of their first child in a Manitoba hospital.

The couple had chosen for their daughter a traditional Mohawk name which includes a colon symbol, but when they went to complete her birth registry were told her name could not be entered into the system, so it could not be officially registered as her birth name.

According to Section 3 of Manitoba’s Vital Statistics Act, when registering a birth name in Manitoba “the given name and the surname must consist only of the letters ‘a’ to ‘z’ and accents from the English or French languages, but may include hyphens and apostrophes.”

But under the current system, Daniels said characters like colons, which are characters used in some traditional Indigenous names and languages cannot be registered on birth registries.

“From where I sit, this is not an appropriate excuse when parents are being denied the right to register the name of their child,” Daniels said.

Daniels added he does not believe the current system is something that would be difficult to change or adjust to allow for more characters.

“We are literally talking about a common symbol on any computer keyboard,” Daniels said. “So we are asking our provincial Treaty partner to rectify this situation immediately.”

Daniels also believes that an update to the system would be another step towards reconciliation with Indigenous people in Manitoba.

“The Path to Reconciliation Act clearly states that the province must take immediate and long-term actions that are responsive to the priorities and needs of Indigenous Nations and Indigenous peoples,” Daniels said. “I can’t think of a better opportunity for the Premier to put these words into action.

“To further delay this change only serves to detract from the spirit of true reconciliation.”

The Winnipeg Sun reached out to the province for comment, and in an email a provincial spokesperson said they are now looking into the issue, and do hope to make changes that would allow for more characters to be used in birth names.

“Manitoba is actively working on the inclusion of additional characters, including exploring potential legislative amendments,” the spokesperson wrote. “This will require consultations to ensure changes are made appropriately to meet the needs of community.

“The Vital Statistics Branch (VSB) refrains from discussing specifics of any situation publicly; however the VSB does want to work towards a solution with the parents who have come forward.

“The VSB is in communication with other provinces to learn and share experiences and it is of importance for all jurisdictions to work with their federal counterparts, as they are also responsible for identity documents and inter-jurisdictional systems.”