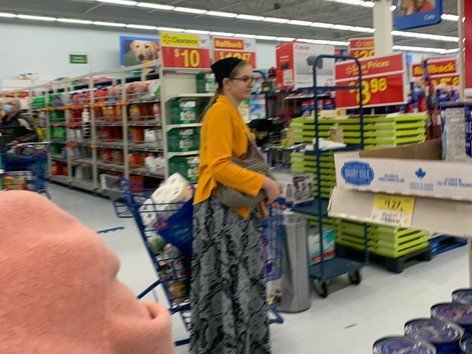 Images posted on social media over the weekend showed multiple shoppers in the Walmart store in Winkler shopping while not wearing masks or face coverings, and the woman who posted the pictures said she is fed up with what she said is a “complete lack of enforcement” of mask mandates in the community.

On Saturday a post from a Twitter user with the Twitter handle @wpgmomma_204 showed pictures of several people in the Walmart in Winkler without masks on, and what looked like little enforcement of current mask mandates in the store.

The pictures were posted by a Winnipeg women named Janet who did not want to give her last name, but agreed to speak to the Winnipeg Sun on Monday.

Janet said that although she lives in Winnipeg, she has family including children and grandchildren that live in the area and shop at the Winkler Walmart, and that her daughter has been telling her for over a year that the Walmart in the community is not enforcing mask mandates.

“She has been telling me for a long time how bad it is in Winkler, and she said when she went there on the weekend it would be lucky to see even 25% of the shoppers in that Walmart wearing masks,” Janet said.

“And I finally just snapped and asked her to send me some pictures so I could post them online, because I don’t think people realize how bad it really is.”

She also said she believes there should be additional enforcement officers sent to Winkler to enforce the rules at Walmart and other retail stores in the area, because enforcement efforts now are just not working.

Janet also said she is increasingly concerned about the ongoing and growing anti-vaccination movement she is seeing in areas like Winkler.

“It’s become a cult and that’s the only way I can describe it, and that’s scary because it is so hard to change people’s minds once they are in that cult mentality.”

This is not the first time a social media post has publicly called out mask enforcement in Winkler, as back in July Carman area agricultural producer Ryan Pritchard posted a scathing Facebook post, after he said he saw many shoppers in the Winkler Superstore shopping without masks.

Winkler also currently has one of the lowest vaccination uptakes in the province.

The Winnipeg Sun reached out to Winkler Mayor Martin Harder on Monday to ask for comment on what can be done at the city level to improve enforcement, but in two separate emails Harder explained that he did not want to answer any questions.

“There is no answer I can give you, other than people have made choices as to how they view their life,” Harder said in an email. “98% of tickets issued are from out of town, and the main problem is those two locations.

“They need to control their environment in the store.”

In a second email, Harder further attempted to explain why he did not want to do an interview.

“All I say gets used against me from both sides, so it doesn’t matter what I say, I will get blasted the next day,” he wrote.

“We have tried to be fair, and show respect to people in our city and region. So why would I put myself into that situation?”

Last week when asked about health order enforcement in the province and particularly in the Southern Health region of Manitoba, which includes the city of Winkler, Premier Heather Stefanson defended the province’s efforts to enforce the rules.

“In fact we know that in Southern Health in particular between October and December of this year there has been 68% of the tickets that have been issued, so we take this very seriously.

“I don’t want anyone out there to think that we are not taking enforcement seriously.”

The Winnipeg Sun reached out to management at the Winkler Walmart location for comment, but an employee who said she was part of the management team at the store said “at this time we have no comment.”

But in an email a spokesperson for Walmart Canada said, “Safety continues to be a top priority at Walmart, and we will continue to take measures necessary to support the well-being of our customers and associates.

“In most stores, we have an associate at the door who reminds customers about the policy and takes reasonable measures to enforce it. Given this issue affects many retailers, we are working closely with the Retail Council of Canada, local governments and provincial authorities to reinforce adherence to mask policies.”