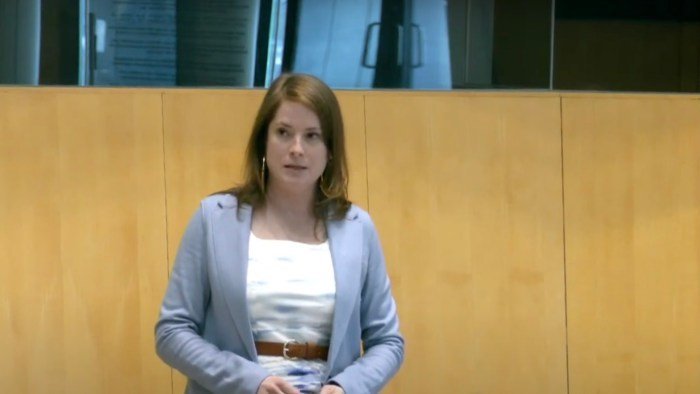 The Northwest Territories government needs to do a better job to address safety concerns and the inadequacy of some public housing in Yellowknife, especially for families, according to one Yellowknife MLA.

Great Slave MLA Katrina Nokleby told the Legislative Assembly on Monday that she often hears about the lack of security and poor conditions at the Simpson House and Norseman Manor apartment buildings in the city’s downtown. As a result, some parents have told her they don’t feel their children are safe in the building.

Nokleby said she has received photos, videos and messages from individuals living in the two buildings that showcase issues like broken locks and windows, filthy hallways, poor maintenance, and exposure to substance abuse by other tenants.

Both properties are owned by Northview REIT but some N.W.T. public housing clients live in the buildings, according to Nokleby.

“This government, as a landlord, has a responsibility to ensure these homes are safe and suitable for habitation,” she said.

“However, this is not always the case.”

Nokleby said families placed in the apartments have limited alternative housing options because of the lack of available units in Yellowknife and other N.W.T. communities, and the monopoly held by rental companies.

“Housing clients literally have no options but to take substandard [and] dangerous housing or to couch surf, becoming a burden to family and friends, further compounding mental health issues,” she said.

Concerns with Northview’s dominance in the North’s housing market and related housing issues in Yellowknife were detailed in a series by CBC in August.

Housing minister Paulie Chinna said the Northwest Territories Housing Corporation and Yellowknife’s local housing organization have been meeting regularly with Northview to establish some security solutions, totalling an “annual investment of over $50,000 by Norseman Manor alone.”

Nokleby said the housing corporation’s recent acquisition of the Nordic Arms Apartments from the YK1 school district could offer a chance for the department to look at a different model of housing. She suggested focusing on the social aspects of housing beyond just the physical infrastructure.

“I encourage [minister Chinna] and the department to look at this building as an opportunity to create a new housing model, one that integrates social programming and client services,” Nokleby said.

Nordic Arms is a 24-unit apartment building on Franklin Avenue that was recently sold to the territorial government, although the exact details of the sale are private.

Chinna said the department is anticipating clients may be able to move into the building by March, and current tenants will meet with housing corporation staff “to discuss transition planning.”

Terry Brookes, the chairperson of YK1’s board of trustees, told Cabin Radio the school district chose to sell the building to the housing corporation as the government said it would assist tenants in relocating. He also said tenancy was secured until at least the end of the school year.

Chinna said the selection process for who will receive a public housing unit in the building “will be done in accordance to an existing public housing program policy.” She said she would bring a note back to the department to see if it is possible to prioritize vulnerable families on that waiting list, following a request by Nokleby.

Chinna said the department is also working with the federal government and the YWCA N.W.T. on how to offer more support to Lynn’s Place, which offers transitional housing for women. She said an announcement it is anticipated in the near future.

Chinna added the housing corporation would consider cost-sharing for the project.

The YWCA previously offered more than 30 units of family housing, but a fire at the Rockhill apartments in 2018 destroyed the building and those units have not been completely replaced.