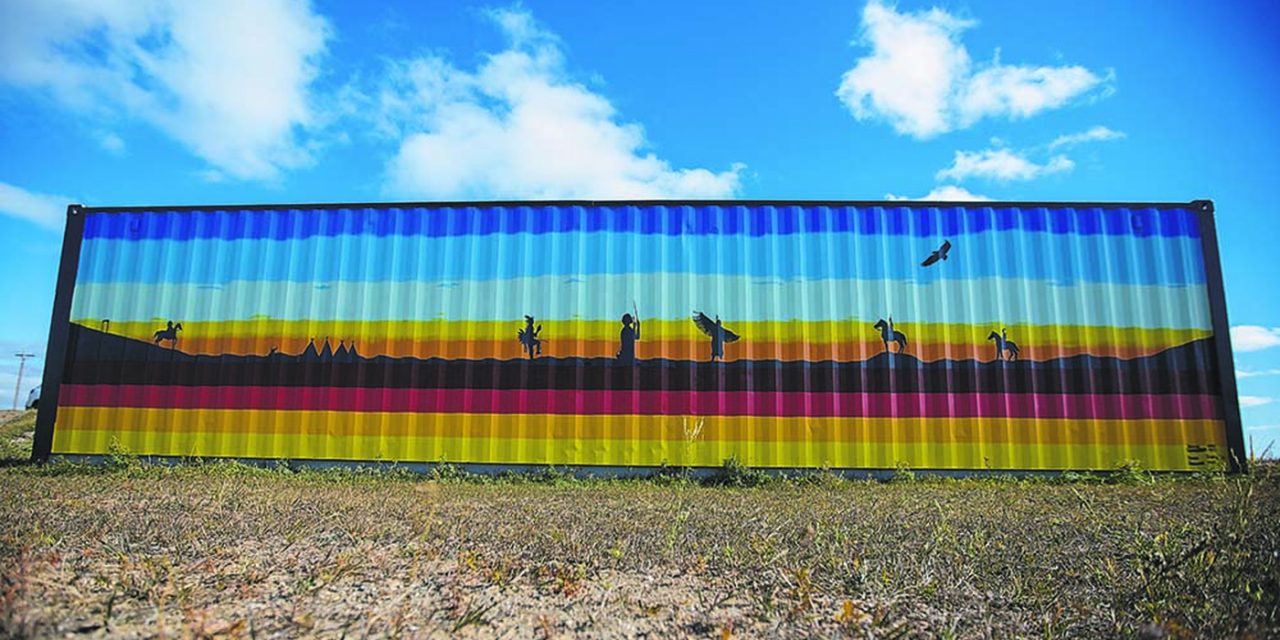 CANUPAWAKPA — A newly painted mural in Canupawakpa Dakota Nation is helping capture the past while looking to the future.

The mural installed by Canupawakpa artist Jessie Jannuska and her  family pays homage to an old mural lost to the nation when the  Canupawkpa community hall burned down in 2019.

Jannuska installed  the artwork over the summer, honouring the legacy of the previous mural  while adding her unique spin to revamp the historic art piece.

She  was compelled to create the mural to help celebrate the community  while recognizing Canupawakpas’s past. She added the project was  especially exciting because the shipping container it has been installed  on is in the centre of the nation, located beside the powwow grounds,  band office and new community centre.

“I hope people feel pride in  their community, that there is something beautiful there to encapsulate  the community’s sense of tradition,” Jannuska said. “I’m just glad I  could do this little act of beauty and rejuvenation for the community.”

The  40-foot by eight-foot piece was painted on a shipping container. As of  now, it remains unnamed because Jannuska is hoping to locate the artist  of the original mural and pay homage to them. However, this has proven  to be a challenging task as the original mural at the community centre  was in place longer than she has been alive.

The new Canupawakpa  piece marks her first solo mural, she said, and it took a significant  mind shift to create because it is so expansive in comparison to the  small, intricate art pieces she typically works on.

Jannuska is  the only person from Canupawakpa First Nation with a bachelor of fine  arts with honours, she said, explaining how she saw the project as a  chance to give back to her community.

It was a great opportunity  to take on a mural because it’s an art form she had been hoping to  explore as an artist. She previously worked on the star blanket mural in  Brandon, helping lay the paint, and also worked on a mural in Winnipeg.

The piece took careful planning and tedious math to realize the vision she had in her head.

The  mural soon became a family affair, she added, as her husband John  Jannuska and siblings Santre and Angel Fosty helped bring it to life  over the course of a month.

Jannuska estimates she and John spent  about 90 hours each to complete the piece and her siblings spent around  50 hours working on the mural. She added this does not count the  preparation that went into planning out the image for the shipping  container.

Her family lives about 10 minutes away from the site,  and Jannuska and her husband stayed with them as they worked to finish  the project.

Jannuska added she appreciated how the project  allowed her to spend more time with her father and grandfather, bringing  them closer together.

“They would constantly come up and other community members would come up and they would be excited,” Jannuska said.

Preparing  the shipping container for the painting was a challenging task, as it  had old vinyl lettering and rust that needed to be scraped and sanded  off before they could even make a brushstroke.

The silhouettes  featured on the mural were inspired by the original mural in the  community centre, Jannuska said, adding she worked to create more  intricate dancers for the new piece.

One of her favourite aspects  of the mural is the silhouettes of powwow dancers that have carefully  laid ribbons to highlight the movement of the dancers. She especially  loves the silhouette of the men’s fancy dancer because it is based on a  dancer from the community. The image came from a photo Jannuska took at  a powwow.

“I like using my own reference material when I can,” Jannuska said.

She added each of the silhouettes that appear on the mural were hand-drawn with pencil before committing to a painting.

Other  aspects of the piece include silhouettes of a burial symbol, a man with  a headdress riding a horse, a buffalo skull, teepees, powwow dancers,  two other men on horseback and an eagle.

The colour palette was  based on the old mural, but has been updated to bring more vivacious  colours to the piece, she said, and she worked to blend the colours  smoothly together.

“I tried to put my own spin on it,” Jannuska said.

She is unsure what the colours signified to the original artist.

John  added they wanted to keep the same four colours that appeared on the  original mural to help bring back the memories of the original piece at  the community centre.

Jannuska hopes community members that visit  the mural will have memories of the old mural and good times at the  community hall brought back for them.

“When people and elders come  and look at this thing, they’re going to be re-thinking about the old  community centre and bring back those memories they have with it,” John  said. “It seems like everyone here was really stoked and really pumped.”