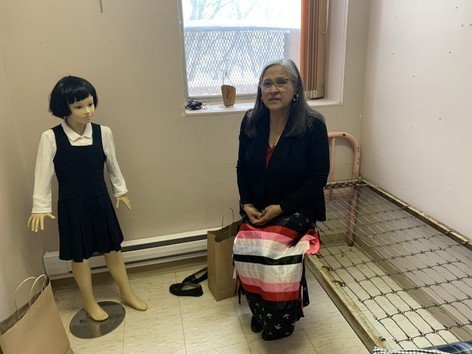 Every time that Lorraine Daniels walks into the National Indian Residential School Museum of Canada, she said she feels the weight of the dark and tragic legacy of the residential school system, and what that system put her and so many Indigenous people through for so many decades.

“You need to reveal the truth no matter how hurtful, and ugly, and painful that truth is, because the truth sets us free,” Daniels, the executive director of the National Indian Residential School Museum of Canada, and a residential school survivor said while giving a tour of the museum on Tuesday.

The national museum is set up in the building that was formerly the Portage la Prairie Indian Residential School, a residential school that ran from around 1915, until it was shut down in 1975.

But unlike many former residential schools that were torn down after closing, the building that once housed the former Portage la Prairie Indian Residential School still stands today, and has been designated as a national historic site.

A portion of the building is now home to the museum, which features historic artifacts, documents, photographs and displays all to educate those who come through its doors about the history of the residential school system here in Manitoba, and across Canada.

Daniels said the bed, the uniform, and the haircut are all very real to her, because she remembers being forced to sleep on a similar bed, and wear a similar outfit and haircut when she was in a residential school.

She said she also remembers the loneliness she felt so many nights when sleeping on one of those beds alongside so many other sad and lonely children.

“There were so many lonely nights thinking about my parents,” Daniels said. “When I was taken I was told I was just going on a trip and would be back soon, and then we were all put into the school and told we had to stay.

“I remember so many of us would just sit up and cry all night, we would cry for our parents.”

“I had to do what my parents told me to do, and I didn’t ask too many questions until I got older,” she said. “I had some anger towards my parents for sending me away, and I didn’t learn until later they were forced to send me away.”

The museum also features a room that celebrates traditional Indigenous culture, a culture the residential school system tried for so many years to eradicate. Another table is filled with artifacts from the school, including school photos, a display of the straps teachers would use to punish children, a number of pieces of artwork, and a replica of the former school.

“I want people to learn the truth about what happened at residential schools, and that is why this museum is so important,” Daniels said. “We need people to be educated about the real experiences of the survivors, so we can all heal together.”

Anyone looking to get more information about the National Indian Residential School Museum of Canada, or who wants to book a tour of the museum can visit their website at nirsmuseum.ca.