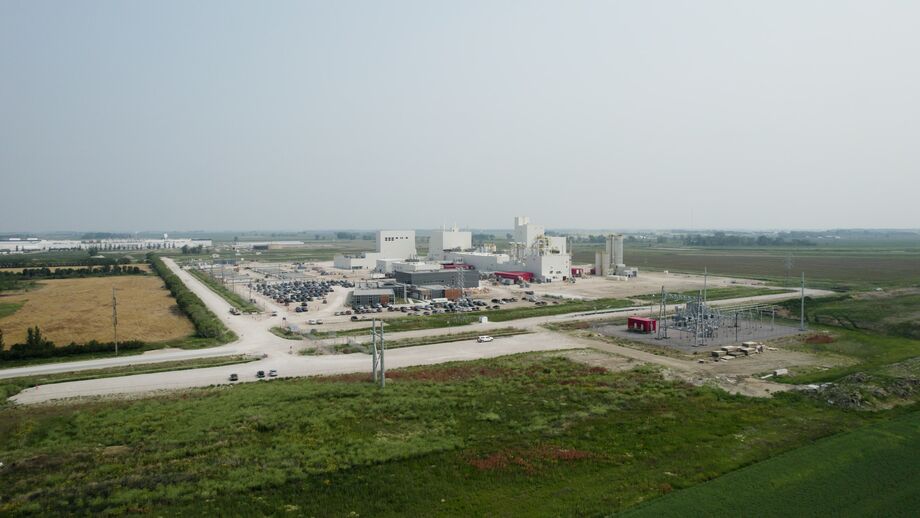 The new Roquette pea processing plant in Portage la Prairie is expected to be a boon for Manitoba farmers and the agricultural  industry.

“We’ve seen our pea  acres increase in response to the contracts that Roquette has been  offering. Farmers have taken those up because they obviously see that as  a way to make money,” Domitruk said.

The plant has prompted  provincial pea producers to push the market forward, he said, adding  that other provinces including Alberta and Saskatchewan have invested  heavily in the development of pulse crops while Manitoba has not done so  to the same extent prior to the announcement of the plant.

These  investments will present opportunities in value-added processing that  will accrue benefits for the province, he said, while at the same time  increasing the production of legumes like peas and soybeans serving as a  way to combat climate change.

“We’re really reducing the carbon  footprint of crop production by expanding the growth of peas and  soybeans,” Domitruk said. “We think the time is perfect. Win-wins are  now in front of us, to reduce carbon footprints and also generate jobs  and economic activity through the value-added processing of these  legumes.”

Demand for pea protein has been growing — multiple  industry estimates expect an annual global growth rate of between 15 and  24 per cent in the next decade.

Portage la Prairie was chosen as  the site for the Roquette plant because the region produces the most  peas in the world, the city is close to Winnipeg and has easy access to  the United States — shortening supply chains and securing access to a  high-quality product.

The plant sits on 60 acres in Portage, and  the facility is looking to expand in regards to future production on an  available 200 acres they have purchased.

The plant offers another  market for crops grown by producers — an important step because Manitoba  has not been a big producer of yellow peas for several decades,  Domitruk said.

Manitoba is becoming a place to invest in these  kinds of facilities, and the hope is the new plant marks the start of a  new trend in the province. Domitruk said it could be the first step for  rolling out new markets in the province and delivery opportunities.

“The more the better from the farm perspective,” Domitruk said.

He  added the opening of the MERIT Functional Foods Corporation plant in  Winnipeg serves as another example of the growing greens economy taking  root in the province — a promising trend from the farm perspective.

He  said Roquette and farmers have a joint interest in building resiliency  into the production of crops to help ensure the industry can continue to  thrive.

The company has made a significant investment in the  province, and it will be doing everything it can to ensure the continued  flow of peas and raw materials into the plant.

From a farmer’s perspective, they want to see the same thing, Domitruk said.

“We  don’t want to plant crops to have them fail and succumb to the impacts  of extreme weather,” Domitruk said. “We at Manitoba Pulse and Soy Bean  Growers have made some significant investments in plant breeding,  agronomy and other areas to build resiliency and Roquette has also made  some investments.”

He added the organization is working on some  small programs to ensure the quality of peas, marking the start of  promising collaborative opportunities to build resiliency.

The  industry is already grappling with extreme weather and will be forced to  for years to come. For example, growers saw a reduced yield of peas in  2021 due to the drought on the Prairies. The crops also face the threat  of excess moisture. Peas are not adapted to wet fields and will  encounter this and come up with ways to prevent damage.

Domitruk  added they are seeing the introduction of new pulse crops in the  province that in the future may be of interest to companies like  Roquette. He cited fava beans as an example — the crop is receiving a  lot of attention as an up and comer and could see the landscape shared  between peas, soybeans and fava beans as sources for plant protein.

The  value-added processing ventures associated with these crops will create  significant waves of employment opportunities, he said. The province is  going to see ongoing employment not only from work at the plant but in  its construction and ongoing maintenance. These effects will ripple out  and also benefit trucking and transportation.

“A lot of people in  the rural communities will no somebody who is either working for  Roquette or working in a business that is associated with Roquette,”  Domitruk said.

The Portage plant alone will have a full staff of 120 — 114 positions have already been filled.

“It  is an exciting time, but that feeling is tempered by the challenges  that lay before the industry — it cannot just stop at having the plant.  [We] need to continue to nurture growth to ensure the production of peas  is sustained into the future.”

It will require a significant investment of money, time and effort, he said.

“It  is exciting, but we’re also taking a very sober approach to it. We’ve  got a lot of years of nose-to-the-grindstone work to do to keep up the  momentum and to sustain these industries,” Domitruk said. “It’s not  automatic. We’ll have to really make sure we’re investing right and  doing the right things to keep this momentum going.”