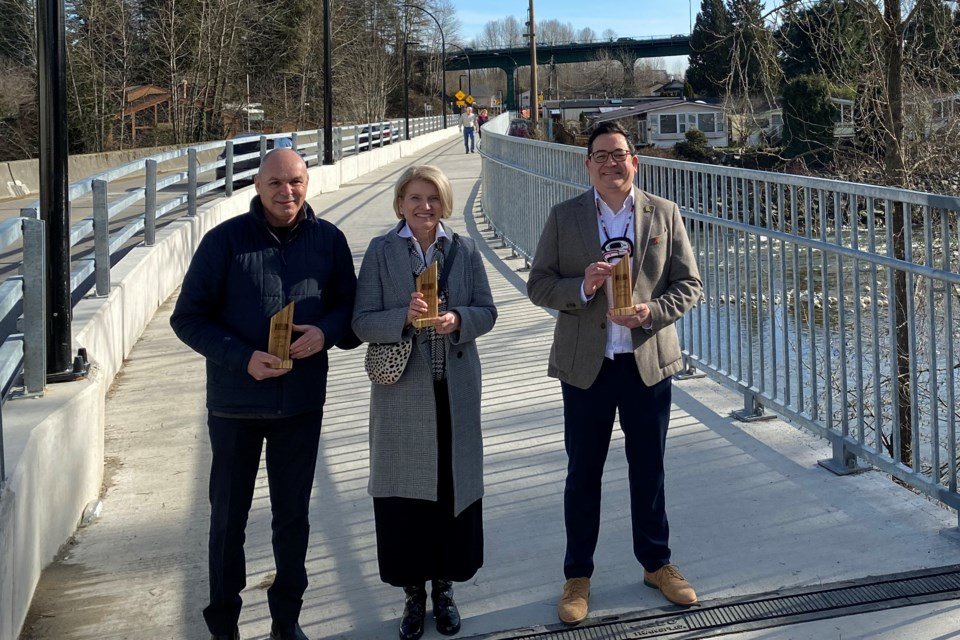 Received by Squamish Nation, the District of West Vancouver, and Park Royal, the bridge was reconstructed last year, with completion in August 2021. It was previously one of the most precarious bike and pedestrian routes on the North Shore. HUB North Shore had crowned it the district’s “most dangerous roadway.”

The new Welch Street bridge has a 3.5 metre-wide separated shared pathway with safety barriers and lighting.

In a statement, HUB North Shore liaison Peter Scholefield said the improvements mean both people walking and cycling can cross Cap River safely, and can continue in either direction along the Spirit Trail.

“Previously, people cycling would either share the narrow, busy bridge across the Capilano River with motor vehicles, which many people are not comfortable doing, or illegally ride on the narrow sidewalk that had a steep unprotected curb drop-down to the two traffic lanes,” he said. “The new multi-use path is separated from motor vehicles by a sturdy steel fence, and is wide enough to allow people to stop to watch wildlife or people fishing in the river below.”

Highlighted by the biking advocacy group as one of the highest priority gaps in cycling infrastructure on the North Shore, the new bridge fills the major deficit.

“The paved and lit path also includes safety improvements at the east intersection, improved connections to the Spirit Trail on the west side, and a staircase down to the river for people walking,” Scholefield said.

The bridge replacement comes after years of talks in the North Shore community. In 2017, West Vancouver council agreed to chip in $700,000 from community amenity contributions related to Onni’s Evelyn project. That was later negotiated down to $500,000 out of the $2.4-million total budget. The project was then delayed due to redevelopment and rezoning applications by Park Royal.

Going by many names over the years, including Wardance Bridge, Welch Street Bridge, Bridge Road Bridge, and White Bridge, the bridge will formally be crowned with a new name at a later date.