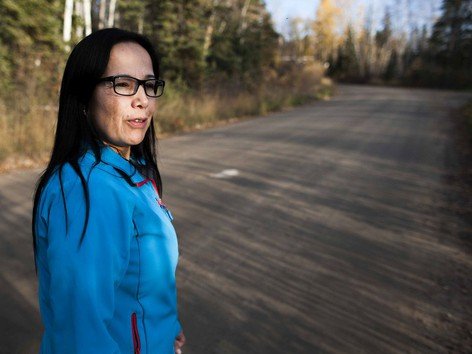 Brennan Janvier can talk all about the pitfalls of a lack of cell coverage in Northern Saskatchewan — if he has the bars for it.

“I started work here three years ago, and we’ve never had a cell tower here before,” said Janvier, the principal at Lac La Ronge Indian Band’s Sally Ross School in the community of Hall Lake.

That changed when the band spent $377,000 on a recently constructed cell tower near his school.

SaskTel finished construction of the tower on Tuesday, lighting up cell reception for roughly 500 people in the community, a news release said.

That means Janvier’s teachers will no longer have to go door knocking to contact students who’ve had to switch to distance learning without the benefits of land lines.

“I guess you could say it was pretty tough,” he said.

“You had to make sure we had scheduled your own time for that. Some homes (also) don’t have the luxury of having internet service.”

Even calling emergency services used to require running into the school for its landline phone, and waiting for them to call back. Now he can call from from anywhere in the community.

Earlier this year, a power outage that lasted four days also made it almost impossible to communicate, he said.

Ross said he’s glad the tower has been built, but the success came without financial support from the provincial and federal governments, despite the band lobbying for help.

However, the nearby Highway 165 West likely will have more service. It will make a difference for drivers involved in collisions, who will no longer have to knock on doors in the middle of the night to call for help, he said.

“For remote learning and virtual classes that have become part of the new norm of learning during COVID-19, the cellular tower in Hall Lake will surely help,” she said.

As that happens, Janvier hopes cell reception will bring more exposure to the community and assist with teacher retention — which has been a challenge in the past.

“Hopefully, this cell tower motivates them to come to our community.”