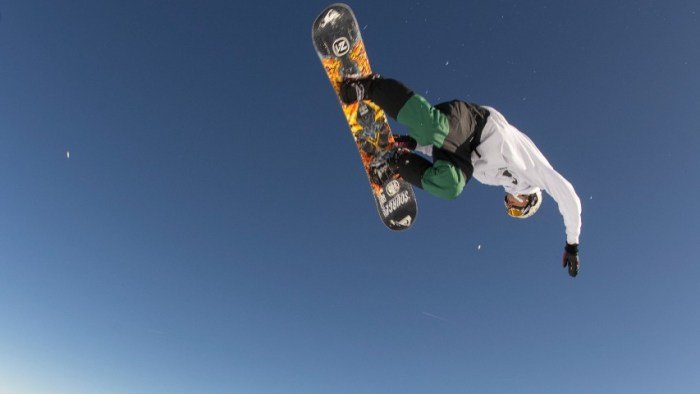 Eighteen-year-old Liam Gill, who is a member of the Łı́ı́dlı̨ı̨ Kų́ę́ First Nation in Fort Simpson, said he had dreams of going to the Olympics when he was a kid but didn’t think it would ever actually happen.

Hot off of competing at the Beijing Winter Olympics, where he placed 23rd in the men’s snowboard halfpipe event, Gill is now in the N.W.T. to snowboard with some of the territory’s youth athletes and visit family.

Gill and his mother Joanna arrived in Yellowknife on Wednesday afternoon and will be at the N.W.T. Snowboard territorials competition starting Thursday in Fort Smith. He’ll also be a guest coach at the 2022 Big Fun snowboarding event hosted by the Slide Zone Shredderz in Fort Smith.

Gill said getting to be a role model for youth who enjoy the sport is “crazy” and he’s excited to practice and ride with some N.W.T. athletes.

“I always had role models, but to have kids looking up to me, it’s just crazy,” he said. “I just love to inspire.”

After that he will head to Fort Simpson. Gill said the last time he was in the N.W.T. was as a baby, so getting the opportunity to visit Łı́ı́dlı̨ı̨ Kų́ę́ to connect with other members of his First Nation is “exciting.”

Originally an alternate on Canada’s Olympic snowboarding team, Gill found out last minute he’d be competing in the Olympics after his teammate and mentor Derek Livingstone was injured and could no longer compete.

Gill was the second-youngest and only Indigenous member of Canada’s snowboarding team in Beijing.

Gill said the support he received from people across the country and the N.W.T., including his First Nation, “really meant a lot” to him over the last several weeks.

Gill says he’s just getting started with his snowboarding journey, as he plans to continue working hard at the sport and give his all at the next Olympic competition in four years.

Born and raised in Calgary, Gill said he has been snowboarding since he was three years old, but originally started on skis.

He said his interest in the sport started when he was just two years old and saw his dad riding a snowboard while the rest of his family was skiing. Just days before Christmas that year, to his parents’ surprise, he asked Santa for a snowboard.

“Santa laughed at me and I kind-of took offence to that since I was three, but my parents had to find a way to get a snowboard within a couple of days,” he said. “Since then, I’ve been snowboarding.”

Getting involved with the halfpipe specialization wasn’t the easiest task, as Gill said the facilities are typically closed off to higher level teams or those who rent them. He said at first, he only got to use it during competitions.

“I always loved riding the halfpipe but I didn’t get to do it as much, so as I got older, I was really pursing slopestyle,” he said.

He then joined the Canada Snowboard NextGen slopestyle and halfpipe teams where he was able to participate in camps and get more experience in both techniques.

“Once I did one camp and I thought ‘I could go somewhere with this and I like to do it,’” he said, speaking of the halfpipe specialty.

Before the Olympics, Gill had represented Canada at the 2020 Winter Youth Olympic Games where he finished eighth in the big air category, 11th in slopestyle, and 13th in halfpipe.

“I stuck with it for a while and just more than a year later I made it to Beijing,” he said.

It didn’t sink in for Gill that he was at the Olympics surrounded by some of the world’s most influential athletes in the sport until he was going to do his first run in the men’s halfpipe competition.

“Everything happened so fast,” he said. “I really wish I landed a run, unfortunately I didn’t, but at the end of the day it was an experience and I felt like a winner just being there.”

Looking to the future, Gill said he’s hoping to return for the 2026 Winter Olympics that will be held in Italy.

“Hopefully in four years I can come back stronger,” he said.