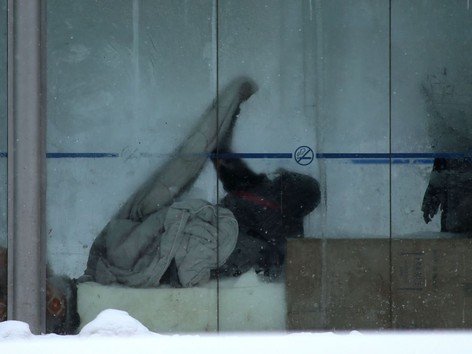 With the new and highly transmissible Omicron variant now spreading rapidly in Winnipeg, advocates who work with some of the city’s most vulnerable people are waiting to see what the next few weeks could bring and hoping they don’t see an outbreak of COVID-19 among Winnipeg’s homeless.

“With Omicron we are definitely concerned,” Main Street Project Inc. executive director Jamil Mahmood said on Wednesday, as another 947 positive COVID-19 cases were reported in the province.

“It’s just such a big unknown, but the whole pandemic has been an unknown, so it is something we have become accustomed to.”

Main Street Project is a Winnipeg-based organization that offers a number of services and resources to Winnipeg’s homeless population including temporary shelter and a van outreach program that sees advocates go out onto the streets and offer assistance to those who need it.

Mahmood said that soon after the COVID-19 virus first started spreading in Winnipeg, Main Street Project began working to get members of Winnipeg’s homeless population tested for the virus and to get vaccines into as many arms as possible as soon as those vaccines became available.

“I believe we have done a really good job and that the work that we and others have done is what has prevented a really wide-spread outbreak in the homeless community so far,” Mahmood said.

“It has been minimal so far and when we see the waves go up and down we go up and down with them, but the numbers are definitely not what we expected, as we did think that it would be far worse because we are talking about such a vulnerable population.

“We have been really successful at getting people vaccinated and also getting out there and bringing the vaccines to people.”

Mahmood believes one of the reasons that COVID outbreaks among the homeless have not been as severe as they anticipated is because for months the organization used their outreach vans to bring doctors and nurses to people who are on the streets and offer them COVID-19 vaccines on the spot.

“So when we go out and administer the shots that can slow down the rate of transmission and also lead to those who get COVID not getting as severe symptoms or possibly ending up in the hospital or in ICU.”

Main Street Project also has a 39-unit apartment complex that they have been using to offer isolation to those who have either tested positive for the virus or are symptomatic and awaiting test results.

But with Omicron now spreading faster than any other previous COVID-19 variant, Mahmood said he hopes the systems they have in place to help people get tested and isolated don’t soon get overwhelmed.

“We are definitely very concerned about that as we don’t have a ton of extra capacity, so if there is an outbreak we have those 39 units and then from there we would be relying on whatever is available through the provincial systems.”

Mahmood added they are also working to transfer symptomatic people to testing sights, but he also worries those transportation systems could get overwhelmed as well depending on how many people become symptomatic in the coming days and weeks.

And although he believes the efforts they have made so far have been successful at preventing wide-spread COVID transmission, Mahmood said they can now only wait and see how that could change with the Omicron variant spreading.

“Like we have been doing so far we are taking every step possible and we will continue to plan and be ready for whatever is coming.”