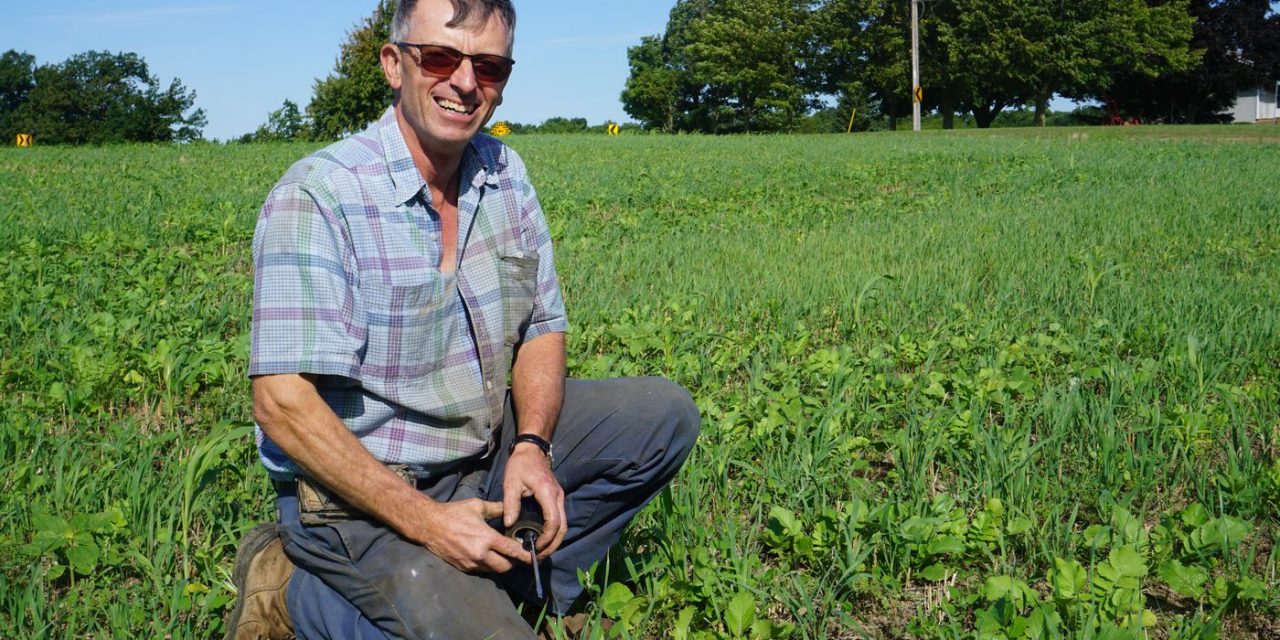 As the federal government tries to reduce fertilizer emissions through voluntary targets, farmers are finding new ways to be more economical in using it while still producing enough food.

In December 2020, the federal government announced the strengthened climate plan, which includes a target to reduce greenhouse gas emissions from fertilizer application by 30 per cent from 2020 levels by 2030.

Rather than enforcing a mandatory reduction on fertilizer use, the government hopes, through best practices, farmers will be able to use less fertilizer and still maintain yields.

Larry Dyck, a cash crop farmer in Lincoln, doesn’t see the government’s initiative as a danger, but does have concerns about it. “Am I threatened? No. Am I questioning it? Yes,” he said.

The biggest challenge, as he sees it, is measuring it. He’s not sure where the starting point is, and how to identify when we’ve hit that 30 per cent reduction target.

That’s not to say he’s not looking for solutions. After all, fertilizer is expensive, and no farmers are looking to waste any products, including fertilizer. However, the crops still need nutrients.

Dyck has been experimenting with cover cropping for the last seven year; a process where farmers plant other crops to sustain the soil for farming. This, on paper, produces a healthy, fertile soil, without the need for extensive tilling or fertilizer use. That’s because the plants leave nitrogen in the soil, and the roots leave holes where the cash crops can grow without the soil needing to be tilled.

Dyck also uses multiple crops in a field rather than monocropping.

For example, take oats and peas. Separately, oats are susceptible to disease, and peas are weak and can’t stand up. However, when you plant them together, oats hold up the peas, and the peas provide nitrogen to oats, preventing disease. Dyck said it gave a good yield of the crops, but they did need to be separated after harvest.

By using cover cropping and avoiding monocropping, Dyck said he uses less fertilizer, and less fuel because he doesn’t need to till the soil using heavy machinery.

However, he did point out it’s difficult to compare his method to those used by farmers who use tilling, who could also point to great yields. But he’s creating good yields himself. “How do we measure success? … I’m still here,” he said.

There are also doubts about the effectiveness of the method for corn. “How much fertilizer will it create for corn? Jury’s out,” he said. He also pointed out, farmers still need to create enough yield to pay the bills and support themselves. “There’s a lot at stake,” Dyck said.

Jerry Winnicki is concerned that if fertilizer use is lowered, yields will fall. “Everybody’s concerned,” said the agronomy manager at Clark Agri Service, an agricultural services company. “There’s got to be other ways of properly managing fertilizer.” He said to provide the proper nutrition to produce what consumers want, farmers must use a certain amount of fertilizer.

There’s also a financial angle: farmers need to maximize their yield from a certain area of land, which means using fertilizer to boost nutrients for the plants. This is especially true since input prices have gone up, in part, he said, because of the tariffs on fertilizer coming from Russia in the wake of the invasion of Ukraine.

He said some costs have almost doubled, but that isn’t reflected in the market price of crops, meaning margins are tighter. And that also means farmers don’t overfertilize, since it costs money and farmers need to be frugal.

The government is trying to convince farmers that not overfertilizing is a win-win. It’s good for the environment and for their costs.

But, at the end of the day, as Dyck puts it, fertilizer isn’t as important as the sun and the rain.

The Department of Agriculture and Agri-Food Canada did not provide a comment in time for print.

SIDE BAR: Is fertilizer harming the environment?

By placing the targets on fertilizer emissions, the government is trying to reduce the environmental impact created by nitrogen, a key ingredient in fertilizer.

An information package sent out by the federal department of Agriculture and Agri-Food Canada stated agriculture was responsible for roughly 10 per cent of Canada’s greenhouse gas emissions in 2019. And between 2005 and 2019, nitrous oxide emissions from fertilizer application in Canada increased by 54 per cent.

A 2012 study by the University of California, Berkeley found a link between the increased use in fertilizer and the “dramatic” rise in atmospheric nitrous oxide, a major greenhouse gas contributing to climate change.

This item reprinted with permission from   Grimsby Lincoln News   Grimsby, Ontario
Comments are Welcome - Leave a reply below - Posts are moderated