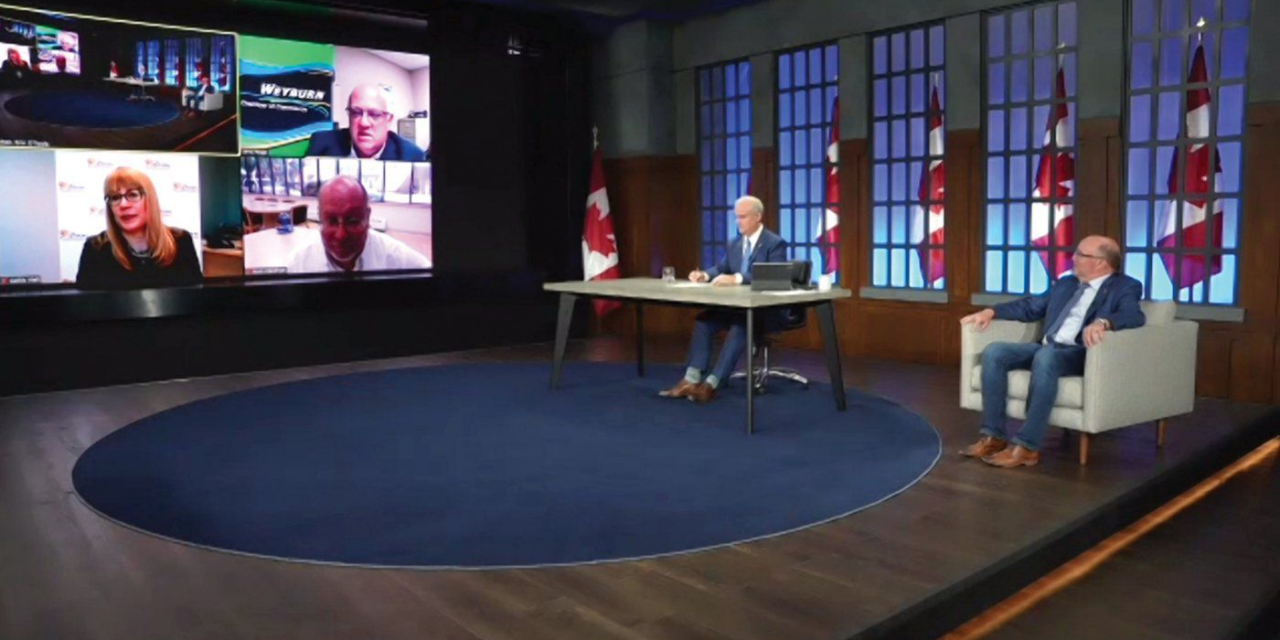 The first question comes from Greg Gillepsie from Moosomin. He’s curious about the Conservative approach to pipelines. Energy East was a project that would have had a big impact in the Moosomin area. The plan included a feeder pipeline from Cromer to Moosomin. That was a big impact on our community when it was cancelled, but now we see other resource projects trying to take our resource products to market cancelled. What would be the Conservative approach to pipelines?
I talk a lot about my military service but my first job when leaving home was working with TransCanada PipeLines. I inspected pipelines, I got my boots dirty and I know how important it is to get our energy to market is for price. As a young lawyer finishing law school I worked for the Canadian Association of Petroleum Producers and as an Ontario MP I have been one of the strongest champions for our oil and gas sector and for our innovation.

The failure of Trudeau on pipelines is probably the most historic failure in our country’s history. We had multiple pipelines going to approval under the Harper government, we had a balanced budget, we had investment coming to Canada and under Mr. Trudeau, we’ve lost Keystone XL twice, we’ve lost Energy East, he cancelled Keystone XL and had to buy Trans Mountain with our money. It shows his policies have made us poorer and have divided our country. In my first 100 days, the Conservative government will eliminate the prohibitions of Bill C-69 that have held back our energy sector and our natural resources because these same issues come up in my province, in Northern Ontario. There’s a long history of proud development of our resources. I think the measures of Bill C-69 were the reason Energy East was cancelled by TransCanada. Under Mr. Trudea they don’t even call themselves TransCanada anymore because there’s been such a signal sent by the Trudeau government that investment in resource development is not welcome. It will be under a Conservative government, and in fact, I have been talking about Canadian leadership on ESG, Environmental Social Governance, and Indigenous participation in the resource industry, or ESGI as I call it.

If you want to buy resources like energy, softwood lumber, minerals, and ensure they come from an ethical place where emissions are coming down and indigenous partnerships are struck and role of law is in place, resources should be bought from Canada and we’re going to turn that into a force for Canada rather than Mr. Trudeau’s attacks on the sector.

Regarding your climate change plan, what significant differences are there from the Liberal plan to your plan? What will the public see? Will we see different prices at the pumps or will it impact agriculture?
The biggest difference with the plan I proposed in March and Mr. Trudeau’s approach is my plan is not a carbon tax despite what some people like to say who haven’t read the plan. If you don’t send a cent to Ottawa it is not a tax. What it is, and I will acknowledge this, is we’ve talked about putting a price on carbon at a consumer level, but it would be a price that is a third of what Mr. Trudeau is proposing. Here’s the catch, it’s a price where people maintain their own account. That price for small business and farming operations would be sequestered in their own low-carbon savings account. Much like you would transfer between chequing and savings this would be a sequestered account. The only limitation on it would be for future purchases for small businesses or an ag producer is for it to be something that has an environmental positive on emission reduction, buying local, and efficiencies. It will actually open up private sector investment to access those sequestered funds, much like a RESP would put money into an account, it’s dedicated for that purpose.

Why we’ve taken this approach is that people don’t trust sending billions to Ottawa. Mr. Trudeau said he would never increase his tax but he’s tripled it, he’s broken his promises many times. This sets a price that is fair and allows people to be in charge, and remember this is our proposal as an alternative to Mr. Trudeau’s carbon tax backstop, a backstop that Saskatchewan, Alberta, and Ontario took to court. The Supreme Court of Canada backed up Trudeau’s plan but it did give the provinces time to come up with their own. If Saskatchewan comes up with one that meets the targets, I think that’s even better than what I am proposing. But what I’ve shown is you can tackle emissions without just sending more money to Ottawa.

This item is reprinted with permission from the World-Spectator. For the complete article, click HERE