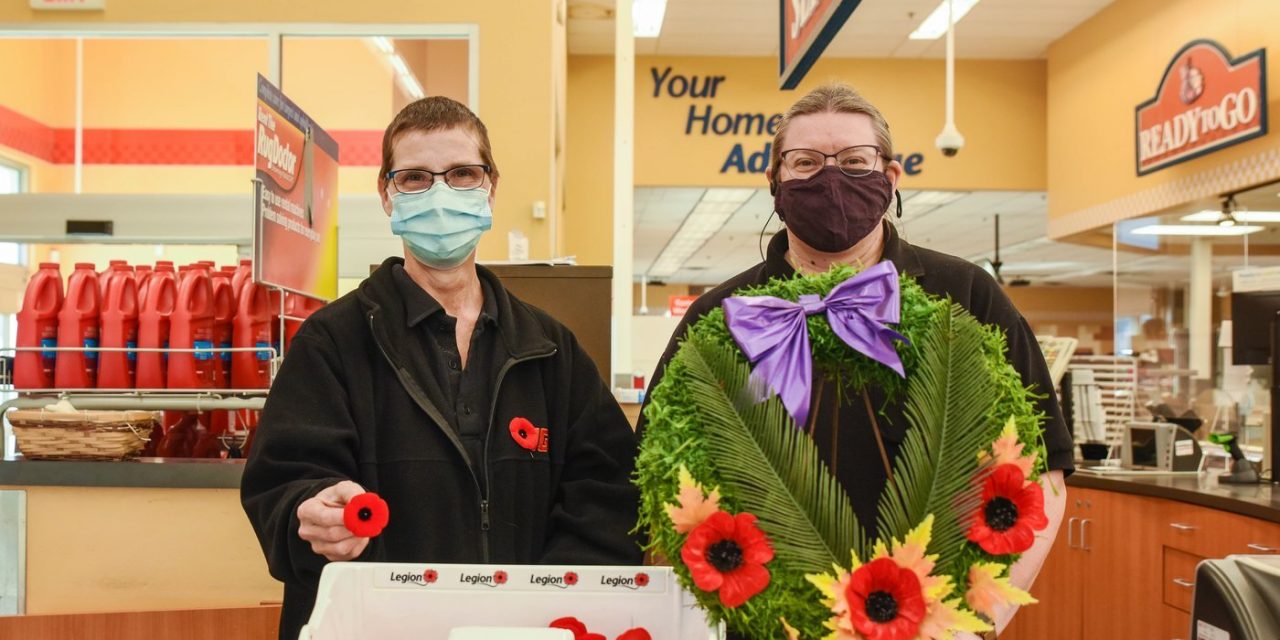 Every year, from the end of October until the morning of November 11, poppies are seen on coat lapels far and wide. Those who drop loose change or a bill into a poppy collection tray do so in hopes that their contribution makes a difference, but many have no idea just how impactful the donation really is. “The Poppy Fund in Whitecourt has changed lives. I don’t think most people in the general public are aware of what it means when you drop a dollar in that box and put a poppy on your collar,” explained Kyle Scott, Service Officer at the Whitecourt Legion.

Funds donated at the local level remain there to support veterans in the community. Donations provide financial assistance and support to veterans, both Canadian Armed Forces and the RCMP, and their families who need help. “We have such incredible support in Whitecourt. Our branch brings in money that rivals some of the small cities in the rest of the province. Often, per capita, we bring in more. I think a big reason for that is we are very transparent on our social media about success stories. We want people to know that this is what that money goes towards.”

Scott explained that the Poppy Fund is protected and publicly entrusted. He said that using the money involves diligent paperwork filing on their end and a high level of accountability. “We have to ensure that a person is who they say they are and that their service is what they say it is. If it’s a financial problem that they need assistance with, such as paying their mortgage or rent or their utilities, we have to make sure that the need is really there. I have to see their banking statements, and I have to provide copies of that to ensure that it is real.”

If a veteran needed a new furnace because theirs was broken and they couldn’t afford to replace it, Scott said they don’t hand over the funds. “I go out and find a gas fitter, and I say, I need you to put a new furnace in this house. You do the work, and I pay the bill. The reason for that is because we want to make sure the money is always going to go to exactly what we say it will go to,” said Scott. “It’s an extensive process.”

Scott said they had helped quite a few veterans using the funds donated through the Poppy Campaign in Whitecourt in the last year alone. “We’ve built a handicap ramp for a veteran and his spouse with mobility issues who couldn’t afford to build it otherwise. We had another veteran who was living in his car. We got him into a residence and paid for a couple of months’ rent, utilities and groceries. We also got a bunch of claims into Veterans Affairs for him. By the time those claims went through, he was enrolled in a few programs, and he was getting income replacement benefits.” In the end, the veteran’s life was completely changed for the better. “He was enrolled in schooling that Veterans Affairs was paying for, and then his disability awards came through, so he was no longer unstable.”

The Poppy Fund has also helped them get veterans somewhere fast in an emergency, something the veterans themselves wouldn’t have been able to do independently. “We’ve given emergency spending money to veterans to travel due to the death of their children or loved ones. We’ve also fixed vehicles for veterans that needed their vehicle to get to work and couldn’t afford to get it fixed themselves. We’ve repaired issues in people’s homes from a door to money for appliances. Honestly, the options are endless on how we can help them. If you can prove that the need is there, then there’s a way we can capture it. We just need those veterans to come forward because we can’t find them on our own.”

Scott said that veterans who suffer in silence need to come forward and receive the help available. “What struggles they have behind closed doors, no one’s going to ever find out about. The Poppy Fund has saved lives one hundred percent. We really appreciate every dollar, or ten cents, quarter, or five, ten or twenty dollar bill that someone puts in there. It is feeding people. It is putting a roof over their head. It is repairing vehicles and allowing them to be self-sustainable. It is changing lives. The options are endless. It’s an extremely important tool.”

This item is reprinted with permission from Whitecourt Press.