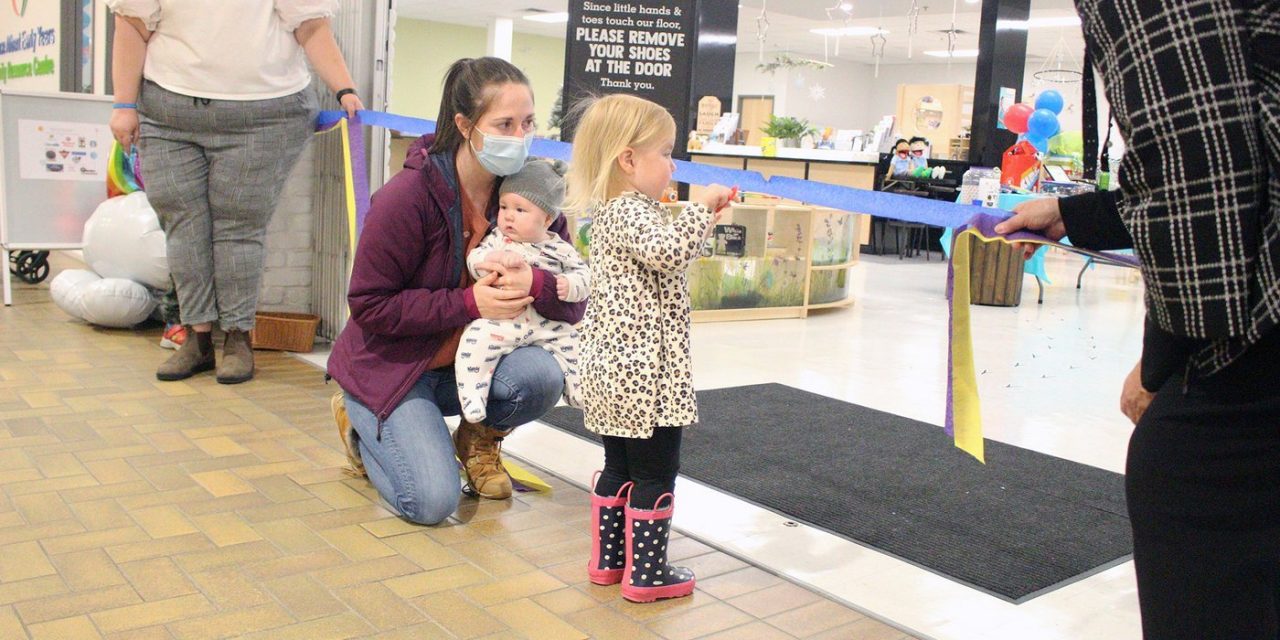 It was a long time coming, but the Prince Albert Early Years Family Resource Centre in the Gateway Mall finally had their official ribbon cutting on Thursday afternoon.

Staff, users and supporters gathered to celebrate the opening of the new location, along with the new Prince Albert KidsFirst office opening. The two spaces are both located inside Gateway Mall.

Family Resource Centre Coordinator Tobie Devitte was happy to finally have a public event for the location, which has been in operation since February, 2020.

“I think it’s just so wonderful to just publicly announce that we are here and in such an official way,” Devitte said,

“We have been open so long, but it is still bringing awareness to who we are and what we have done. I think it’s really big. I always feel like this is like a birthing experience in itself and we have been pregnant this whole time and now we birthed this beautiful place (that) it is coming to fruition and families are coming back.”

Devitte said the Family Resource Centre’s goal is to be a central hub for families with children from per-natal to 5-years-old. She wants it to be a place where they feel comfortable, and can ask questions about the early years and find links to the community.

“We just act as that visual point for families to come,” she explained. “Everything that we do is free. We just really want to link them to community agencies that are already in existence and we do a lot of referrals.”

Many speakers on Thursday cited research showing brain development occurs faster in the zero to five age window than at any other time in a person’s life. Devitte said that emphasizes just how important it is to have a hub of information for families.

“We know so much about (how) brain development in the first five years is so important,” she said. “It is just allowing families that space to come, especially with it being free. It was really important us  being in the mall, that being centrally located.”

Gratias explained that the new location of KidsFirst opened in April, 2021 after having been located at King George School. The program itself had been around since 2001.

Gratias said having the two locations side by side benefits both partners.

“It’s fabulous,” he said. “The two programs together just provides so much support for families in the community. It couldn’t be better.”

He said that the Gateway Mall was chosen because it serves as a gathering place for families, and is accessible via city bus.
“We are also very close to a lot of our other partners like ESIP and the PAGC Urban Services,” he said. “They are all kind of in the core. The whole idea was accessibility, and where would be a place that would be able to house it?

According to the federal government, objectives include expanding Francophone child care and including preschool children experiencing disabilities.

Devitte read a greeting from Mayor Greg Dionne who sent his regrets as city budget consultations are under way. Prince Albert Northcote MLA Alana Ross brought greetings from the province and Minister of Education Dustin Duncan.

Saskatchewan Rivers director of education Robert Bratvold, substituting for board chair Barry Hollick,  brought greetings on behalf of the division, who are an accountable partner.

Abby Ring cut the ribbon on Thursday. Ring currently utilizes the centre along with her mother Rebecca Ring and baby Ralph Ring.

Former Executive Director of  Prince Albert Family Futures  Donna Strauss was noted as a visionary behind the centre throughout the afternoon.

Superintendent of facilities for Saskatchewan Rivers School Division  Mike Hurd acted as project manager for constructing the facility and had the project completed on time and on budget.

General Manager Sharon Faul of Gateway Mall was acknowledged for her role in getting the project in the location.

In his speech Mick explained that the project really began in 2017 with consultation with partners, two years before the funding appeared, 2018  was community consultation and actual work began in 2019 and the centre opened in February 2020.

Devitte noted that the location serves other purposes.

“Even the fact of not having it in a school, that if families have trauma or experiences or anything like that than they have that as a safe meeting ground is really what the centre is entitled to be,” Devitte said.

“We are just happy to be able to work within the COVID regulations and offer programming. It is just wonderful to see community coming and partnering with us,” she added.

Following the ribbon cutting there was a chance to tour the Resource Centre.

“It’s very diverse,” Devitte said. “I like to partner with anybody and everybody who is willing to share. I think it’s wonderful that we have that ability.”

“We just invite all of the families with young children in the city to come down and have a look. These services are absolutely free,” Gratias added.