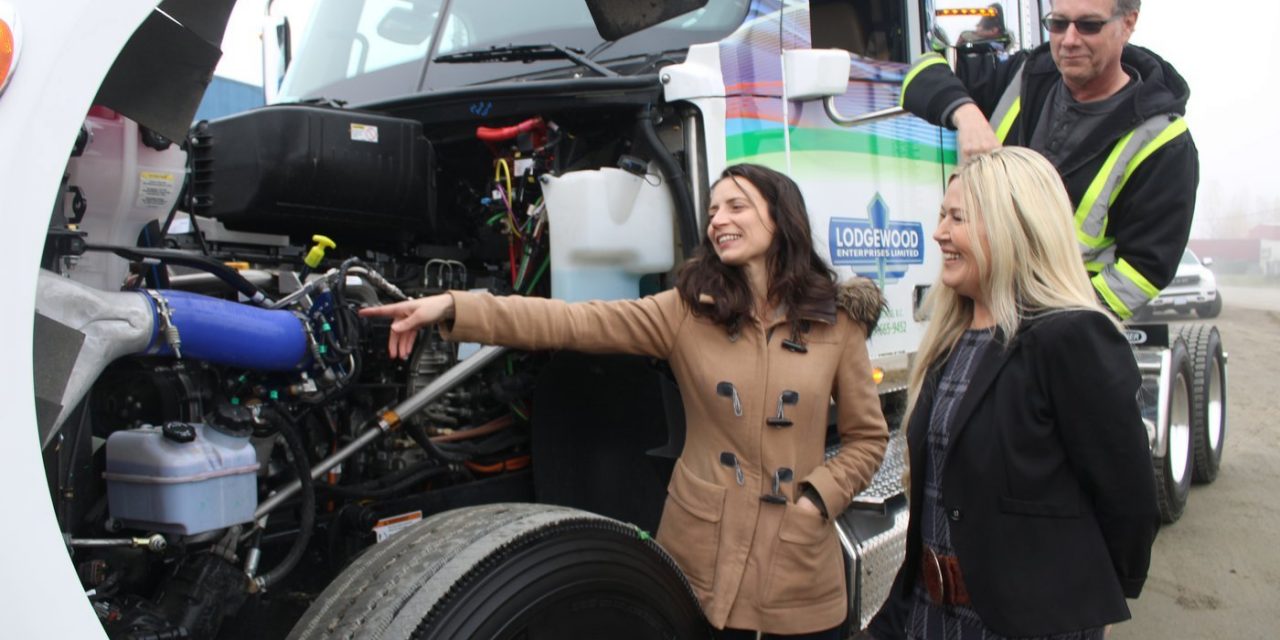 A Prince George-based trucking company has taken a step toward dramatically reducing its carbon footprint.

Lodgewood Enterprises took delivery this week of a long-haul semi-truck outfitted with system that allows it to run on blend of hydrogen and diesel for as much as 1,000 killometres and reduce its greenhouse gas emissions by as much as 40 per cent in the process.

The system poses no loss of fuel efficiency, range, power, torque or payload capacity and the fuel is provided at a slight discount to diesel. The advantages were enough for Lodgewood president and CEO Arlene Gagne to put 11 more such conversions on order.

“It’s been a long process and a lot of work to get to this but I truly believe that being innovative in trucking is important,” Gagne said Wednesday during a media event at the company’s yard in the BCR Industrial Site.

“We want to be able to reduce our greenhouse gases immediately. We want to be part of the solutions in our province.”

The outfitting is being carried out by Vancouver-based Hydra Energy whose CEO, Jessica Verhagen, gave local media a guided tour of the rig, starting with an array of carbon-fibre-wrapped tanks fixed to the back of the cab and moving forward to a fuel-injection system attached to the engine at the front.

In the cab is an onboard computer that gives the driver some data and allows the truck can automatically switch entirely over to diesel once the hydrogen has run out. That typically occurs at the 1,000-kilometre mark.

Importantly, said Verhagen, the system was designed to avoid compromising the warranty on the engine and can be fitted onto “anything that burns diesel, is what it comes down to.”

The hydrogen comes from Chemtrade, which just so happens to be a byproduct of the chemicals it produces and supplies to the local pulp mills.

In February, Hydra landed a long-term contract with Chemtrade to provide the fuel with the aim of having a refueling station capable of servicing up to 65 trucks up and running  by sometime next year.

In advance, other fleet owners in the area with round trips no longer than 1,000 kilometres can arrange to test drive the Lodgewood converted truck by emailing info@hydraenergy.ca.

As it stands, Lodgewood’s current fueling station can support two trucks a day.

According to Verhagen, heavy-duty trucking accounts for just 1.37 per cent of vehicles on the road but 30 per cent of road-related emissions.

Hydrogen can drastically reduce that number because it emits only water although greenhouse gases can be produced in the making of the fuel.

So-called green hydrogen is made entirely from renewable energy with no associated greenhouse gas emissions while at the other end of the spectrum, black hydrogen is made from gasifying coal and without a method for storing the emissions. In between are blue, grey and even turquoise, yellow, purple and pink hydrogen.

“Ours doesn’t fall neatly into any of those categories because we’re taking it as a waste product from someone else,” Verhagen said but went on to add that Hydra brought in an independent consultant to do a life-cycle analysis from production to delivery to final use and found the output to be 5.6 grams per megajoule, compared to 75 grams produced by diesel.