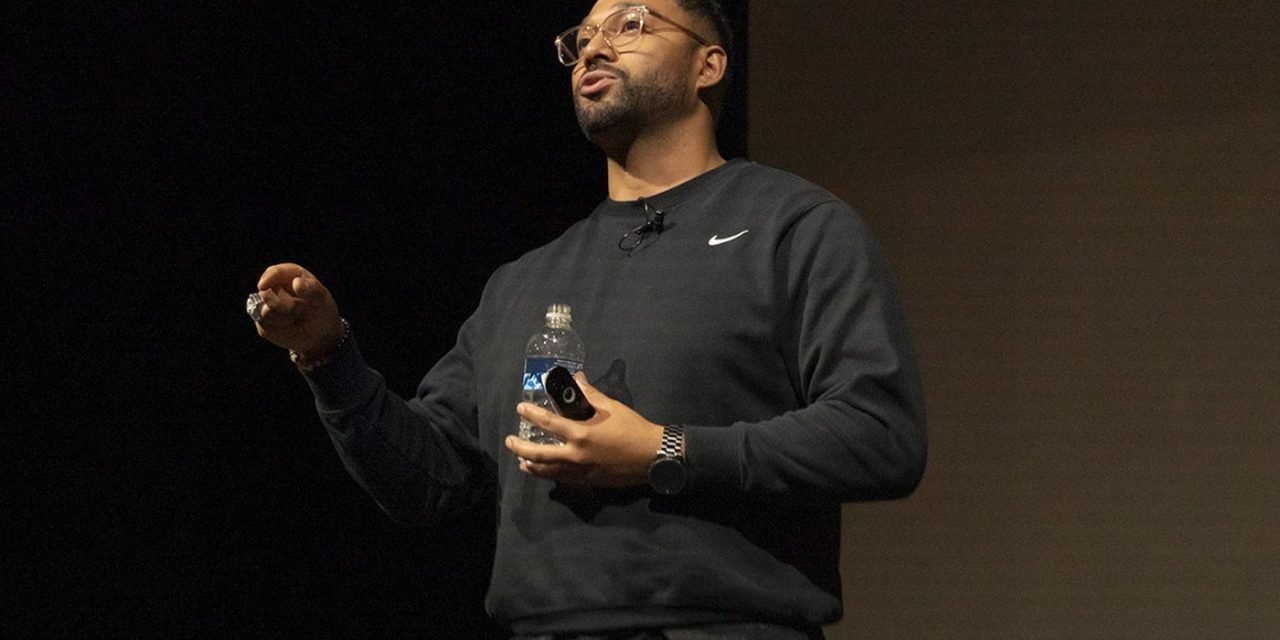 A former Canadian football champion RJ LaRose addressed more than 250 students in Prince Rupert to speak about breaking the silence on violence against women and girls, on Dec. 14.

LaRose, a former Edmonton Eskimos, BC Lions player and Grey Cup winner, shared his firsthand experiences about the impact male behaviour has on women and how to prevent and change dangerous situations for them. A father of two, LaRose witnessed his late mother be abused as a child, lost his sister to domestic violence and he was a victim of sexual abuse.

“Anytime you get to go in and work with youth it’s special in a sense that you’re hopefully able to make an impact,” LaRose said.

The ‘Be More Than a Bystander’ afternoon seminar held at the Lester Centre was filled to Covid capacity by youth from Charles Hays Secondary and Pacific Coast School, who listened to and engaged in the educational presentation about violence, sexual consent and how to prevent and change toxic male behaviours. A second evening presentation was held for the public.

LaRose said he focuses his presentations on removing the shame and stigma from conversations about adverse experiences happening to us.

Creating a safe space for people to feel comfortable and open up to talk is important, Rose said.

“The smallest action can make the biggest difference in someone else’s life. That’s why I got involved in this program,” he said.

This is LaRose’s third visit to the city this year and to share his message with businesses and industry. He previously visited in 2019 to host similar talks to the public.

Rosa Watson, attendee and mother of two sons and a daughter, believes the culture in Prince Rupert regarding men’s behaviour toward women has not improved over the past 20 years.

She said the seminar was a good reminder to reengage with her sons and other men in her life about their behaviour.

“I think not enough people are speaking up and saying something,” Watson said, adding after leaving the presentation, she will change her own behaviour and speak up more often.

“Now that I’ve been here and heard everything [LaRose] had to say, I think I need to say more with my … son. There might be more conversations that I need to have with … some of the men in my life because they unknowingly, sometimes, don’t realize what they’re doing or saying or acting,” Watson said.

Kristina Ediger, an evening seminar attendee, calls for more change in the behavioural culture toward women.

“I think there’s a lack of understanding from a lot of males in this town still — that a joke isn’t just a joke, and it is serious and could escalate,” she said.

Women are often placed with the blame if they are sexually harassed or assaulted because of their actions, such as drinking too much at a party. Men don’t have to share the same risks and burdens of their actions, Ediger said.