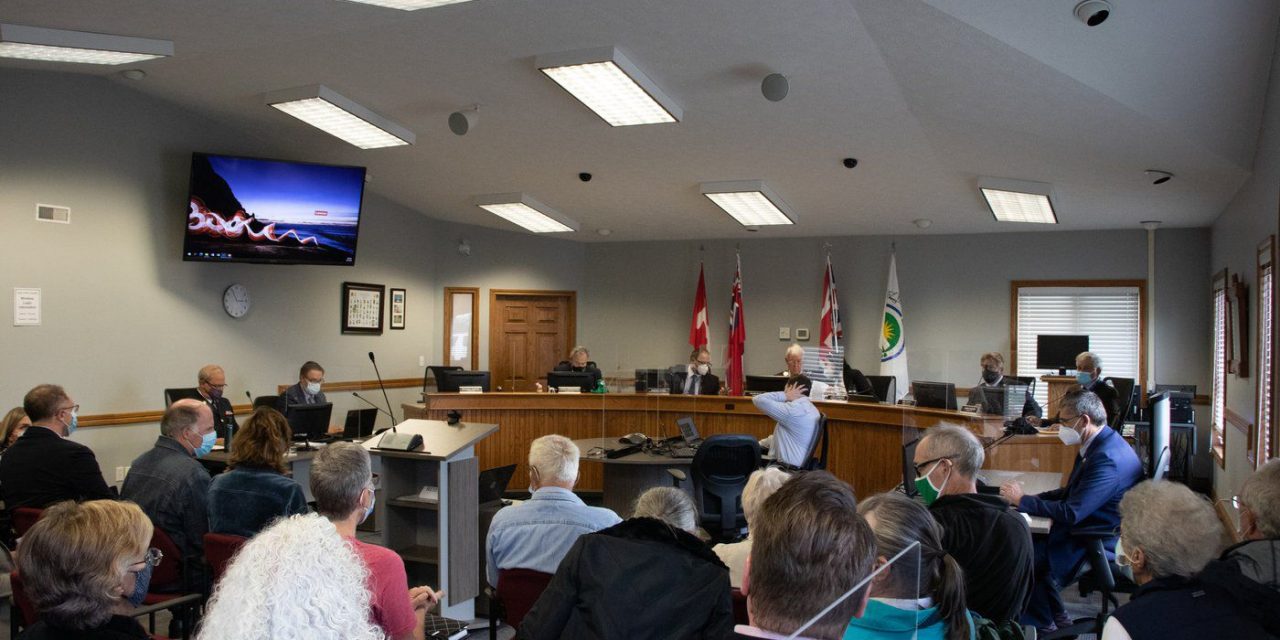 ERIN — Residents turned out in force Thursday afternoon to voice concerns about a huge ‘GTA-style’ developments being proposed for Erin.

Roughly 80 citizens were on hand for the mandatory public meetings at the town hall for development applications totalling over 900 new housing units on the western edge of town.

“That, to me, looks like a subdivision that’s been transplanted from the GTA. And I think most people in this town would agree with that,” Charbonneau said to applause.

Concern was raised due to the size of the overall development project and the huge population growth it would bring to Erin. Mayor Allan Alls said that development and density are currently unavoidable for Erin and the best solution is to manage the growth.

“I suggest for those in the room that are concerned about the density to take some time to read the latest bill passed by the province, Bill 109, which calls for more homes for more people. And I can tell you that the last subdivision plan that went forward to county got turned back here because it didn’t have the density that met that,” Alls said.

Councillor John Brennan said these and other future projects need to be shared with the greater community, not just those that live nearby, which is all that is technically required.

“I think the impacts of growth go well beyond the immediate neighbours. And so if we can do whatever we can do to publicize these open houses that the developers will all have to go through in the future, so that more people can be aware and more people can take part,” Brennan said.

Resident and council candidate Cathy Aylard took issue with the nature of one of the developments that make up the 900 units.

“There is 288 homes, zero per cent of them are for seniors or any kind of alternative housing. We’re digging up farmland and green spaces and this should result in some sort of approach to addressing affordability in our community,” Aylard said.

“I know the development is going to continue whether we have our complaints or not. But please take my requests into consideration just to make it a little bit easier on us, thank you,” Nicole Maciel said.

Maciel lives on a property directly next to the location of one of the proposed subdivisions. The current building plan involves a street going up along the side of her property.

One of Maciel’s several requests was to move the street away from her property.

“But most importantly, please move the road further away from our property line. If you look at the green strip, that’s .14 hectares, the blue strip next to it 1.53 hectares. I know Mattamy and Coscorp (two of the developers) have the resources to do this, please do it for the sake of my family. It will make the transition a lot less painful for us,” Maciel said.

Further requests from Maciel included trees and fencing along the side of the street that borders her property.

Maciel said she actually moved away from a Mattamy Homes subdivision to be in a quieter neighbourhood and now a new Mattamy subdivision is coming to her new residence.

“I want to be very clear to everyone here today that my concerns that I’m voicing are not based in my imagination, but first hand experience. Before moving to this property in 2016, I lived in a Mattamy townhouse in the Mount Pleasant division,” Maciel said.

“We specifically moved away to get away from the noise, congestion and to raise our kids in a safe and peaceful place,” Maciel said.

After voicing all of her concerns and requests, Maciel got a round of applause from the gallery.

Concerned citizen Martin Rudd on one hand noted the serious problems coming with the development but also brought up ways to make it work.

“We are getting 800 new houses. But we’re getting traffic, pollution, and a loss of a peaceful view of wildlife which was at the golf course.

“In any big transition like this, you know, how can we make this work? How can we compromise? To start off, that would be transparency with the builders, with information from the community, being available on the website, table those concerns and responses,” Rudd said.

Councillor Rob Smith made note of the small bridge in the area and what will happen to it.

“We (the town staff) are working with the developers, with them to fund the reconstruction of that bridge. So they are doing some preliminary design work now. How the costs will be shared, we’ll determine that at a later date,” responded Nick Colucci, director of infrastructure services and engineer.

This item reprinted with permission from   GuelphToday.com   Guelph, Ontario
Comments are Welcome - Leave a reply below - Posts are moderated