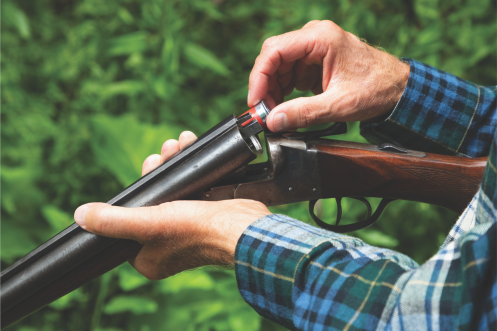 A debate over the legalization of harvest preserves has left the Alberta hunting community divided as two different groups, for and against the practice, lobby provincial and municipal governments and make cases for their respective positions.

Harvest preserves are enclosed areas of land where guests can pay to hunt and shoot animals like elk, deer and bison. The activity is currently illegal in Alberta, but some ranchers believe it’s a good source of revenue and would like to see the government repeal its legislation.

John Cameron, an elk and bison farmer located near Winfield, is one such person.

He’s chairman of the Alberta Elk Commission, a group that for the past year has advocated for the legalization of harvest preserves, sending its message up to the top, to Devin Dreeshen, minister of agriculture.

“We have a real need for it,” says Cameron. “Our markets to the U.S are jeopardized by the spread of chronic wasting disease in the wild and it just makes sense to have this second opportunity here in Alberta.”

Harvest preserves bring huge economic benefits, he adds, not just through animal sales and hunting fees, but through tourism opportunities.

He says his ideal hunting farm would resemble a retreat —600 acres of land with roaming herds of elk for visitors to hunt, and plenty of opportunities for the whole family, including kayaking, camping, cabins, cross-country skiing, Indigenous arts and crafts, survival courses and archery shoots.

In turn, these activities would provide steady jobs for guides, kitchen and maintenance staff, housekeepers, drivers, instructors and office administrators.

Elk farming in its current state, he adds, places the Alberta market at a competitive disadvantage in comparison to the U.S. — where harvest preserves are legal — causing farmers to lose direct revenue and economic benefits.

“We’re watching these bulls go south and seeing this 300 per cent markup go to the end user, when those users could be up here in Alberta helping improve our economy,” he says.

“The wording of this, as cervid harvest preserves, gives the impression to the uninitiated that we’re dealing with some innocuous little thing,” says Victor Benz, AFGA president, adding that the industry could lead to the spread of chronic wasting disease and invasive species to wild environments, genetically contaminate wild herds, disrupt wildlife movements and contribute to habitat fragmentation.

AFGA has been fighting for the welfare of all game animals since the late 1980s, when game ranching, which is legal, was first proposed. Although AFGA had no success dissuading the government from taking up this practice, it has been able to halt AEC’s two previous attempts to legalize harvest preserves.

“We’re up against a well-funded group with very strong long-term connections, particularly with connection to the Conservative party,” he says.

In August, when AEC began seeking letters of support from municipal governments, AFGA followed suit with letters warning local councils about the negative effects of the industry. Letters from both groups were presented at an MD council meeting in September, but councillors have yet to release a public statement on the matter.

Hillcrest Fish and Game Protective Association, a non-profit organization based in Crowsnest Pass, opposes the practice as well.

“Any small economic benefit that they may provide is not near as important as protecting our wild cervid populations from the many diseases associated with cervids in captivity, including chronic wasting disease,” writes association president Brian Vander Linden in an email to Shootin’ the Breeze.

Vander Linden presents his statement on behalf of the Hillcrest board.

He describes harvest preserves as an unethical form of hunting, as cervids are kept in an enclosed space, eliminating the animal’s right to fair chase, and he urges the Alberta government to continue to deny requests for industry creation.

Cameron, however, rejects these statements.

“The concept of shooting fish in the barrel, we’re not after that at all,” he says. “We’re looking for an experience to bring other clientele to Alberta…. They can be a lot closer to the animals that they’re eating.”

This item is reprinted with permission from Shootin’ the Breeze.