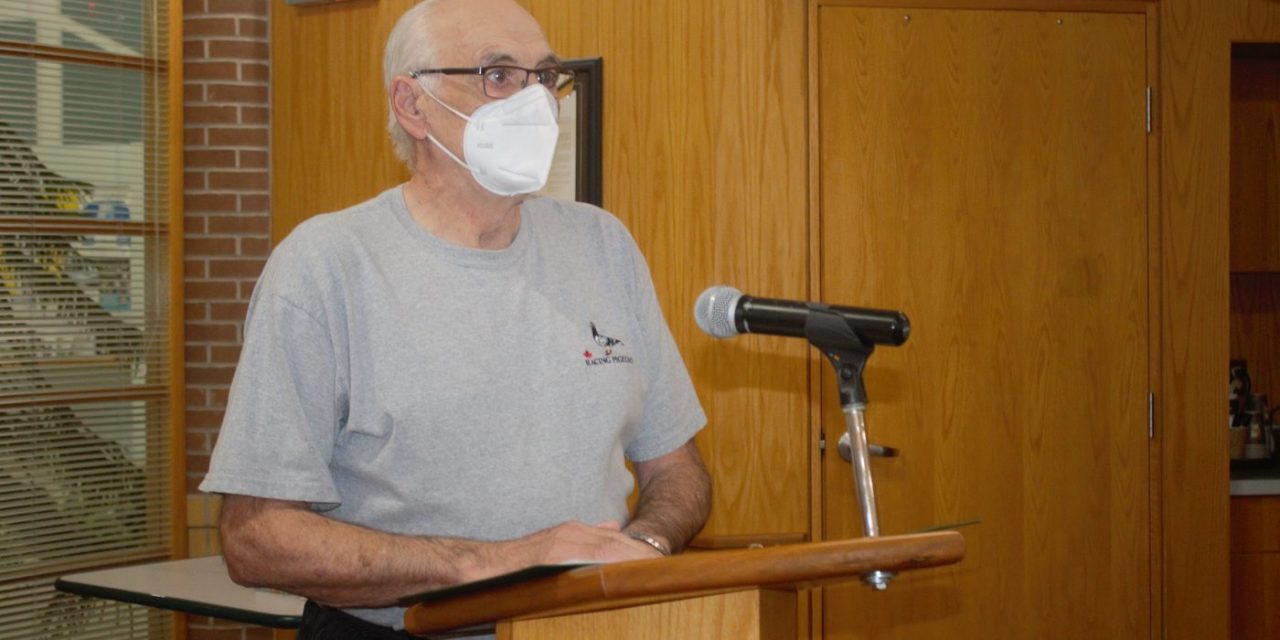 Photo: Ken King, vice-president of the Canadian Racing Pigeon Union, spoke to Melfort council on Nov. 8, requesting that they change their bylaws to allow for domestic pigeons to be kept. Jessica Durling, Local Journalism Initiative Reporter

Ken King, vice-president of the Canadian Racing Pigeon Union, spoke to Melfort council, requesting that they change their bylaws to accommodate domestic pigeons after one of their Melfort members received a municipal complaint.

Marlon Belista had begun raising racing pigeons in Melfort three years ago after he contacted the Canadian Racing Pigeon Union and was told the city did allow the birds.

In August, he received a letter from the city that a complaint had been lodged about the birds and he would have to move them outside the city.

King said the Canadian Racing Pigeon Union made a mistake by looking into the city’s animal control bylaw rather than the livestock bylaw which bans the birds. Now the Union is requesting the city look into changing their bylaws to allow the feathered animals to roost within city boundaries.

“We currently have members in the City of Melfort which need a bylaw approved to be a part of this great sport of flying pigeons,” King told council on Nov. 8. “Other towns and cities have adopted a bylaw for keeping the pigeons, with limits, which helps keep the fanciers happy and their neighbours.”

When asked how many pigeon owners, also known as “fanciers,” may live in Melfort and the surrounding area, King said he was led to believe that there are three or four as well as several more that would like to be involved but are hesitant due to the livestock bylaw.

He said that on average each fancier has about 20 to 40 of the birds, with each taking about one to two square feet in a loft.

“They’re normally kept in and they’re only released for exercise or competition,” King said, adding that exercise takes about an hour-and-a-half to two hours twice a day.

Glenn George, Melfort’s mayor, said the topic will be brought to committee of the whole for discussion before being taken to December’s council meeting.

Saskatoon is one city whose animal control bylaw does permit the domestic birds to be kept— with restrictions.

According to the bylaw, no loft or flight pen shall be constructed, erected, placed, altered, renovated, or relocated without having first received the approval of the general manager of the community services department or their delegate for the City of Saskatoon.

To place a loft, the owner must submit plans that demonstrate that the loft will be located a minimum of twenty feet from the area in which the construction or location of a school, church, dwelling, or other premises used for human habitation or occupancy is permitted, excluding the premises occupied by the owner of a loft or flight pen.

Currently Belista’s flock, containing just over 20 birds, is being held with friends in St. Brieux and Humboldt.

“The problem now is it’s winter time, that’s the main thing,” Belista said. “They can survive but it’s really not good for them.”

He said that ideally, he would like to see the bylaw changed so he could return his birds, with limitations in place and inspections as necessary.

“They are usually like a pet for us,” he said. “You really take good care of them. You give them a bath, give them the good food, the vitamins and everything so that they’re really healthy… We know that there’s a lot of pigeons here but they’re different from the ones that we have.”

This item is reprinted with permission from Humboldt Journal. See article HERE.