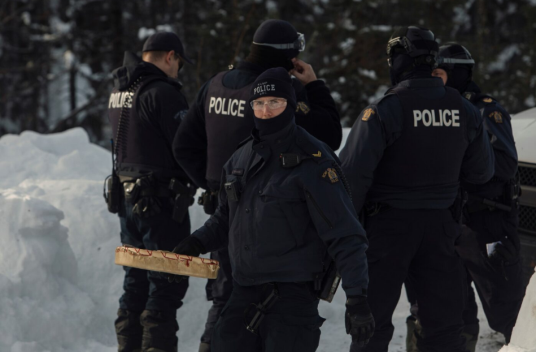 RCMP arrested two journalists, including photojournalist Amber Bracken, on assignment for The Narwhal, during police enforcement of a Coastal GasLink injunction in northwest B.C. Friday.

The arrests of Bracken and Michael Toledano have prompted widespread condemnation from media rights organizations, with the Committee to Protect Journalists and the Canadian Association of Journalists both calling for their immediate release.

“The RCMP, for whatever reason, continues to act with impunity and they are continually working to subvert law and best practice and that can’t be tolerated,” said Canadian Association of Journalists president Brent Jolly, pointing to RCMP limits on press freedoms at Fairy Creek logging blockades earlier this year.

Prior to Bracken’s arrest, RCMP told The Narwhal they were aware journalists were at the site and said they conveyed the information to the officers before units advanced.

“As long as she is clear with the members on the ground there shouldn’t be any issues. I will pass along the information to the officers out there,” Staff Sergeant Janelle Shoihet wrote in an email Friday morning.

Tactical units advanced on the occupation of the pipeline drill site near the Wedzin Kwa (Morice) River on Friday morning, and in the early afternoon Sleydo’ Molly Wickham, a wing chief in Cas Yikh house of the Gidimt’en clan, was arrested, along with Jocey Alec, daughter of Hereditary Dinï ze’ (Chief) Woos, and 13 others, including Bracken and Toledano.

The arrests were made with the use of canine units and snipers. RCMP broke down the door to a tiny home with an axe to remove Wickham, Bracken and others, while officers used a chainsaw to extract Alec from a cabin on the drill site. Dinï ze’ (Chief) Woos was prevented from accessing his territory as police made the arrests.

RCMP refused to release Bracken from custody Friday evening and told The Narwhal she would be transferred to the Smithers detachment, then to Prince George where she would be held until a bail hearing on Monday. The RCMP would not disclose the details of why they were detaining the two journalists.

The arrests of Bracken and Toledano come in the same year a coalition of media organizations, including The Narwhal, launched and won a B.C. Supreme Court case against the RCMP after police restricted journalists’ access to the Fairy Creek blockades.

“Every time this happens, the RCMP seems to want to hide behind a curtain and execute their orders in complete darkness,” Jolly said. “Maybe that’s okay in a dictatorship, or in a totalitarian country, but it’s not acceptable here in Canada. Transparency matters.”

Last year, Bracken won the Charles Bury award from the Canadian Association of Journalists for her “outstanding contributions to journalism” covering the events of early 2020 on Wet’suwet’en territory for The Narwhal. In her acceptance speech, she said, “Considering the times we’re living through, it’s more important than ever that we be really tenacious about defending our right to report.”

On Thursday, when the RCMP moved in to enforce the Coastal GasLink injunction, police arrested land defenders, legal observers and a journalist. The journalist was subsequently released, with no charges, and nine others were held overnight and released after a court hearing in Smithers on Friday afternoon.

Reactions to the ongoing police action on Wet’suwet’en territory include rail and road blockades across the country. On neighbouring Gitxsan territory, heavily armed RCMP officers removed a blockade on the CN Rail line in New Hazelton early Friday afternoon.

Human rights organizations, including Amnesty International, are calling on the province and the federal government to withdraw police and security forces. In an open letter on Nov. 18, Grand Chief Stewart Phillip, president of the Union of BC Indian Chiefs, condemned the actions.

“We are absolutely outraged that the province of B.C. authorized a military-style raid on peaceful land defenders in order to allow Coastal GasLink to build their liquified natural gas pipeline, while much of the province is suffering from life-threatening, catastrophic flooding related events.”

The Coastal GasLink pipeline, owned by TC Energy, would span 670 kilometres and cross 190 kilometres of unceded Wet’suwet’en territory, connecting natural gas sources in the province’s northeast with the LNG Canada facility currently under construction in Kitimat.

“We are calling on B.C. and Canada to recognize and uphold Indigenous Title and Rights, including the right to self-determination, and institute a moratorium on fossil fuel expansion in the wake of clear and present climate catastrophe,” Phillip wrote.

Gidimt’en land defenders and supporters first occupied the drill site on Sept. 25, 2021, to prevent the company from drilling under the river.

Wickham, who is the Gidimt’en camp spokesperson, said they had no choice but to enforce an eviction order — first issued by Wet’suwet’en hereditary chiefs issued on Jan. 4, 2020 — after 50 days of occupying the site without meaningful response from B.C. and the federal government.

“It just got to the point that we’d had enough and it seemed like the right time,” she told The Narwhal in an interview before the arrests. “We cannot afford for Wedzin Kwa to be destroyed.”

Wickham, acting under the authority of Dinï ze’ Woos, Frank Alec, gave workers eight hours, plus a two-hour extension, to “peacefully leave the territory” on Sunday, Nov. 14, but only a handful complied. When the deadline lapsed, Wet’suwet’en, Haudenosaunee and supporters seized a Coastal GasLink excavator and dug up the road, the only access route to Coastal GasLink project sites and work camps housing some 500 people.

“Today’s enforcement was dictated by the actions taken by protesters that blocked the Morice River Forest Service Road that jeopardized the safety and wellness of hundreds of people whose provisions were at critical levels,” Eric Stubbs, officer in charge of criminal operations for the RCMP wrote in a statement Thursday. “We have made significant efforts to facilitate meaningful dialogue between all stakeholders, and specifically with the group opposing this pipeline project, to no avail. It was no longer possible to delay our efforts to rescue the workers. As such, our enforcement operation had to proceed immediately.”

The occupation of the drill site, where RCMP cut off all power, phone and internet access to the land defenders Friday before making the arrests, did not impede access to the Coastal GasLink work camps, which regained access to food and supplies.

Wet’suwet’en hereditary chiefs, and their supporters, have voiced their opposition to any pipeline construction on the territory for over ten years. In December of 2019, a court issued an injunction against blockaders, giving RCMP officers authorization to make dozens of arrests last year, when land defenders blockaded the road and prevented work by the pipeline company and contractors.

During both the 2020 police action and current enforcement, RCMP set up exclusion zones, preventing the media from accessing and documenting the events.

“Every day is turning into Groundhog Day,” Jolly said. “We’re continually going through the same arguments, the same practices, the same channels over and over and over again, and we’re not seeing anything different happening. In fact, it’s getting worse.”

This item is reprinted with permission from The Narwhal. See article HERE.