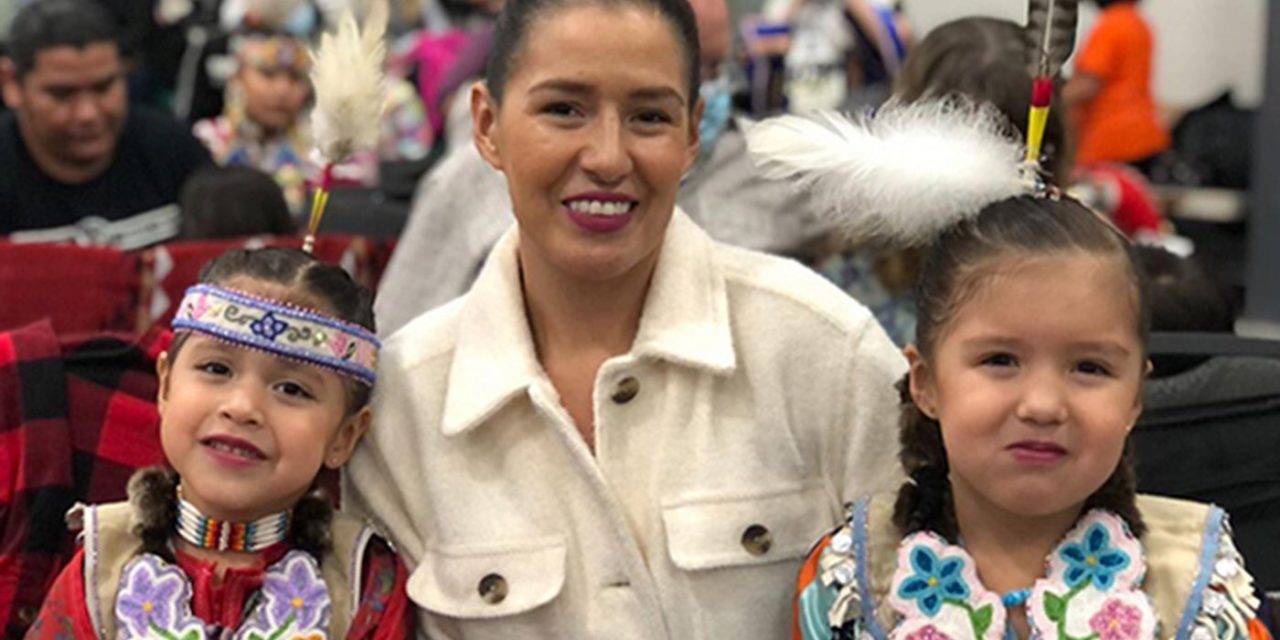 (ANNews) – Red Deer played host to the 1st Annual Red Deer International Powwow (RDIP) with an added feature of a youth day. The three-day event was held at Westerner Park on Oct 22, 23, and 24, 2021.

The event was titled Powwow Times presents the 1st Annual Red Deer International Powwow and many Indigenous dancers from central Alberta came together to embrace their pride in culture and share with their non-Indigenous neighbours.

According to the website, the RDIP event was an opportunity to connect people with Native American Culture, Teachings, and Knowledge about Indigenous people of North America and their unique way of life.

Mitsuing says the morning of the first day was a youth event that included six educational breakout sessions.

“The neighbouring school division was invited to come out. Ninety percent of the participants of the breakout sessions were non-Indigenous youth,” said Mitsuing.

The remainder of the three-day event was about showcasing powwow dancers and singers. Dancers from across central Alberta came out to participate in the powwow.

“As an Indigenous mother, my perspective was on being able to have my children participate in a safe and family-friendly event,” said Karlene Cutknife, a Maskwacis resident whose children were participating at the powwow. “We were able to get out of our home and community which is dealing with a lot of community grief. The powwow brought joy to our hearts again.”

Cutknife said that their spirits were lifted once they heard the drums and watched the other traditional powwow dancing. “My children’s faces lit up with joy. My children were full of happiness and vibrant energy,” she added.

“My father Willard Cutknife came along with us to the powwow. Everyone at the powwow stopped to acknowledge him. He is a respected powwow dancer. He taught me as a child to dance; that led my children and community of Maskwacis to learn about powwow dancing.”

She explained that powwow dancing is more than being a part of the powwow circle. The heart of powwow is about healing and getting well. The powwow drum provides a sense of healing for participants and spectators.

“The prayers and blessings by elders at the powwow protect us. Powwow dancing is a way of connecting to our spirit too,” noted Cutknife.

The MAG website states, “The exhibit was titled Ohcîwin, which is a Cree word meaning “The Origin” or telling of a story where something originated.

“Powwow! Ohcîwin The Origins features seven powwow dance styles, with full Regalia and craftwork.  Curators and creators, Patrick Mitsuing and Marrisa Mitsuing, have gathered the stories, worked with the Artisans, and carefully built the Regalia for this exhibition.”

He says when the Powwow! Ohcîwin exhibit at MAG ended, news broke of the recovered remains of 215 children buried at the site of the former Kamloops Indian Residential School.

“We wanted to do something to honour the children. Turns out a lot of other people in Red Deer wanted to do the same,” said Mitsuing.

He says they created powwow talks. From these powwow talks or conversations, the idea of creating an international powwow in Red Deer was born.

A little background: on Powwow Times.

Mitsuing says Powwow Times is a company that is owned by Indigenous performers and educators who came together to showcase Indigenous culture and powwow through various social media platforms.

“We initially started traveling across Canada and began recording powwows. We edited the videos and published them on Youtube and Facebook,” said Mitsuing.

“From there Powwow times started working with schools, bringing cultural events to communities and schools.”

“None of this would have been possible without the strong allyship within the Red Deer community,” said Mitsuing.