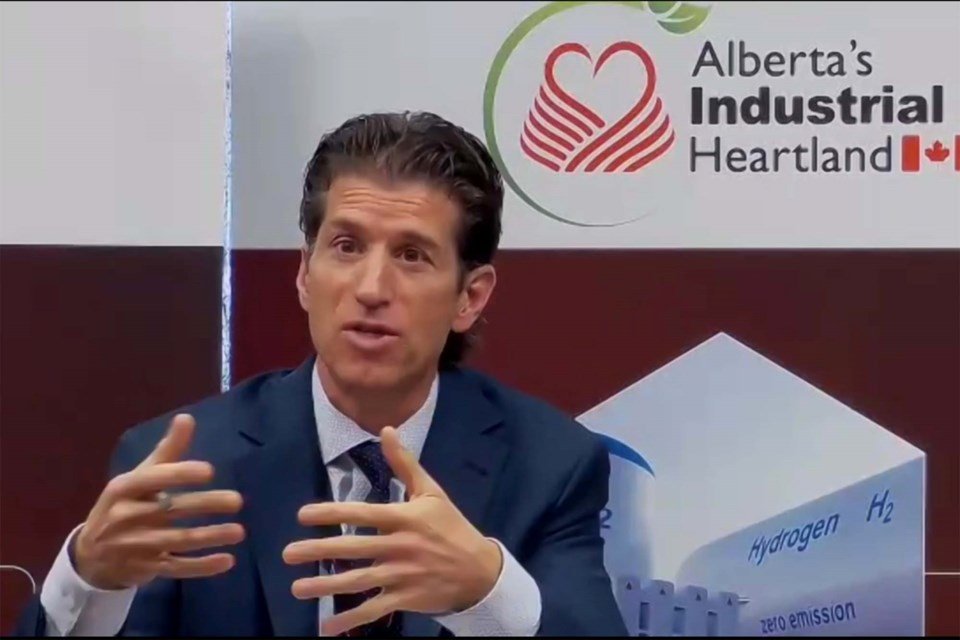 The Edmonton region is a future hotspot for the hydrogen economy thanks to expertise, motivated companies, and experience with similar technology, says a local expert.

The region is positioned well to benefit from the shift to hydrogen Mark Lea-Wilson, hydrogen hub lead from The Transition Accelerator, said during a webinar on Oct. 28, hosted by Edmonton Global on hydrogen in the region.

The Transition Accelerator is a Canadian charity that works to solve business and social challenges, including the transition to green energy.

“The Edmonton region has a real structural competitive advantage for producing the lowest-cost, lowest-carbon hydrogen in the world,” Lea-Wilson said.

But to take advantage of it, the region needs to construct a new value chain.

The region has set up working groups with organizations that intend to adopt to hydrogen, which is creating new market demand. So far, more than 100 organizations have helped support the value chain.

“We’ve identified investment requirements in the range of $10 billion to $12 billion out to 2032, and an investment gap in the $2-billion range. This is why looking at economic viability is important, as we’re going to need to close these this economic gap as efficiently as possible,” Lea-Wilson said.

The region has a competitive advantage with low feedstocks, and low prices for natural gas in the province, which is required for hydrogen production, said Mark Plamondon, executive director of Alberta’s Industrial Heartland Association.

Alberta’s biggest competitor for natural gas, the Gulf Coast, has higher rates of natural gas by at least 35 per cent, Plamondon said.

The has region has established carbon capture and storage infrastructure.

“The geology that sits beneath the ground here in Alberta, and particularly in Alberta’s industrial heartland, is conducive for significant quantities of carbon-capture storage,” Plamondon said.

There are around $100 billion in regional opportunities in the hydrogen industry, said Malcolm Bruce, CEO of Edmonton Global.

Part of the advantage the region has is that many pipelines meet in Edmonton, Bruce said.

“If you ever look at a pipeline map in this country, you’ll see that much of the pipeline infrastructure in a major way … emanates from the Edmonton metropolitan region,” Bruce said.

In other areas of the world, such as Europe, hydrogen plans propose building out 40,000 kilometres of pipeline, while in the Edmonton region that infrastructure is already in place.

Establishing hydrogen in the region will help dramatically reduce emissions in the industrial sector and help give Canada an advantage in the future low-carbon economy.

While hydrogen opportunities have been around for a while, Campbell said this is the time for the region to move forward with the technology.

“What’s different now I would say, is technology has advanced for production and use of hydrogen to the degree that it’s now commercially viable,” Campbell.

And to succeed the region needs to work together.

Canada shifting to alter emissions in vehicles from 2025 and having all new vehicles sold in 2035 to be net-zero will cause a huge demand for hydrogen, said Kaoru Sakaguchi, general manager of mobility business with Mitsui, but there will be some challenges to get there.

“Hydrogen fuel infrastructure is still virtually non-existent in Canada and requires robust build out. It will take some time to convince people to buy hydrogen cars, too,” Sakaguchi said.

The hydrogen economy is changing quickly, Sakaguchi said, with the cost of pure hydrogen coming down rapidly, which will help increase the demand for the product.

Hydrogen might cost a bit more to fill up a vehicle, Sakaguchi said, with the price estimated around $70.50 to fill up an empty tank, compared to gasoline at around $60.