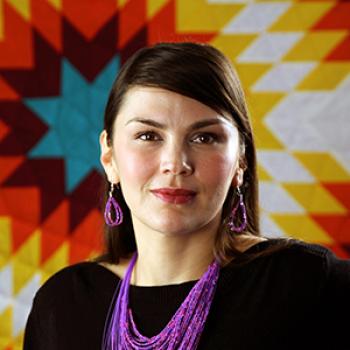 As the bodies of Indigenous children who died at residential schools are being reclaimed, so must the cultural objects and remains of Indigenous ancestors that are now in the possession of museums, universities and other colonial institutions.

“I believe that we do need to know how many ancestors are out there because I think this is one of the next waves that is going to happen. Once we find all the children from the Indian residential schools, we’re going to have to start looking for the ancestors that were taken and we’re going to have to start looking for these cultural objects, these ceremonial objects that were taken at the same time as these children,” said Dr. Jaime Lavallee from the University of Saskatchewan College of Law.

Lavallee, of the Muskeg Lake Cree Nation, was one of two university professors presenting on the topic “Forging a new path in the protection of Indigenous intellectual property.” The webinar was offered last week by the Intellectual Property Institute of Canada.

Lavallee said documents from the director of the anthropological division of the Geological Survey of Canada in the 1920s indicated the urgency to collect the ceremonial and cultural objects from the older people before they were lost. Lavallee pointed out that potential for loss was created by the government who forced the younger generations into residential schools, removing the ability of the parents and grandparents and Elders to pass down their cultural knowledge and traditional knowledge.

The items, according to the director, would be collected for the public good.

“As part of this public good, it’s not good for me to have my cultural objects either on display or in storage somewhere else continuing this disconnection, continuing this loss,” said Lavallee.

Repatriation of both objects and ancestral remains is necessary, she said, as part of reconciliation and intergenerational healing.

Dr. Catherine Bell, a non-Indigenous professor from the University of Alberta specializing in Indigenous rights, access to justice, cultural heritage law, collaborative research and ethics, said property law reform was necessary as intellectual property (IP) rights do little to protect cultural expression and traditional knowledge, which is interwoven into the cultural and ceremonial objects that are housed or stored in colonial institutions.

“(This brings) into focus some of the challenges that Indigenous peoples face in having their laws and processes and protocols respected within the current Canadian legal order,” said Bell.

She cited as an example of tangible and intangible harms the removal of bundles from Blackfoot communities have.

“When these bundles are removed from the community, the knowledge is also removed with them,” she said, as certain songs can’t be sung, certain words can’t be spoken and certain ceremonies can’t be performed.

“From a western framework we might think of that as tangible. It was very much for them about knowledge and intellectual property.”

Bell said that through the lens of Indigenous human rights, the current IP laws further colonialism and discriminatory practises.

She pointed to the findings of the Truth and Reconciliation Commission (TRC) on the legacy of Indian residential schools, which in its 2015 final report referred to the losses suffered by Indigenous peoples as “cultural genocide.”

“This is what property law has done and facilitated since its enactment,” said Bell.

The TRC’s report includes three Calls to Action, 67 to 70, that direct, in part, the federal government to provide funding to the Canadian Museums Association (CMA) and the Canadian Association of Archives to work with Indigenous people to undertake reviews of policies directed at museums and archives.

That is not enough, said Lavallee, nor is it enough to depend on the good will of museums and universities when any action to be taken has to be initiated by Indigenous communities.

For that to happen, she said, First Nations have to put aside pressing concerns for boil water advisories and high suicide numbers to research which of their ancestors or artifacts is in which museum or university.

Dedicated funding is needed for Indigenous peoples to undertake that repatriation work and it’s almost impossible without mandated legislation or policies from provincial governments, said Lavallee, as museums and universities fall under provincial legislation and not federal control.

“It’s about having that access and that control be placed back into the Indigenous nation’s hands and not left in the settler museums or people of a different culture with a different perspective with a different worldview that won’t understand the intangible and tangible aspects that aren’t cognizable to the western legal system,” said Lavallee.

“There’s intangible aspects of changing that narrative from cool art to ancestor.”