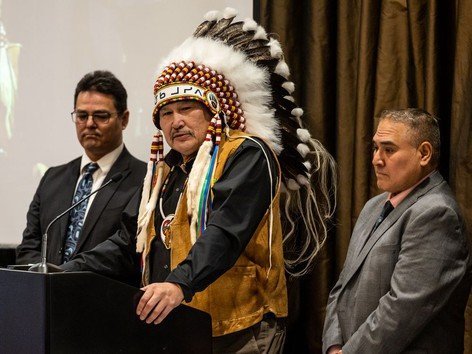 A new facility focused on land-based education in northern Saskatchewan is at the centre of talks between Prince Albert Grand Council and Saskatchewan Polytechnic.

They have signed an agreement to expand education opportunities, including creating an Indigenous encampment at the Hannin Creek Education and Applied Research Centre on Candle Lake.

“It is a key component of our plan to establish an alternative energy program with the goal of developing food production and security in northern Saskatchewan,” PAGC Grand Chief Brian Hardlotte said.

The agreement also aims to develop curriculum to “advance the level of Indigenous participation in the energy sector,” he added.

A Saskatchewan Polytechnic spokeswoman said the encampment doesn’t have a firm opening date — the agreement signals the beginning of talks.

The new encampment would allow land-based “applied research projects, cultural awareness and language acquisition training, along with education about the history of Indigenous people,” a news release said.

Hardlotte said the agreement also aims to share the importance of integrating Indigenous culture and languages into the classroom.

“It will provide increased opportunities for our students and staff to learn about the history and culture of Indigenous peoples, and will serve to promote intercultural understanding, empathy and mutual respect,” Saskatchewan Polytechnic president Larry Rosia said in a prepared statement.

Hardlotte used the example of his experience speaking to new conservation officers about Treaty rights and responsibilities as a way of interweaving education with Indigenous perspectives.

Hardlotte said he also hopes those conversations will impart some understanding of the impact of intergenerational trauma from the residential school system.

Until then, the discussions will help open the institution and its programs to Indigenous students and youth entering the job market, he said.

“The Treaty right to education does not stop at Grade 12. It goes into post-secondary.”

This item is reprinted with permission from The StarPhoenix, Saskatchewan. See article HERE.