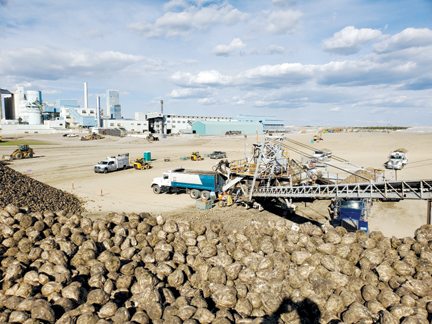 “I want to cover four main areas; where we’re currently at as a sugar beet industry, where we’d like to go, how we’re going to get there and who we’d like to come along with us,” said Garner-Skiba. “Being in the town of Taber you truly understand the importance of the sugar beet industry and the refined sugar industry here in Taber. The amount of jobs it creates, and the GDP it contributes. we just recently did an economic impact assessment of the industry and we contribute over 2,100 jobs and over $248 million in GDP. While that may seem small when compared to things like wheat and barley — we’re a small crop. We punch well above our weight. We’re the sole source of 100 per cent Canadian Sugar, 90 per cent of the sugar Canadians consume comes from places like Vietnam — it benefits their farmers, not ours. We want to change that.”

Garner-Skiba mentioned there was an increase in the amount of sugar that’s able to be exported to the United States from here — however, she noted it was the United States and the growers that asked for that — not the Canadian government.

“We want to ask for a Domestic Sugar Policy. This is a policy that exists in every major trading nation except for Canada, we are the only one that does not have one. We believe that by asking our federal government for this policy we can increase food security for Canadians. Sugar flew off the shelves over COVID — and what happens if the situation on the west coast continues? Those boatloads of raw cane sugar are not in the port. But we can do more here and grow more at home.”

“Our sugar policy has nothing to do with a direct subsidy. If 1.2 million tonnes of raw cane sugar is imported a year, maybe we only want 900,000 tonnes imported, and that way we can do more here. Our refiners have made an incredible commitment to the industry — and we want them to look forward for further investment. We want to work with them and encourage them. That’s what this policy is asking, for a restriction on raw cane sugar being brought in. It’s also asking for an increase in the percentage of sugar-containing products made using beet sugar. We want a prioritization in sugar beet exports, NAFTA has a priority for the export to be beet sugar, but the rest can be filled by cane sugar that’s brought in and refined. How does that benefit Canada? That benefits farmers in other countries.”

Coun. Garth Bekkering was the first to speak after the presentation.

“Are you aware of any area in Canada that are perhaps thinking of starting a sugar industry if there is a domestic sugar policy in place?”

“Absolutely,” answered Garner-Skiba. “We reached out to the American Sugar Beet Growers Association and they do have a definite interest in this and as sugar beet growers in Alberta, we don’t have a problem with that. They could supply the eastern seaboard and we could supply the western seaboard.”

A motion was made that council accepts the presentation and direct Administration to draft a letter of support for the Alberta Sugar Beet Growers and their initiative.

This was carried unanimously.

This item is reprinted with permission from The Taber Times, Taber, Alberta. See article HERE.