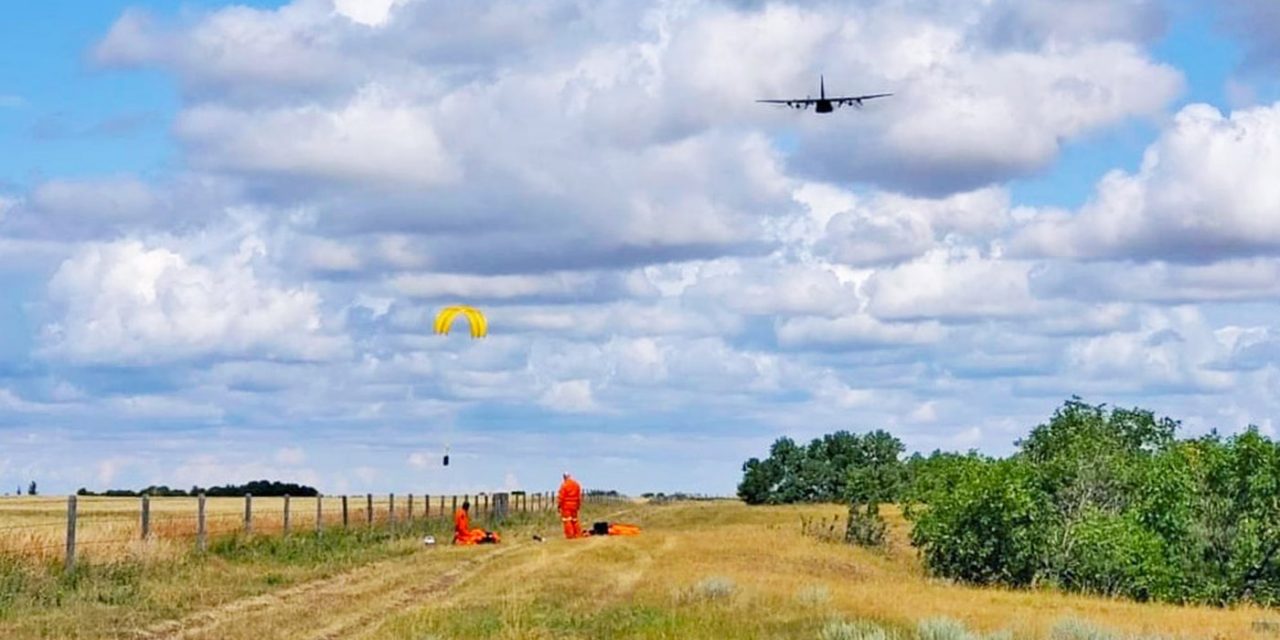 On a bright sunny hot day in August, Frank Schuurmans and Al Bateman are standing at the Lumsden Calhoun Airfield in front of a previously wrecked yellow crop duster with eyes and ears to the sky.

The previously wrecked plane is tucked against the tree line to simulate a crash site for the training exercise for the Canadian Armed Forces elite Search and Rescue crew.

Schuurmans is the Provincial President of the Civil Air Search and Rescue Association (CASARA). He is also a search and rescue pilot and drone operator for the organization. Bateman is a CASARA navigator and ground homing specialist.

It comprises over 2000 members across Canada, with a presence in all ten provinces and three territories. In Saskatchewan, there are 250 members comprised of pilots, spotters, navigators, drone operators, and ground support. In Saskatchewan, CASARA also aids the RCMP in searches for missing persons.

For today’s training exercise, a personal locator beacon is placed near the aircraft. A C-130 Hercules is conducting training for its crew across the country has left Winnipeg and will be homing in on the beacon. And once located, they will drop streamers to determine wind indicators that will assist the Search and Rescue Technicians (SAR Techs) in their jump to the simulated crash site. Once they are on the ground, their equipment is dropped.

The crew in the Hercules consists of the pilot, spotter, navigator, and SAR Techs. Capt. Darryl Dubuc is the Training Officer on the C-130 running the training exercise and evaluations of the crew. SAR Techs are highly trained search and rescue specialists who help people in distress in remote or hard-to-reach areas. In addition, they provide advanced pre-hospital medical care and are trained to a primary care paramedic national standard.

The beacon sends the signal to a satellite which is then relayed to a rescue coordination centre at one of several locations across the country that will dispatch the crew. Schuurmans said once they are close, they will usually hear the aircraft before they see it. It will take an hour to get to our location from CFB Winnipeg.

We hear the craft approach well before we can see it, and it flies over at 12,000 feet. Schuurmans says the information the crew has is there has been an overdue aircraft with an approximate location of the Lumsden Airport. The Hercules takes several passes over us as it circles, attempting to narrow down the signal.

Once the location is determined, the hatch drops down, and the wind indicators are released—colourful streamers in red, blue and yellow float to the ground. Then a radio pack is dropped before the SAR Techs jump from the craft, diving through the air, chutes expanded, landing in the wheat field that flanks the airstrip.

Landing within proximity of each other, the SAR Techs gather up their chutes and heavy packs as they trudge through the waist-high wheat and over the barbed wire fence that separates them from the beacon and the downed crop-duster.

Vincent Benoit and Trevor Pilgrim are the SAR Techs on this training exercise. Benoit has been doing this work for five years and is new to the Squadron. He came from CFB Trenton, and Pilgrim is newer with two years under his belt in search and rescue. To become a SAR Tech, you need to spend at least four years in the military before making the jump.

Apologizing, they feel bad that they’ve landed in the farmer’s crop. From the air, it’s hard to tell the depth of a crop until you are in it.

Next comes their gear. There are two drops down to the site. The first lands near its intended target, but the wind dies, and because there is no wind when its chute opens, it falls straight down without the drift it should have taken. It misses its mark and gets caught up in a tree on the side of the hill. But this is precisely why there is training. Benoit retrieves a knife from his pack and treks down the hill to free the pack. It’s hard work as it down a steep hill and caught well into a tree, and the drop is heavy, but they are in peak physical condition.

Overall, they say that while it’s the first time for a few of the crew for a training exercise, it went very well. With this training exercise complete, the Hercules is heading to Alberta for another exercise, and if the smoke isn’t too heavy in BC, they will be off for an exercise in mountain searches.

CASARA’s public profile flies under the radar, so to speak. “It’s just people doing their job volunteering their time to save lives,” says Schuurmans.

This item is reprinted with permission from Last Mountain Times. See article HERE.